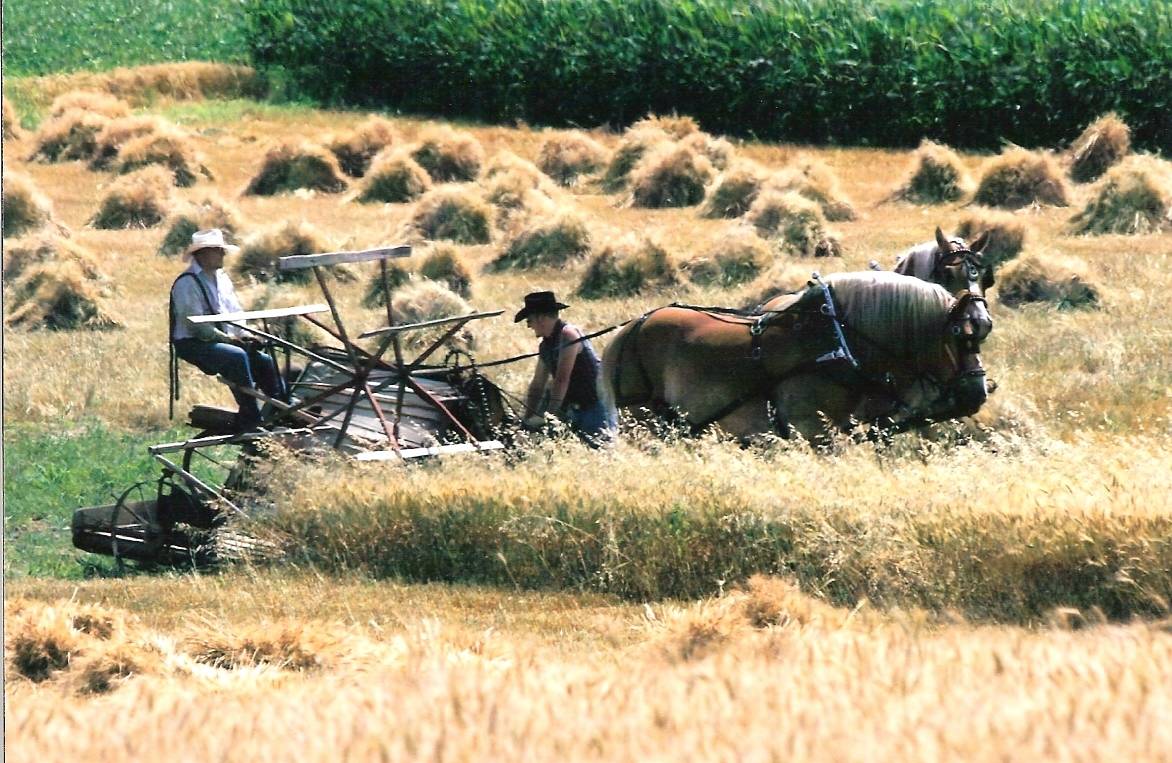 Jefferson County, Kansas. The following is a short excerpt from a longer essay in the forthcoming book The Humane Vision of Wendell Berry, co–edited by our own Mark Mitchell.  Mark it down on your purchase list for next year.

After utility, people are for freedom.  That is, without the ability to provide for our own needs and the needs of those closest to us, we are less than fully human.  [Wendell] Berry clearly recognizes that certain tools magnify human freedom while others diminish it.  It is interesting, again, to note [Ivan] Illich’s essential characterization of industrialization as a form of imprisonment:

People need not only to obtain things, they need above all the freedom to make things among which they can live, to give shape to them according to their own tastes, and to put them to use in caring for and about others. Prisoners in rich countries often have access to more things and services than members of their families, but they have no say in how things are to be made and cannot decide what to do with them. Their punishment consists in being deprived of what I shall call “conviviality.” They are degraded to the status of mere consumers.

Berry advances this argument.  Consumers are no better than well-treated prisoners, and the American economy of industrial tools is designed entirely around the project of reducing autonomous tool users into pathetic, imprisoned consumers.  The essential characteristic of their imprisonment is a loss of what we have been calling, according to Illich’s categories, conviviality.

The industrial age has given us many tools, says Berry, “but little satisfaction, little sense of the sufficiency of anything.”  This is because the primary product of industrial tools is dissatisfaction and discontent.  Perversely, this is by design, for only in dissatisfaction can the user be imprisoned in the status of consumer, always ready to snap up the next thing, helpless to do for himself.

Berry, like any humanist worth the title, resists vehemently the commodification of all things by an industrial economy and through industrial tools.  But importantly, his resistance is founded primarily on a defense of human freedom.

[D]espite their he-man pretensions and their captivations by masculine heroes of sports, war, and the Old West, most men are now entirely accustomed to obeying and currying the favor of their bosses.  Because of this, of course, they hate their jobs—they mutter, ‘Thank God it’s Friday’ and ‘Pretty good for Monday’—but they do as they are told.  They are more compliant than most housewives have been.  Their characters combine feudal submissiveness with modern helplessness.  They have accepted almost without protest, and often with relief, their dispossession of any usable property and, with that, their loss of economic independence and their consequent subordination to bosses.  They have submitted to the destruction of the household economy and thus of the household, to the loss of home employment and self-employment, to the disintegration of their families and communities, to the desecration and pillage of their country, and they have continued abjectly to believe, obey, and vote for the people who have most eagerly abetted this ruin and who have most profited from it.  These men, moreover, are helpless to do anything for themselves or anyone else without money, and so for money they do whatever they are told.

What an indictment!  What a picture of servitude and in fact, slavery to the industrial model by and through the use of industrial tools which dispossess and render helpless!  Far from being an effete discussion of aesthetics (which is what the bosses and other boosters of industrial serfdom would have all the macho-pretenders believe—the better to keep them doing as they are told), Berry knows that a society’s use of tools is foundational to its freedom or lack thereof.

Berry writes that these prisoners of industrial tools know “that their ability to be useful is precisely defined by their willingness to be somebody else’s tool.”  This sentence is the guts of Berry’s criticism of industrial technology.  The desire to be useful—Berry’s first answer to the central question of what people are for—is turned from a human virtue to a weapon.  A weapon that feeds off of helplessness to strip mine the most valuable human resource—human liberty.  Best, it is not taken by force of whip and chain but surrendered under a perverse form of voluntary extraction.

Notice especially the particular form that this voluntary surrender takes—a “willingness to be somebody else’s tool.”  The true end of industrial tools—the telos­ of an industrial tool—is not usefulness, it is not getting the job done, it is not even ease and speed and the “freeing” of leisure time in order that people may “escape” the drudgery of handiwork or “save” their “labor.”  Instead, in a reversal of language and meaning worthy of Orwell, these tools have as their primary function the essential reduction of human beings to tools themselves for the magnification of the bosses.  Such perversity and insult!  Should the masses ever grasp this fact there will be violence in the streets.

It is a fair characterization of Berry to say that he is of the view that no sooner did man step out of the saddle and trade his horse for a tractor than he himself was saddled and put to the spur.  First they come for the horses, and the next thing you know the bit is in your mouth.  It is an apt and chilling metaphor.

On the other hand, the tools that amplify man’s essential freedom are those that make him sufficient to his work, able to enjoy the produce of that work, and dependent on no one further away than the local repairman in a pinch.  The “central figure” of an economy based on convivial tools “has invariably been the small owner or small-holder who maintains a significant measure of economic self-determination.”  “A mind so placed meets again and again the necessity for work to be good.”  This convivial impulse “is less interested in abstract quantities than in particular qualities.  It feels threatened and sickened when it hears people and creatures and places spoken of as labor, management, capital, and raw material.  It is not at all impressed by the industrial legendary of gross national products.”

Instead, says Berry, the convivial mind is “forever fascinated … by questions leading toward the accomplishment of good work.”  Berry folds his categories into one another in layer after layer, utility fructifies in beauty, beauty in usefulness, both in freedom and self-sufficiency, and all in resistance to subservience; to becoming a tool in service to the machine.  A technology of wholeness is the only answer to the technologies of dispossession and dismemberment.  Tools can magnify people in their essential humanness or people can be tools.  …

Utility and self-sufficiency both naturally create and are naturally buttressed by the third condition which people are for, and that is membership, the final condition and resting place of wholeness.  Industrial tools set apart while convivial ones bind together.  Nowhere can this be more clearly understood that in the field most often lauded by Futurists—medical technology.

Berry’s short story “Fidelity” tells the simple story of Burley Coulter, eighty-two years old and a lifetime citizen of the Port William membership, and his son Danny Branch, of the same membership.  Burley is dying, and his family and friends, in the struggle of their love and grief, submit his care to the “medical community.”  “Loving him, wanting to help him, they had given him over to ‘the best of modern medical care’—which meant, as they now saw, that they had abandoned him.”

Now Burley lies comatose yet “treated,” “lying lack and still in the mechanical room, in the merciless light, with a tube in his nose and a tube needled into his arm and a tube draining his bladder into a plastic bag that hung beneath the bed … he breathed with the help of a machine.”   Realizing their mistake, Danny kidnaps Burley one night while the rest of the membership cover his tracks in the face of the investigation that ensues.

Danny tenderly cares for his dying father as he takes him out of that place of tubes and machines to Burley’s favorite haunts among the fields and trees.  “Listen,” says Danny to Burley, “I’m going to take you home.”  Meanwhile, Wheeler and Henry Catlett, counselors at law of the Port William membership, stall the police.  “I’m just doing my duty,” says the Officer.  Henry replies, “And you’re here now to tell us that a person who is sick and unconscious, or even a person who is conscious and well, is ultimately the property of the medical industry and the government.  Aren’t you?  … Some of us think people belong to each other and to God.”

As Burley slips away Danny gives him a few, last sips of water as Burley briefly regains consciousness.  Danny digs a grave and in the morning, after the passing, gently lays one of the membership down in the furrow he has made.  Danny “let the quiet reassemble itself around him, the quiet of the place now one with that of the old body sleeping in its grave.  Into that great quiet he said aloud, ‘Be with him, as he has been with us.’  And then he began to fill the grave.”  Be with him as he has been with us.  Membership means being with.

The Lawman has moved on to confront Wheeler now.  “All I know is that the law has been broken, and I’m here to serve the law,” he says.  “But my dear boy, you don’t eat or drink the law, or sit in the shade of it or warm yourself by it, or wear it, or have your being in it.  The law exists only to serve.”  “Serve what?” asks the Officer.  Wheeler says, and we know he speaks for Berry, “Why, all the many things that are above it.  Love.”

Is this some strange apologetic for assisted suicide?  Of course, the question itself is rotten, and Berry won’t even admit it to be asked.  To ask is to function from the perspective of the Lawman and the Medical Care Providers and the industrial mind which have forged a culture of dismemberment from the fires of mechanism and instrumentalism.  This mind starts with the notion that every person is their own possession: “It’s my life, my body, my self.”  Berry says, no person is his own—that is not what people are for—people are for membership, and every decision and every tool must account for that belonging.

In societies confused by the technological prowess that enables us to transgress all traditional boundaries of coming to life and dying, the new discipline of big-ethics has emerged to mediate between pop-science and law. It has sought to create the semblance of a moral discourse that roots personhood in the “scientific ability” of bioethicists to determine who is a person and who is not through qualitative evaluation of the fetish, “a life.” What I fear is that the abstract, secular notion of “a life” will be sacralized, thereby making it possible that this spectral entity will progressively replace the notion of a “person” in which the humanism of Western individualism is anchored. “A life” is amenable to management, to improvement and to evaluation in a way which is unthinkable when we speak of “a person.” The transmogrification of a person into “a life” is a lethal operation, as dangerous as reaching out for the tree of life in the time of Adam and Eve.

The medical, legal, political, scientific, and in fact entire industrial apparatus, are invasive in ways that buttress the total power of the machine based on a grossly dismembered conception of what constitutes the good life; or, a good life, as the case may be.  Berry’s loyalties and loves are clear—to the membership rather than to the machine.  Just so.