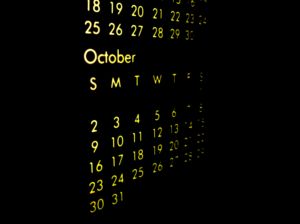 “When a nation’s Holy-days are treated with indifference and neglect, it should be considered a sign of national degeneracy and decay.”

Burned-Over District, NY. When tradition faces off against the almighty buck, smart gamblers put their money on the money. Consider the Uniform Holiday Act of 1968, under which Congress decided that George Washington’s face on the dollar bill trumps George Washington’s birthday. The act provided that beginning in 1971, Memorial Day, Columbus Day, Veterans Day, and Washington’s Birthday (later demoted to the beloved “Presidents’ Day”) were to fall only on happy Mondays.

For years, Florida Senator George A. Smathers, the smarmy playboy best known as JFK’s sidekick in the pursuit of venereal happiness, had been the Braveheart of the three-day weekend. The eminently practical Smathers even wanted to junk Thanksgiving Thursday and bid bye-bye to the Fourth of July.

The Monday holiday bill found its weightiest ally in the U.S. Chamber of Commerce. The chamber’s arguments for uprooting the old holidays were no more elevated than the bottom line:

When the bill came to the House floor in May 1968, shrewd supporters had tacked on a provision establishing Columbus Day as a national holiday. This ensured the measure’s passage, despite the futile efforts of Rep. Edward Derwinski (R-IL) to rename Columbus Day “Discoverers of America Day” as a way to honor Polish explorer Jan z Kolna and “put an end to the Polish jokes which have swept the country.” (Lech Walesa eventually did that.)

The Daughters of the American Revolution “vigorously protest[ed] this downgrading of our national heroes,” but the white-haired bluebloods were no match for Chamber of Commerce greenbacks. Neither was the ramshackle Lord’s Day Alliance, whose director complained, “Most ministers like long holidays about as much as they do the devil. The choir, ushers, Sunday School teachers, and the whole congregation join the mass exodus.”

Congressman Robert McClory (R-IL), who co-managed the bill on the floor, gamely conjectured that families would spend the long weekends visiting Arlington National Cemetery, Gettysburg, and other “famed battlegrounds and monuments,” including, presumably, the Tomb of the Unknown Shopper.

New York Democrat Samuel Stratton, self-proclaimed “father of the Monday-holiday legislation” (but no friend to the Father of our Country), declared that three-day weekends would “refresh and restore the spirits and the energies” of federal employees.

The bill’s cantankerous opponents were not impressed. Michigan Republican Edward Hutchinson called it “a rejection of our historic past”; North Carolina Democrat Basil Whitener grumbled that “a few business organizations would make more profit on Mondays” at the expense of “the tradition and background of our Nation…Let us not peg everything to the dollar.”

The traditionalists had a monopoly on wit, but then don’t they always? Fletcher Thompson (R-GA) offered an amendment to rename our holidays “Uniform Holiday No. 1, Uniform Holiday No. 2,” etc. The immortal skinflint H.R. Gross (R-IA), who had opposed spending money to keep lit the eternal flame over JFK’s grave, proposed to move Christmas and New Year’s Day to Monday. The Mondaynes were not amused.

The Uniform Holiday Act of 1968 passed the House, 212-83, and the Senate by voice vote, without debate. “This is the greatest thing that has happened to the travel industry since the invention of the automobile,” rejoiced the president of the National Association of Travel Organizations.

Rep. Dan Kuykendall (R-TN) saw it differently: “If we do this, 10 years from now our schoolchildren will not know what February 22 means. They will not know or care when George Washington was born. They will know that in the middle of February they will have a 3-day weekend for some reason. That day will come.”

(An earlier version of this essay appeared in the extinct American Enterprise.)

The Loss of a Culture of Personhood and the End of...