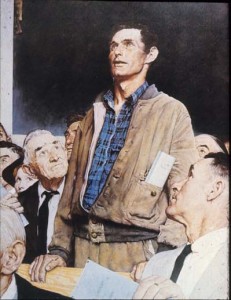 A great post over at the League of Ordinary Gentlemen by “Will.”  Beyond his reliance on a clearly excellent source (ahem), I strongly endorse his closing reflection:

Given the inter-connectedness of subsidies and local communities and the inherent advantages of large-scale producers and retailers in any economic context, I think that the localism versus globalism debate is about what we should subsidize rather than whether we should subsidize, period. I think we can (and should) argue over what local features are worth preserving through active government support. But suggesting that localism represents some return to an idealized free market state of nature strikes me as pretty naive. [my emphasis]

I think this is an issue that might cause some dissension on the Porch, between those who believe that an unfettered market necessarily leads to a concentration in power that inevitably requires imposition of limits by a suitably empowered government, and those who tend toward a kind of anarchic opposition to most any kind of governmental power. In my view, the problem is not simply that we currently have a powerful centralized government, but that its orientation is toward supporting BIGNESS in the form of private concentration of power (which in turn reinforces its public power).  While in theory it would be better to have neither public nor private concentrations of power, at this point in our history it is the public power that is at least theoretically more capable of responding to public demands, even a sustained public demand to restrict these sorts of concentrations of power.   That is, sustained demand could result in public efforts that would endeavor to restrain the concentration of private power toward the goal of preserving and defending a true and defensible form of local self-governance. Indeed, if a suitably oriented government were doing a good job at this, ultimately one wouldn’t need anything approaching the concentration of power in our central government.

For those who have called upon FPR to consider practical ways of applying its philosophy to the “real world,” I would submit that we must begin to think creatively about the current role that our central government might play not in continuing to support the expansion of private and public power alike, but fostering localism (and thereby restricting both concentrations of power). Given, this would seem to be going against its basic grain of the past 200+ years of expansion and concentration, but recent events suggest (to me) that we need a serious reconsideration of the basic purpose and ends of government. However, simple opposition to “Gummint” is, in my view, a romantic fantasy that simply plays into the hands of concentrations of private power.

I guess them’s fighting words, so let the rumble commence.

UPDATE:  I have moved this post from our “Briefly Noted” section to the main section of FPR, mainly because the ensuing comments confirm that this is a discussion of utmost – perhaps even supreme – importance.  At issue is whether it is believed that salutary change can be effected within the context of the existing system (thus, whether there are policies that could, over time, change the direction of our ocean liner), or whether (to extend the metaphor) we’re about to hit, or have already hit, the proverbial iceberg.   Most of the comments thus far reflect the latter view – indeed, largely paint a picture in which we are already taking on water.  I can’t say as I wholly disagree with this assessment, but I hold out some hope that there’s a sliver’s chance of articulating a different governing philosophy and changing course, albeit prudently, cautiously and with recognition of the pitfalls.  I’m grateful to a few thus far who have suggested interesting and innovative policy proposals that could, over time, change the complexion of the land (a tax on parking spaces – seems like a good idea to me!).  I invite other proposals, regardless of their prospect of enactment, in the exercise of simultaneous civic responsibility and civic rebellion.  I guess I’m not quite ready to subscribe to Caleb’s view that we should start to look something like Afghanistan.  Colonial New England maybe, but Afghanistan, not for me.

Redeeming Capitalism is an Uphill Battle