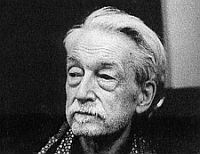 Devon, PA.  In the early pages of Jacques Maritain’s Art and Scholasticism, he provides a philosophy of art that restores “art,” in the sense of the fine arts, to its proper status as the particularly intellectual, singularly human, form of work.  Artists and artisans are one; and while all living creatures may work in some fashion, art, the making or reifying of an idea in matter, captures in a way no labor can the dignity proper to the embodied rational animal.  When the artisan makes something, he demonstrates the centrality of ideas to human life even as he affirms that ideas, for men, become most real when concretized: the fine arts honor the senses of our body just as the instrumental arts serve us in our bodily condition.  Thus, his treatise gives us an important definition of the fine arts in relation to work as craft — an always timely reminder for those engaged in the fine arts.  But he also provided the foundations for the rich anthropological and theological reflections on work and the dignity of man, which became central to Catholic social doctrine in the last century, as it sought to combat the dehumanizing “liberation” of Marxist labor theory.

In the latest installment (Part V) of my essay, Art and Beauty against the Politicized Aesthetic, I reflect on Maritain’s philosophy of art and work.  But this is one plank within an increasingly vast platform, and so you may enjoy reading the earlier installments.  The relevant passage in Part V runs:

If Maritain grants with qualifications the modern notion of art as autonomous and as having a self-absorbing and undeviating telos for the work made, he steers a more careful course between two other modern misconceptions. Above all, romantic and post-romantic aesthetics often reduce—or “elevate”—art to a kind of excretion, whether as the leaves on the trees or something more visceral. Conversely, in Maritain’s day, self-styled neo-classicists held up Racine as the model of art as an ornamental exercise of the reason, or wit (l’esprit), of perfect method devoid of subjective, emotional, or spiritual interest. Maritain, here and in all his aesthetic writings, suggests that art has rightly become autonomous because it has become self-conscious and spiritualized—and that the discovery of this truth belongs to the Romantics. While the end of the fine arts in beauty will speak to this most powerfully, in the early pages of his treatise he concerns himself primarily with establishing art as an intellectual rather than moral virtue. If it is eminently practical in having its end as a work made, artistic work is nonetheless “the properly human work, in contradistinction to the work of a beast or the work of a machine. . . . When work becomes inhuman or sub-human, because its artistic character is effaced and matter gains the upper hand over man, it is natural that civilization tends to communism and to a productivism forgetful of the true ends of the human being.”

The work that most befits man as a rational animal is the intellectual one of art, in which the idea impresses itself upon matter, subordinating if not dominating it. It is worth our pausing to note that one hears an anthropology of human dignity in work here that Maritain’s friend Yves Simon, the English artist Eric Gill, the Welsh poet David Jones, and Pope John Paul II—among many others—would subsequently develop. Art, even fine art, is a kind of work and not itself, as the romantics might have it, an effervescence of oracular inspiration. But rather than legitimizing art in an age given over to utilitarian and pragmatic—much less communistic materialist—concerns, Maritain seeks to demonstrate the dignity of artistic work as intellectual; in the art of logic, it even crosses over from the practical to the speculative and gets taken up into the contemplative life of the philosophers and theologians. He will elsewhere suggest that the fine arts similarly approximate to this super-elevation—that they, indeed, form an analogue to the super-elevation of prayer made possible by the Holy Spirit. As if expanding Joseph Pieper’s defense of leisure and contemplation in a world of “total work,” Maritain thus aligns art properly understood with a society ordered to dignified work, but also seeks to raise “true making” to the ranks of leisure and contemplation.

A Lost Job and a New Life