Patrick just posted that the great man himself was heard describing Michelle ma’ Belle’s kitchen garden as the “most important plot of land in America.”

Patrick tells me that in context, Berry was talking about how everyone should grow something on his property, and that as such, the White House garden was symbolically meaningful.

How very disappointing.  That “plot of land” on which sits the “people’s house” is the antithesis of virtually everything Mr. Berry stands for, or has stood for.  Though it pains me greatly to say, Mr. Berry, you been snookered, bamboozled, razzle-dazzled, flim-flammed, chickidee-chanooked, snozzled, slam-damn-zlled, snizzle-wizzled … or whatever folk neologism they use in the backwoods of the Kentucky River watershed near Lane’s Landing.  Surely, Mr. Berry, you and your neighbors have some long practiced folk remedies (perhaps involving the days pluckings) for peddlars of crackling lies posturing as home spun remedies?

I’m afraid Mr. Berry’s belief that the Obama garden is meaningful is akin to saying that the symbolism of GWB hauling brush on his ranch for a photo op was meaningful. 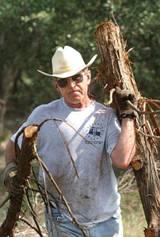 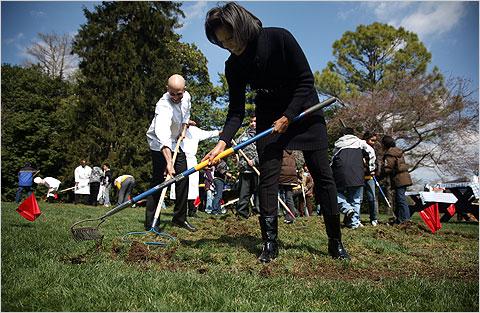 At least GWB was man enough to pick up the log and not send his wife out to do the dirty work!  And at least he knows enough to put on some work clothes, and gloves!  Yeah, I can see my wife working our garden in that outfit.

Patrick further informs me that at minute 24 here, the great man says that the Obama garden “offers a kind of permission from the First Family to other families to look upon their dooryards as possibly productive of food.”

The very notion of needing such “permission” from the first family, or of even deigning to allow such servile talk to creep into our political discourse, is so absolutely repellant to me that I will just have to go on loving Berry despite his obvious failure to cope with the function and degradations of national politics.

Luke Sheahan on The University Bookman and Academic Freedom