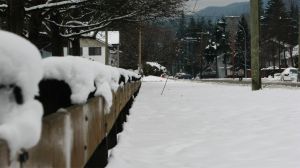 Editor’s note: This piece, by a well-known professor in the Netherlands, originally appeared in the Dutch daily newspaper Trouw (January 2, 2010). The Front Porch Republic article that Kennedy references is also soon to appear in the well-known Polish conservative magazine Fronda.

Amersfoort, The Netherlands. In the last few weeks, when our streets and sidewalks were dusted with snow, I sprang up with snow shovel in hand, and went outside to clear the sidewalk. I was ready to go; for many years, the snow shovel that I had imported from Michigan had sat unemployed in the shed. And since the little parcel of pavement before my house is nothing compared to the sixty-five foot driveway that I had to keep tidy in Michigan, I also took care of the next door neighbors’ sidewalks.

But I quickly realized that my neighborhood dealt with snow on the sidewalks differently than the inhabitants of Michigan, where nearly 100 inches of snow fall per year. Michiganians are required to free their sidewalks of snow and ice the day that the snow falls. It turns out that, here in Amersfoort, I am one of the few who took the effort to clear the sidewalk. Within a few days, the sidewalks of my neighborhood turned into a slippery sheet of ice, rendering them impassable.

I understand that there could be all kinds of reasons why the Dutch did not line up immediately with shovels in hand. First of all because many of them probably do not have snow shovels, and it takes some time and effort to clean snow from a sidewalk with a broom. Perhaps they, like my wife and children, first wanted to go sledding on the white sidewalks. Maybe they were so impressed with the unspoiled beauty of the snow, in an age when people are so worried about global warming, that they wanted to cherish it. Perhaps they assumed that the snow would quickly melt, or that city hall would do it. Or was it simply that in the last few decades so little snow has fallen here that the younger generation has never learned to keep sidewalks clear?

I tend to think that slippery sidewalks are a sign of a broader pattern, in which people are less prepared to take responsibility for the inconvenience of ‘gray areas’, such as sidewalks. Is the sidewalk an extension of my property or does it belong to the municipality? Whose responsibility is it to keep it clean? In the more modest neighborhoods in my area, I noted that the streets and sidewalks were often swept, I suspect by the very same people who sweep them in summer and fall (something I admittedly seldom do). But overall, both the citizens and my municipality of Amersfoort, failed massively. The municipality did not clean the sidewalks, the pedestrian walkway in the shopping district was an ice-skating rink, and not one single plow drove down our street. But the fault also lay with the citizens of Amersvoort, who apparently are not aware that passersby could fall on their sidewalks, or could be forced by their negligence to share the streets with bicyclists and cars.

Recently, in the online magazine Front Porch Republic, Jonathan David Price related his experiences in Amsterdam. He waited for a streetcar to arrive at its stop along with other passengers. The streetcar stood motionless just a few feet away, because a broken umbrella lay on the rails. No one felt responsible to pick the umbrella up: neither the tram driver nor the passengers nor the onlookers. Finally, Price stepped off the tram stop to remove the umbrella from the rails.

Who takes responsibility in these gray areas? Many Dutch do (more than) their bit to keep semi-public spaces clean. But most do not. And the extent that citizens are willing to take responsibility in these gray zones is an indicator of the health of their society.  It is a rough indication how much people are willing to commit themselves to each other and to society. “I’m not doing it, because it’s not my responsibility,” is not a good attitude to start a new year.

I’ve made a New Year’s resolution: to keep my sidewalk tidy. That means getting to work straight away, as my street is filled with the empty firework canisters from the Dutch New Year’s celebration.

James Kennedy is Professor of the history of the Netherlands at the University of Amsterdam.

This piece was translated into English by Jonathan David Price.