Would America be more governable, if our states weren’t quite so unrepresentative of the people who lived there?

So suppose you find yourself accepting the possibility that within the United States today a discursive space wherein people can truly meet, argue, listen persuade, change their minds, make plans, and otherwise govern themselves democratically can no longer be reasonably expected to emerge. In other words, that republican government is at an end. One possibility would be to wash your hands of the whole thing. Another possibility would be to look at whether there is something in the structure of our 300 million-plus country which makes even the bare elements of democratic republican–that is, representative government–practice harder and harder all the time. (Of course, at a localist site like this one, that’s not a new question, but bear with me.)

One obviously place to begin would be with the Senate, which has become progressively less democratic and more difficult to get legislation through as the decades have gone by. But beyond some procedural reforms regarding the filibuster, isn’t there something more that could be done to make the states more likely sites for real democracy, whether locally or on the national level. That might require something dramatic. Not as dramatic as abolishing the Senate; I like federalism, and I like states having power on the national level. (Fact is, it’s the 17th Amendment which I’d like to see abolished.) But what if the states the Senate represented were themselves a little more “democratically” organized? Like, say, this? 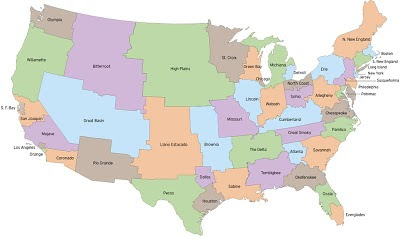 It’s a thought experiment, designed around the idea of creating fifty states, all with essentially equal population. (Find out more about it here, here, and here.) Of course, states will never be–or at least, probably never should be–redrawn solely on the basis of population for electoral purposes, even democratic ones; there is history, culture, geography and more to consider. Still, such reconsiderations go along with my oft-stated wish that we could have more states–more locations for people to center themselves around, identify themselves with, and develop as a culture, a community, a demos capable of listening to, learning from, and even sometimes agreeing with one another. It’s worth imagining, at least.

A Book to Guide the Church: The 1662 Book of Common Prayer, International Edition