Front Porch Republic
Home Articles Culture, High & Low Building Something of Our Own 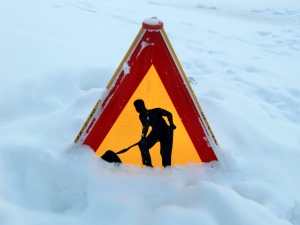 Claremont, CA. In a recent episode of “Mad Men,” the lead character Don Draper finds out that his advertising agency is about to be sold, turned over from one conglomerate to a larger conglomerate.

He pleads with his colleagues to help him buy their company back, to rescue it from becoming shuffled around in a corporate shell game. “I want to build something of my own,” he says. “How do you not understand that?”

It may be the great sentiment of this American moment: “I want to build something of my own. How do you not understand that?”

Pretty much anywhere you look these days, you can find expressions of that sentiment, like in the very popular, very excellent, and now Oscar-nominated film “Up in the Air.” In that film, George Clooney plays a “termination engineer” named Ryan Bingham whose job it is to fly around the country and fire people. Bingham is a likeable but aloof guy, who speaks with unrestrained passion only once: when he is standing outside Lambert Airport in St. Louis. There, he rhapsodizes to a younger colleague about the “Spirit of Saint Louis,” the era when middle America stood for the construction of big things, great things, tangible things.

It’s a stark contrast to the middle America that Clooney’s character inhabits, a middle America where little is being built but much is being downsized, where “productivity” rarely signals the production of a material item, and where “streamlining” doesn’t mean that you’re designing a jet but firing your colleague. The new spirit of Saint Louis, it seems, is the spirit of demolition.

Although it’s tempting to see “Up in the Air” as a story of Ryan Bingham’s search for meaningful romance, since much of the movie focuses on his affair with another mobile executive (played excellently, I should say, by my high-school classmate Vera Farmiga), it’s more a story of his search for meaningful work. Bingham wants to build something, too, in a nation where nobody seems to be building anything anymore. He, too, wants to see some evidence of his own work – thus his obsession with accumulating frequent-flyer miles, which in this economy are the only material proof of his professional achievement.

But Bingham’s larger prospects seem bleak, just as bleak as the prospects of the characters in “The Office” working for the Dunder-Mifflin Paper Company (unofficial motto: “limitless paper in a paperless world.”) The only thing standing between those employees and termination is the hapless but heartfelt leadership of Scranton branch manager Michael Scott. Scott really wants to build something, too: a people-friendly, team-spirited company that gives its clients something tangible that they need. Part of the joy of watching “The Office” has been the unlikely story of Scott’s various triumphs over a corporate office that want to close branches, make cuts, and fire employees. It’s fun to engage in the fantasy that a guy like Scott, a guy who persists in building things up rather than trimming them to size, could last in the present corporate environment. But in the last few weeks, Dunder-Mifflin has been visited by investment bankers, and it’s not clear how much longer Scott can live off his dreams.

This palpable cultural desire, this yearning to build something, isn’t just a middle-America or red-America thing. It’s an all-America thing. In fact, for me the sentiment of this American moment was captured perfectly a couple of weeks ago, at a party on Venice Beach. Now, Venice, on the surface, seems to be about as far as you can get from middle America, culturally speaking; this is a place where most political activism revolves around the slogan “Keep Venice Weird,” and where the air will make you high if you breathe it for more than 47 seconds. But under the surface, it’s much the same as Scranton. In what began as a generic conversation about jobs, one guy said, “You know, I really wish I could work for a living.”

Someone consoled him about the horrors of unemployment – but he quickly explained that he has a perfectly lucrative job, doing something that involves computers.

“The thing is that I hustle for a living,” he said. “Everyone around here hustles for a living, and I just wish I had a job doing real work.” He paused. “When I was a kid, people really worked for a living.” A lot of people nodded.

This kind of yearning – “I want to build something of my own. How do you not understand that?” – is what made Matt Crawford’s Shop Class as Soulcraft a bestseller last year. It’s what has made hobbyists across the country adopt political language to describe what they do; members of the DIY (Do-It-Yourself) Movement or “new craft movement” alternately knit and preach about a counterculture.

It’s what has made a lot of Democrats wish there was a little more New Deal-i-ness in the Obama Presidency; if FDR knew anything, he knew what it means to people to be able to build something with their own hands. He knew how much it means to people when you can give them tangible proof through work that they are part of helping to build a better nation and world.

This kind of yearning has also helped to fuel the Tea Party Movement, since whatever else one might say about them, the tea partiers’ appeals to the idea of private ownership resonate with a public that is increasingly desperate to build something of its own.

Of course, what the tea party folks miss – about the nation and about themselves – is that the contemporary American yearning isn’t just a yearning for atomized or privatized independence. All of the characters I have mentioned, all of whom articulate this powerful cultural desire – Don Draper, Ryan Bingham, Michael Scott – are not characters dreaming just of self-reliance. They dream, rather, of a kind of togetherness. They are all lonely characters, haunted by visions of a time when men and women worked together with a sense of common purpose, interested in making something more than just money.

In fact, one of the great ironies of the tea party movement is that people are showing up at all its rallies because they want to be a part of something bigger and meaningful.

The paradox of the tea party movement is that even as it rails in theory against the idea of big institutions, it is thriving in practice because it is a big institution, one which provides a sense of national community and shared purpose. The tea partiers are excited to be building something together. (As Tocqueville would say, they fail to do themselves justice; they are better than what they take to be their philosophy.)

It’s telling that a number of prominent tea partiers have, contra the Republican Party, come out against the Supreme Court ruling in Citizens United. It’s an odd position for tea partiers to take – since they ostensibly seek the further freeing of markets – but one that reveals a grand incoherence within that movement. More particularly, it reveals the fact that the Tea Party is filled with folks who are in fact dubious about the machinations of markets, markets that trade on buying and selling rather than building.

They are not alone. It is the refrain of our time: “I want to build something of my own. How do you not understand that?” The lines hang in the air, waiting for a response, or just recognition.