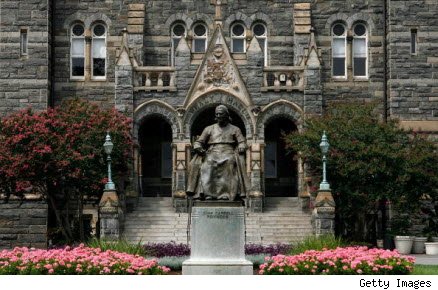 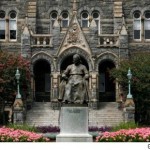 Phillip Blond has begun his “American tour” with a lecture this evening at Georgetown University. While the Georgetown men’s basketball team flopped, Blond soared. In attendance tonight were “Porchers” Mark Mitchell, Rachel Blum and yours truly, along with such eminences as Rod Dreher, Ross Douthat and John Millbank. With perfect timing, a column by David Brooks about Blond appears in today’s New York Times. At the risk of copyright infringement, I quote it in its entirety here:

The United States is becoming a broken society. The public has contempt for the political class. Public debt is piling up at an astonishing and unrelenting pace. Middle-class wages have lagged. Unemployment will remain high. It will take years to fully recover from the financial crisis.

This confluence of crises has produced a surge in vehement libertarianism. People are disgusted with Washington. The Tea Party movement rallies against big government, big business and the ruling class in general. Even beyond their ranks, there is a corrosive cynicism about public action.

But there is another way to respond to these problems that is more communitarian and less libertarian. This alternative has been explored most fully by the British writer Phillip Blond.

He grew up in working-class Liverpool. “I lived in the city when it was being eviscerated,” he told The New Statesman. “It was a beautiful city, one of the few in Britain to have a genuinely indigenous culture. And that whole way of life was destroyed.” Industry died. Political power was centralized in London.

Then there was the market revolution from the right. In the age of deregulation, giant chains like Wal-Mart decimated local shop owners. Global financial markets took over small banks, so that the local knowledge of a town banker was replaced by a manic herd of traders thousands of miles away. Unions withered.

The two revolutions talked the language of individual freedom, but they perversely ended up creating greater centralization. They created an atomized, segmented society and then the state had to come in and attempt to repair the damage.

The free-market revolution didn’t create the pluralistic decentralized economy. It created a centralized financial monoculture, which requires a gigantic government to audit its activities. The effort to liberate individuals from repressive social constraints didn’t produce a flowering of freedom; it weakened families, increased out-of-wedlock births and turned neighbors into strangers. In Britain, you get a country with rising crime, and, as a result, four million security cameras.

In a much-discussed essay in Prospect magazine in February 2009, Blond wrote, “Look at the society we have become: We are a bi-polar nation, a bureaucratic, centralised state that presides dysfunctionally over an increasingly fragmented, disempowered and isolated citizenry.” In a separate essay, he added, “The welfare state and the market state are now two defunct and mutually supporting failures.”

The task today, he argued in a recent speech, is to revive the sector that the two revolutions have mutually decimated: “The project of radical transformative conservatism is nothing less than the restoration and creation of human association, and the elevation of society and the people who form it to their proper central and sovereign station.”

Economically, Blond lays out three big areas of reform: remoralize the market, relocalize the economy and recapitalize the poor. This would mean passing zoning legislation to give small shopkeepers a shot against the retail giants, reducing barriers to entry for new businesses, revitalizing local banks, encouraging employee share ownership, setting up local capital funds so community associations could invest in local enterprises, rewarding savings, cutting regulations that socialize risk and privatize profit, and reducing the subsidies that flow from big government and big business.

To create a civil state, Blond would reduce the power of senior government officials and widen the discretion of front-line civil servants, the people actually working in neighborhoods. He would decentralize power, giving more budget authority to the smallest units of government. He would funnel more services through charities. He would increase investments in infrastructure, so that more places could be vibrant economic hubs. He would rebuild the “village college” so that universities would be more intertwined with the towns around them.

Essentially, Blond would take a political culture that has been oriented around individual choice and replace it with one oriented around relationships and associations. His ideas have made a big splash in Britain over the past year. His think tank, ResPublica, is influential with the Conservative Party. His book, “Red Tory,” is coming out soon. He’s on a small U.S. speaking tour, appearing at Georgetown’s Tocqueville Forum Friday and at Villanova on Monday.

Britain is always going to be more hospitable to communitarian politics than the more libertarian U.S. But people are social creatures here, too. American society has been atomized by the twin revolutions here, too. This country, too, needs a fresh political wind. America, too, is suffering a devastating crisis of authority. The only way to restore trust is from the local community on up.

An impressive audience turned out tonight, notable for its youth and evident hunger to find a different way. Both current party configurations have yet to get a clue. The question that was posed several times, and which needs serious consideration, is whether and how Blond’s “Red Tory” analysis can be applied to the American situation. The diagnosis is surely spot on, but the remedies will likely need to be more local. The authors here, and our good readers, are likely to be the best sources of thoughtful answers to the question “what is to be done”?

For those in the DC area, Blond will be part of two panel discussions tomorrow on the Georgetown campus from 12-4 p.m. For more information, click here.