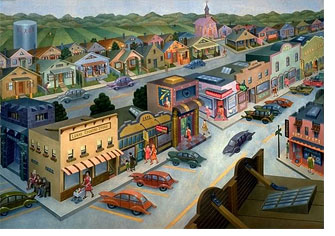 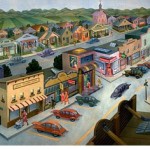 In the wake of Phillip Blond’s visit to Georgetown and the imminent passage of the Healthcare bill, we need to state clearly the nature of the moment: our time is defined by a pincer movement mutually arising from, on the one hand, liberalism’s tendency to understand the human creature in individualistic and monadic terms, and on the other, the rise of a centralized Nanny State. Our current political alignments regard these two as opposites, the one the philosophy of heroic Randian individuals, the other, the specter of the Nanny State – or (as described from another perspective), on one side, greedy industrial plunderers, and on the other, the Government as protector of and provider for the people. The pincer movement is directed against all intermediary and binding associations: both the Market and the State seek to be monopolistic in their spheres, disempowering or dislocating intermediary identifications. Community, family, church, society – all are to be remade in the voluntarist image, and their functions are to be replaced by the State.

In the wake of Phillip Blond’s visit, there can and will be much debate about many aspects of his policies and positions, but I think his main point – identifying the unholy alliance between economic individualism and State collectivism – was powerful and undeniable. While he cited the work of Chesterton and Belloc, he might too have invoked the name of Robert Nisbet as well. And, perhaps above all, his analysis echoed the insights of Tocqueville in his masterpiece Democracy in America.

Many readers of Democracy in America – and doubtless more with only passing acquaintance – know that Tocqueville warns against the rise of a centralized, bureaucratic, “tutelary” government, the “soft despotism” of the centralized Nanny State. It is these passages of Tocqueville that have always been the most admired by conservatives. But most readers fail to see that Tocqueville understood the rise of the centralized tutelary State not to be result of a coup by centralizing despots, but rather, the consequence of our ever-greater tendency to embrace a Lockean form of individualism. Throughout Democracy in America he wrote of the ways in which associational life strengthen citizens, giving them the tools and capacities and talents for finding together the means of achieving the particular good within their communities, and providing for them a familiarity with, and love for, civic freedom. The tendency for democracies, over time, toward separation, solipsism, individualism – suspicious of groups and people that make claims upon individuals, more tempted by private than public concerns, increasingly understanding freedom to be doing as one wants – renders democratic people ripe for the rise of the tutelary State.

Tocqueville over and over describes such people as “weak,” shorn of the resources that provide an avenue toward a true form of freedom. And so, he writes toward the conclusion of Democracy in America that the individual freedom claiming to do what we want will lead to the most debased form of modern tyranny, willing subjects to a tutelary State. Tocqueville writes, with acute insight:

Since … no one is obliged to lend his force to those like him and no one has the right to expect great support from those like him, each is at once independent and weak. These two states – which must neither be viewed separately nor confused – give the citizen of democracies very contrary instincts. His independence fills him with confidence and pride among his equals, and his debility makes him feel, from time to time, the need of the outside help that he cannot expect from any of them, since they are all impotent and cold. In this extremity, he naturally turns his regard to the immense being [the tutelary, bureaucratic, centralized State] that rises alone in the midst of universal debasement. His needs and above all his desires constantly lead him back toward it, and in the end he views it as the unique and necessary support for his individual weakness.” (II.iv.3)

Tocqueville’s analysis provides us with a unique understanding of the sources of modern centralization and the rise of the administrative State. Often we tend to view its rise as the result of a collectivist spirit, and assert in its opposition a hale defense of individualism. Tocqueville’s analysis suggests that those concerned with the rise of the tutelary State should not defend individualism as such – but instead, defend associational life and the spirit of self-government that it engenders. The spirit of liberty that impels individuals toward the liberation born of freedom from obligations and responsibility finally makes us servile dependents upon the State.

In perfect confirmation of Tocqueville’s fears, take a minute to watch this video, courtesy of the U.S. Government in its efforts to promote the Census:

The commercial – entitled “A March to the Mailbox” – portrays an ordinary Joe getting off his couch (in a bathrobe) and marching out of his house – picket-fenced – where suddenly the streets fill with neighbors and friends, the names of whom he knows entirely. He states that by filling out the Census form, he’s helping Pete’s school and roads for his neighbors car pool and Risa’s health-care and so that – I quote – “we can get our fair share of Federal Funding.” As I watched it (in growing horror), I saw it as the perverse fulfillment of Tocqueville’s analysis – that the very community spirit being portrayed in that commercial would itself obviate the need for that sort of ad. The ad portrayed a vibrant community of people who know each other and genuinely wish each other’s good, but in fact the need for the commercial at all was born of the widespread absence of any such reality. Rather, the reality is that each person is to fill out this form in the privacy of his own home in order to be relieved of the obligation to do anything further to help fellow citizens who are increasingly unknown to him. Having won the Cold War, our government is now producing and airing commercials that portray what can’t be described in any other way other than our very own Potemkin village – community for show in a nation of strangers, bound only by our common subjection to the State.