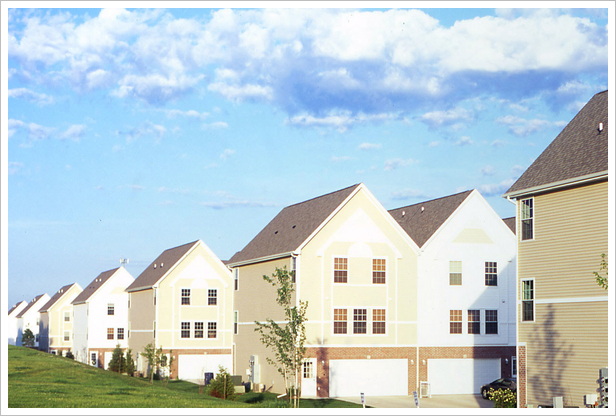 There’s an increasing tendency on the right to skip over technical discussion and real knowledge in order offer to offer a broad cultural “analysis” that simply calls one side “American” and the other side “anti-American.” James Poulos’ recent defense of the suburbs doesn’t quite fall into this category, but it comes unpleasantly close. The first problem with the piece is its take on how suburbs are built:

Some suburbs are masterplanned, but many aren’t — and the ones that are masterplanned often encourage more ‘real community’ than those that have sprawled out at random, without any logic or purpose, from one vast development to the next.

The fact that many suburbs aren’t masterplanned hardly makes them “random.” Zoning regulations require separated uses and tightly prescribe plot sizes and setbacks. Habitat for Humanity, which understandably refused to build homes for cars when some people lack adequate housing, clashed in the past with neighborhoods that require attached two-car garages.

Suburban building patterns also receive vast external subsidies. As Donald Shoup points out invaluable book The High Cost of Free Parking, the price of the so-called “terminal capacity” for cars (otherwise known as parking spaces) is generally paid for not by motorists but by property owners who are required to provide free parking. The total subsidy to auto owners in 2002 was estimated to be between $135 billion and $386 billion, a whopping figure in a year in which we spent $349 billion in the defense budget. Note that  this subsidy, far from being unplanned, is usually legally mandated.

A common fantasy peddled by libertarians like Randal O’Toole is that the suburbs sprang forth from the American Id unplanned. But those sprawling developments are anything but random. The truly libertarian position would encourage a legal regime that gave freedom back to Americans to build in a denser, more random and less auto-dependent way, if and when they choose to do so.

But for Poulos this ultimately isn’t an argument about the liberty of Americans to build as they choose, it is (rightly) about culture:

I’m not sure what Poulos means here. The American ideal of home ownership shows a desire to homestead, to settle, not to move ever onward. I suspect what Poulos really means is that the suburbs enshrine an auto-based culture that allows commuters to fancy themselves white-collar Kerouacs while spending whole weeks of each year stuck in gridlock. That makes some sense. But if so-called post-modern conservatives want us to create massive economic inefficiencies, needlessly destroy local countrysides, and restrict the freedom of property owners in order to enshrine a particular way of life they consider especially American, they need to offer us more than a contestable, reductive, and, as some would put it, highly moralistic definition of the national character. They certainly shouldn’t claim that their opponents are the scolds.

Indeed, those who see some shortcoming in our suburbs have done much more than point to America’s cultural traditions of community life. They have pointed to a host of practical reasons — human,  economic, environmental — to loosen zoning regulations and allow (or even promote) denser building patterns and preserve the open countryside. Perhaps those are some of the reasons that persuaded David Brooks to be a bit more skeptical about the suburbs.