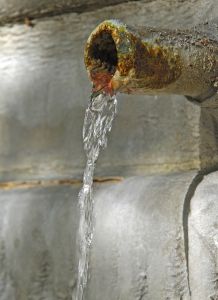 Fukashima, Japan. The questions surrounding water consumption are many, and complicated. We wonder how much water we should drink, whether it should be bottled or tap, filtered or unfiltered, chemically treated or untreated, imported or local. Perhaps there are ethical, social, or political considerations or externalities that must be considered.  This potential optimal strategy may even differ from person to person and place to place.

I began thinking about these questions a year and a half ago, after moving from downtown Fukushima City to my in-laws’ home in the Japanese countryside. My first two weeks in the house, I unconsciously guzzled tap water and suffered from silent dyspepsia before finally saying something to my wife.  “You have to use the filter,” she said.  “I’m sorry I forgot to tell you. We use well water here.”

Our house is at the base of a volcano next to a river.  Upriver are several rice fields, a vineyard, a grove of cherry trees, an apple orchard, peach farms, a Buddhist cave temple, and unadulterated nature all the way to Moniwa Dam on the border of Yamagata Prefecture.

Our water comes from a well tapped into the aquifer directly below us – a throwback to an age with minimal concerns about water safety in the valley.  No filter is used, nor does it go through a treatment facility. It’s merely honest water.  After Fukushima peaches became famous nationwide, the area around our house has transformed from an isolated hamlet to an every-expanding center for shipping produce to all corners of the Japanese archipelago.

By the time the river comes to our house, it is stagnant, brown, and full of garbage: PET bottles, plastic shopping bags, and hulking, empty washing machines.  My father-in-law’s eyes water when he tells me how he used to swim in that river, how it was clear and full of fish when he was growing up after the war.

Surely in a world of electron microscopy, published human genomes, correlative risk factors, tyrosine kinases, Moore’s Law, personal gene expression profiles, drug-store genetics, the Internet, advanced scientific safety regulations, and a robust public health sector, it would be possible to formulate an optimal strategy for water consumption.  But such an optimal strategy would vary so widely from individual to individual and place to place that the amount of data and processing power necessary for each person, for each place, the lack of effective alternatives, the lack of locally responsive political structures, known unknowns, unknown unknowns, and correspondingly high error rates make such a system impractical.

The near-constant mobility of modern actors would add another order of complexity: my theoretical optimal strategy now in Japan would be completely different from my theoretical optimal strategy in the United States.  Sorting out the ripples of mistakes made honestly or dishonestly would formidably increase the error rates of such calculations.  In short, we can imagine how we might create personalized optimal strategies for water consumption as a public health measure, but this seems utopian. Even so, this is the task that we must face if we continue with the status quo.

Japan, one of the most densely populated countries in the world, has an unfortunate history of pollution and environmental disease.  One problem that persists to this day is an incredibly high rate of stomach cancer, caused by the contamination of water supplies with the pylori bacterium. Although news reports suggest pylori is no longer a problem or that high rates of Japanese stomach cancer come from an increasingly Western diet, over half the population continues to test positive for pylori.  On Japanese television, there are occasional variety shows where celebrities are tested for pylori, and the audience is then subjected to a commercial break before the cliffhanger results.

While pylori has been discovered and the appropriate public health measures are being enacted, there is an even more potentially invidious medical problem associated with drinking tap water: the contamination with heavy metals, which make you go quietly and undetectably insane.  As we humans stir up dust and unlock the hidden poison deposits of eons past, we increase the chances that heavy metals get into the water supply.

Since the symptoms of heavy metals poisoning are the same as those of dementia, about which we know very little, the two are often confused, and we conflate a disease with its singular source as pollution with the natural progression of old age.  To put it mildly, drinking straight from the tap in many places carries some unnecessary risks, some of which cannot be mitigated by boiling or by simply trusting an inherently unreliable filter.

The alternative of bottled water is both bad for the environment and associated with higher rates of cancer.   Indeed, a veritable cocktail of carcinogens and other harmful chemicals are found in bottled water: trihalomethanes are linked to bladder cancer; haloacetic acids are linked to cancer in rodents and developmental problems in whole embryo cell culture; various components of plastic, radioactivity, arsenic, boron, and other harmful chemicals are all found in bottled water.

And even though the concentrations of these various chemicals are often well above the bottled water industry’s own standards, the industry is self-regulating. These standards are set by self-interested corporations; determined by assigning an economic cost to pollutants. No calculation of human cost is involved. These standards are designed only to avoid lawsuits and regulation.  This all means that the concentration of harmful chemicals in bottled water is several times higher than truly safe levels.  Essentially, bottled water is nothing more than dressed-up and marketed tap water plus a hefty economic and environmental price tag.

Of course, we must drink water, and if we must choose between tap water likely to make us go insane and bottled water likely to give us cancer, I’m tempted to uncynically hope for cancer.  By the time I make it to old age, in all likelihood, life expectancy will be 92 or 93 years old – mostly because we will have made great strides in fighting the number one and two killers of humans: heart disease and cancer.  Heavy metals poisoning will likely remain both difficult to detect and difficult to treat.  Still, I’d rather sacrifice my body to keep my mind.

Water consumption seems to be a damned if you do, damned if you don’t situation.  What else can we do besides hope for miraculous scientific advances, try to minimize chronic exposure to individual toxins by varying the type of water consumed, or simply eat, drink, and be merry?

It seems the amount of information required to formulate an optimal strategy for water consumption is breathtaking.  Assuming wide variances accounting for individual risk factors and geographical variance makes formulating an optimal strategy even more difficult.  But there are some potential shortcuts.

As Jean-Jacques Rousseau observed, individuals can either “hunt hare” by themselves or “hunt stag” as a group.  Hunting stag requires a level of trust and cooperation, but has a far better payoff for success.  For this reason, in our early evolution, groups of humans who cooperated in “hunting stag” were better off than solitary humans who “hunted hare”; groups that cooperated well out-competed groups that cooperated poorly, thus, humans cooperate naturally.

From hunting stag to the management of a clean water supply, cooperation is in our genes.  It’s natural to leave the management of resources to those who have a vested interest in them, whether these resources are forests or votes.  This is why Federalism works, and cold bureaucrats imposing order from a distant capital doesn’t.  And this is also why no centralized optimal strategy approach to safe water consumption will ever work.

When we have no attachments to place and no attachments to singular sources of water, we have no incentive to keep those precious resources safe from those who value them as no more than means to an end, and we have no choice but to trust the brand images created by competing oligopolies.  When we expect our children to grow up and move out, we don’t preserve ancestral environments for future generations.

It is telling that the Japanese have managed to keep food and water for the most part locally produced and locally consumed despite highly-developed modern infrastructure and a corporate culture that strongly values economic growth and progress.  There is a general revulsion for all things old and traditional; local specialties are increasingly available nationwide; and factory farms interested solely in profit threaten to replace indigenous extended families and clans.

But familial ties and cultural obligations – such as those that brought us to my wife’s parents’s house in the country in the first place – continue to exist, and it would not be a radical thesis that the balance between tradition and modernity which the Japanese have struck in terms of what they put in their bodies plays a large role in the long life expectancy of that nation’s citizens.

I’m concerned that my particular nook has reached a tipping point.  At my house now, in my refrigerator, there is iced coffee, iced oolong tea, whole milk, grape juice, and imojouchuu, which is Japanese potato liquor.   None of these really quenches thirst without additional consequences, and I’m incredibly thirsty.  Today I went out and bought a two-liter bottle of natural mineral water produced by Japanese beer giant Asahi and costing 128 yen.  The bottle has been sitting next to me and being quietly, subconsciously imbibed as I write this article.  I’m almost finished, and I have to pee, which is a consequence of my water consumption that I did not anticipate.

Christopher Carr is an English teacher, technical writer, translator, and photographer based in Fukushima, Japan.  He is the co-founder of The Inductive online magazine and aspires to become a medical doctor.

Can Votes Determine whether Ryan Howard is Better than Albert Pujols?