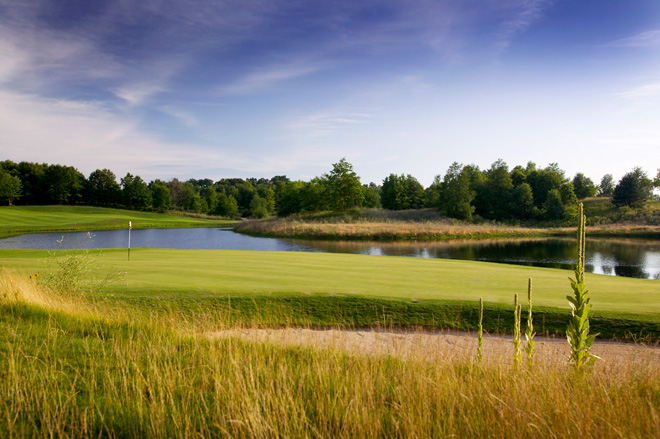 Hillsdale, Michigan. Sports is not one of the topics that regularly comes up on the Front Porch. Human flourishing, whatever that possibly could be this side of the Garden of Eden, would appear to have little to do with the exorbitant amount of money citizens of this U.S. republic spend on athletics. Health care crisis? Why not national sports insurance to bring down the price of a beer and hot dog at the ballpark? And yet, sports, even the professional leagues, is one of the enduring aspects not so much of localism (though high school contests are pretty local) but of American regionalism. You can generally discover an adult’s geographical roots by asking him (not so much her, sorry ladies), which teams he follows.

Part of the inspiration for these unremarkable thoughts was the golf outing that brought together three FroPo’s yesterday just outside of Battle Creek, Michigan. (It was also decidedly ecumenical.) I would like to say that no fossil fuels were used in assembling these duffers and that few pesticides were used on the course we played. I would even prefer to report that no golf carts were driven on said course. But modern golf architecture being what it is, with distances upwards of a quarter-mile between holes and rangers demanding that golfers maintain speed of play, we could not enjoy the walk that makes a round truly enjoyable. Even so, Lord Dumb-Ass (Eastern Orthodox), Professor Polet (Roman Catholic), and I ( Orthodox Presbyterian) butchered and joked our way through one of Michigan’s better courses yesterday before enjoying our own version of the nineteenth hole at one of the state’s better breweries. I would also prefer to note that no off color limericks were told, but the Bar Jester’s new status as Michigan landed gentry has not altered his funny bone. Which is to say, it was a delightful assembly of Front Porch Republicans. No business conducted, simply friendly banter and an occasional good shot.

And with the links between sports and localism tentatively proposed, along comes a remarkable piece found recently in the sports pages of the local newspaper (thanks to my paleoconservative neighbor):

When the Hillsdale Daily offered me a job as the sports editor I immediately wanted to throw my belongings back into the bed of my truck and race north. By August 10th I was driving past shoulder high corn stalks. As I crossed the county line, I couldn’t have been much happier.

I gained a great deal of appreciation for Hillsdale County during my time on the coast. For one, Hillsdale provides space. An abundance of open green land affords us the opportunity to farm, build, garden, hunt, and teach a boy to throw a football or a girl to pitch a soft softball. The land is an essential part of who we are. This connection to the land demands an awareness of the seasons. With each season we perform different chores, play different sports, and repeat different traditions. The order of the seasons gives order to our lives. Right now, for example, the summer heat is surrendering to crisp autumn air. Farmers will spend late nights in their combines while teenagers break out sweat shirts and invite classmates over for bonfires. While we often take these traditions for granted they add richness to our lives.

Many people choose Hillsdale in order to stay close to family and friends. This sense of community is exhibited in many ways but it might be most obvious on Fridays in the fall. We flock to dusty high school parking lots, find a place under those Friday night lights, and cheer on sons, daughters, nephews, nieces, classmates, and friends. We support students who cheerlead or play trumpet in the band. No matter whom we go for, we share in the pageantry, the passion, and the notion that it’s not simply about winners and losers but working hard and performing with class. Therein lays the appeal of foregoing long days of surfing on the sun-bleached shores of Cape Hatteras and coming home to report from the playing fields of Hillsdale. A life rooted in family, community, and the land is a good life.

Perhaps sports should be a Category for articles (short or long) at the Porch.

Thanks to Jason Peters, aka The Bar Jester