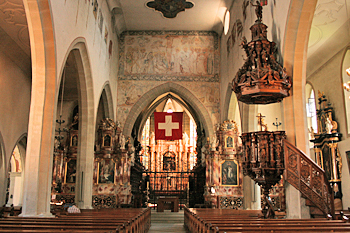 This is an entry in FPR’s One Thousand Words series. Over the next few months, perhaps longer, several dozen contributors will tell us what we need to know about a wide variety of figures—some obscure, some not—in one thousand words or less. Forthcoming: posts on Dwight MacDonald, Mozart, Chekhov, Foucault, Leo Strauss, Paul Gottffried, Charles Taylor, Irving Babbitt, Bernard Lonergan, Machiavelli, and many more.

When he was asked by Michael Albus to characterize the difference between his own approach and Karl Rahner’s, Hans Urs von Balthasar famously said, “Rahner has chosen Kant, or if you will, Fichte, the transcendental approach.And I have chosen Goethe, my field being German literature.”

For Kant, and the moderns in general, the notion that the unifying center of a thing really does appear in the individual thing was denied.When I see this particular tree, therefore, all I see is the appearance of this particular tree. If any generalizations are to be made about it, they will have to come from the side of the subject. This means that the classical transcendental properties of Being—unity, truth, goodness, and beauty—must no longer be conceived as properties of Being, but as characteristics attributed to Being from the side of universal subjectivity. All postmodernity has to do to achieve nihilism, it would seem, is to deny any universal subjectivity. Postmodernism is not so much an alternative to modernism as its reductio.

This may seem a strange way of beginning an essay about an important (and controversial) Catholic theologian of the twentieth century, but if one fails to grasp the importance of Balthasar’s recovery of the transcendentals as properties of Being, one has little hope of understanding his theological project. Indeed, the first thing that the newcomer to Balthasar will discover is that he wrote an entire theological trilogy organized around Beauty, Goodness and Truth—in that order, no less.

So what does this all mean? Modernity is the attempt to find catholicity apart from particularity. Simply put, modernity wanted Christian “values” without having to put up with the scandalous assertions that (1) one man, a Jew no less, at one particular time and from one particular place, held the key to the meaning of existence; and (2) this man safeguarded this teaching to a particular group of (sinful) men. The Enlightenment could have none of this, and so tried to understand this admittedly important “religion” “within the bounds of reason alone.”

Postmodernity, in its turn, came to regard this enterprise with incredulity. Reason, we are told, cannot and ought not aspire to universality, even if it is an abstracted one. All we have are the competing truth claims of differing cultural-linguistic groups, and the most we can ask for is tolerance of diversity.

In Balthasar’s view, postmodernity does not constitute an alternative to Enlightenment rationalism, but rather continues on its skeptical by denying that the whole might shine forth in appearances, thereby denying reality’s ability to put limits on the spiritual subject. As Patrick Deneen has rightly argued, the second phase of liberalism is to emancipate humans not just from nature (that was the first phase), but also from human nature. A nature that cannot be known cannot place parameters.

From a theological standpoint, the catholicity (universality) of Christ and his Church cannot be maintained if one goes down either the modern or postmodern path. As Balthasar puts it, the one who has lost his eyes for worldly beauty—the one who fails to see the mystery of Being shining forth in beings—will be blind to the Glory of the eternal God shining forth in this single man from Nazareth called Jesus Christ.

Here are a few corollaries of the foregoing:

1)     Balthasar insists that we must recover our ability to see the natural order (i.e., creation) as a gift. Gifts are by nature sacramental: they signify more than they are. Here we might suggest that G. K. Chesterton, in essays like, “The Ethics of Elfland,” is the Balthasar of the common man.

2)     By saying that the whole really does shine through in the part, Balthasar is preserving the possibility of knowledge, while preventing any attempt to contain Being in a finite concept. In other words, what shines through in this particular thing in front of me is always more than I can grasp and more than I can say. This guards against the twin dangers of rationalism and skepticism.

3)     The sorts of questions that arise from these considerations are universal ones (the relationship between the One and the Many, the spiritual and the physical, the soul and the body, the eternal and the temporal, God and the world), and will be answered one way or the other, whether implicitly or explicitly. Since the teachings of Christian revelation shed light on these questions, Christian theology is universally relevant to all human questions.

4)     The God question, therefore, is implicit or explicit in all human questions. Or, to quote Thomas Aquinas, to know anything is to know God implicitly. Or, again, God is in all things and inner-mostly.

6)     Unless we are to imply that God was simply taken by surprise by sin (and ugliness), we must insist that there was already in God the capacity for dealing with the separation caused by sin. Balthasar locates that capacity in the “positive space” that has always existed between the persons of the Trinity.This space provides the conditions of the possibility for the Son of God to enter into the depths of the human condition without ceasing to love the Father or be “fully God.”

Beauty, that is, is big enough to handle the distortion caused by ugliness—or sin.

Rodney Howsare is Professor of Fundamental Theology at DeSales University, and the author of  Balthasar: A Guide for the Perplexed.

What You Need to Know About John Lukacs