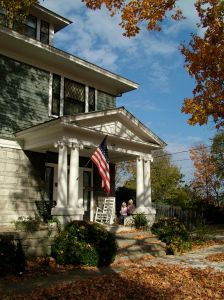 Batavia, NY. My lovely literate wife Lucine (“Armenian for Darlene,” I type out of habit, and wince at the thought of the shoe flying across the room) recently reviewed for the local library one of those pop-anthropological books in which a big-city reporter spends a few weeks in a small town and lives to tell the tale.

I’ll withhold the book’s title, since Lucine said the author meant well, and besides, when a really egregious target waddles into my sights I’ve become like my dad hunting deer—I shoot wide and low and let it lollop away. When I was a mere stripling I’d blast the bastard, but I was so much older then, I’m younger than that now.

The latest Margaret Mead in Podunk committed this sentence: “It’s easy to spot someone who grew up in a small town and got out: they have a breathless air about them, their expressions somehow startled and dreamy.” Talk about the shock of unrecognition: What the hell does that mean? My wife teased a few laughs from its sheer obtuseness. And if anyone can spot the startled dreaminess of exiles from Elm Street it ought to be Lucine, a Southern Cal gal turned rural Yorker who stubbornly resists my kindly efforts to compress her into the John Mellencamp line:

Married an LA doll and brought her to this small town

Actually, as town supervisor and emcee of the Onion Queen Pageant she makes me look like a regular boulevardier, but I suppose as a native I can be identified by some hidden Lovecraftian nodule.

Where this latest tourist among the rustics goes wrong is in not crediting the stay-at-homes with the capacity to dream, and in not noticing that some of those who “got out” dream of returning—a return barred, so often, by the poisonous assumption that “success” in America can be measured in the distance one has traveled from home. My friend Patrick Deneen, who teaches political theory at Georgetown, has written on the decentralist website Front Porch Republic of interviewing at a college (much less prestigious than Georgetown) near his hometown in Connecticut:

“I was inordinately excited at this possibility, thinking that it might work out that my wife and I and newborn son might be able to settle close to family and childhood friends. When asked about accommodations, I proudly informed the college that I would be staying in my bedroom that night – my childhood bedroom, that is. During the two day interview I related in every conversation that I was native to the area and had a longstanding relationship to the campus, having attended its plays, movies, and used its library for many years. I believed my local connection would make me an especially attractive candidate, sure in the knowledge that a school would be attracted to someone who already had deep roots in the community and was likely to build a long life and career in that place.”

In fact, Patrick writes, “this proud display of my nativeness went over badly.” The American professional class does not just accept rootlessness as the cost of achievement—it positively fetishizes it. And so it is befuddled—startled, even—when confronted by a Deneen.

Levon Helm of Turkey Scratch, Arkansas, drummer for The Band and a great American, described a cotton-farming guitar player from Elaine, Arkansas, named Thurlow Brown: “He could have been famous, but he didn’t like leaving his farm, so he never broke out of our area.”

Thurlow Brown of Elaine is worth every deracinated novelist who ever took a table at Elaine’s. But how do we convince young Thurlow Browns to ignore the synthesized drumbeat that tells our children that to stay at home is the act of a loser, and that if you’re not in NY, LA, or DC you’re nowhere?

When another Front Porcher, the reprobate wit Jason Peters, cracked open the treasury of Augustana College a while back to have me out to hector his students, we did a little post-lecture proselytizing in the Quad Cities.

Midnight settled on Davenport, Iowa, home of the late 19th-century local color novelist Octave Thanet. Fearing that her tones had been forgotten by the town she never forsook, and wondering just how I might interest the rantipole youths and roistering blades of Davenport in their native daughter, I took to decorating the men’s rooms of that fair city with obscene graffiti about Octave’s amative practices. Forgive me, Octave, baby. I didn’t know what else to do. Lacking the “breathless air” of those who “got out,” you and Thurlow and I dream on.

Reprinted courtesy of The American Conservative. Subscribe or donate (www.amconmag.com), won’t ya?