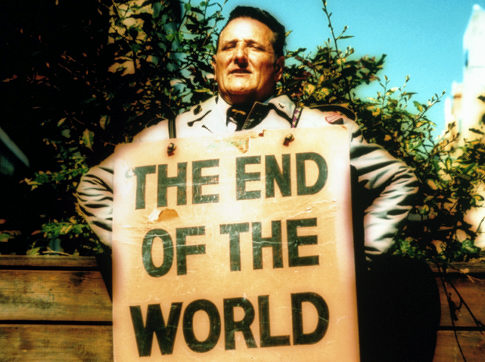 Kearneysville, WV. My neighbor is teaching a friend to shoot a gun. This friend is concerned that times are going to get tough and he wants to learn how to hunt so he can provide for his family. There are, to be sure, no shortage of serious folk, along with cranks and doomsdayers, who are convinced that our lives of peace and plenty are soon to be disrupted. A couple weeks ago, a group of economists warned that the short-term recovery will end when the stimulus money runs out later this year. The mid and long-term prospects are not promising. A news report put matters this way:

“In the long run, the United States must face up to inevitably being overtaken by China as the world’s largest economy. And it may have missed a chance to rein in its largest financial institutions, many of whom remain too big to fail and are getting bigger.”

Harvard’s Martin Feldstein  is not optimistic.

“There’s really not much help coming from fiscal policy in the year ahead. Woes from the dire situations of state and local governments may actually be a drag on growth.

Growth got a lift from a lower saving rate in 2010, but that probably will not last this year as households worried about an uncertain future return to paring back debt and socking more away, Feldstein added. Discouraging declines in home values mean there is less to save from.”

According to Dale Jorgenson, also of Harvard,

“The United States will need to come to terms with the fact that its prevalence in the world is fated to come to an end. This will be difficult for many Americans to swallow and the United States should brace for social unrest amid blame over who was responsible for squandering global primacy.”

As if economic turmoil and social unrest weren’t enough, greenhouse gases threaten to change the climate of the planet and wreak havoc on humans and non-humans alike. Starvation, water shortages, flooding, and fires. No mention of locusts, frogs, or flies, but they are likely in the small print.

And it’s not just the economists and climate scientists who are predicting the end of things as we know it. A radio minister named Harold Camping insists that the world will end on May 11, 2011. This is not the first time he has struck a prophetic pose.

“On Sept. 6, 1994, dozens of Camping’s believers gathered inside Alameda’s Veterans Memorial Building to await the return of Christ, an event Camping had promised for two years. Followers dressed children in their Sunday best and held Bibles open-faced toward heaven.

But the world did not end. Camping allowed that he may have made a mathematical error. He spent the next decade running new calculations, as well as overseeing a media company that has grown significantly in size and reach.”

If you are interested in wading through his textual proofs, there is much more here. Curiously, for all his study of scripture, he seems to have overlooked that bit where Christ insists that the day and the hour are unknown. Camping has cracked God’s code and is spilling the beans. God may not be pleased.

For those who prefer a more pagan flavor to their apocalypse, the Mayan Calendar apparently predicts the end of the world on December 12, 2012. There is, to be sure, controversy about the nature of this end. Some foresee a real end, the final curtain and lights out. Others merely predict the end of one age and the beginning of a new one (a sentiment with long roots). Others insist that the date is no more significant than when the odometer in your car rolls over. This latter option is admittedly a bit of an anti-climax if you are attracted to world cataclysmic events. What? No bang? Not even a whimper? Some will no doubt demand a refund.

Nevertheless, all this gloom and doom is contagious. We live in a time when a certain respectability seems to attach to those who predict the demise of America, freedom, prosperity, or even the world. Of course, this kind of thinking is not new. Uncertain times naturally breed pessimism about the future. Recent books like Cormac McCarthy’s novel The Road pretty well sum up the grim future envisioned by some (perhaps the same people who are learning to shoot guns). Or if you prefer a sort of techno-dystopia, Huxley’s Brave New World is frequently cited as an accurate predictor of a future where the terror is coated with a veneer of drug-induced happiness. Guns aren’t much use in Huxley’s world and ammo is scarce in McCarthy’s. In either case, there is plenty to fear.

Happily, not everyone is predicting the end of the world. In fact, there are some who still hold on to the notion of American Exceptionalism and cherish a hope that America can once again be a shining city on a hill if only the liberals can be thwarted. This view is prevalent on talk radio where apocalyptic pessimism seems to go hand-in-hand with the Reaganesque belief that it’s always morning in America. The extremes play well together, for on the one hand, the pessimism validates both the uncertainty that many are feeling as well as the animosity toward those who have supposedly created the mess. On the other hand, the optimism suggests hope. All too often the solution is quite simple: throw out the liberals and return to the principles of Reagan. Simple diagnosis. Simple solution. Would that reality was so simple.

Oswald Spengler’s 1917 book The Decline of the West put forth a cyclical view of civilizations. Civilizations, in his view, have a life-span much like a biological organism. For those who see America in decline, Spengler’s thesis provides a powerful validation. It suggests a sort of historic inevitability. It seems to provide a perch from which the enlightened can sadly (but wisely) shake their heads as the West slowly collapses into degradation, decay, and finally death.

Spengler may be right. Civilizations don’t last forever. Nations come and go. History is nothing if not change. But at the same time, we should resist the temptation to despair and we should utter our prophecies of doom with great circumspection. As another theorist of history once wrote, “the owl of Minerva flies at dusk.” We come to understand the meaning of history only in retrospect. If this is true, counsels of despair are counsels of cowardice. We are given a moment in history to play a small part in a drama that we only partially grasp. Ours is to remain steadfast. To be faithful. To use our freedom in the belief that all is not lost, that much in this world of goodness and sorrow is worth saving. Indeed, the light may be growing dim in the West. According to some, the world itself is in its final hour. Such pronouncements, however, are best left to the historians of the future and ultimately to God. In the meantime, plant a tree. Be a good neighbor. Have children. Put away a bit for a rainy day. And it might not even hurt to learn how to shoot a gun.

Will There Be Zombies?