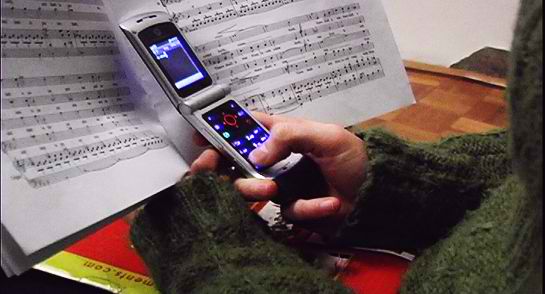 In a former treatise, O Theophilus—and one for which I was monstrously abused, I might add—I said that if you look around you in a movie theater you will see people who are bored out of their minds. I as much as suggested that an affliction perhaps best labeled Default Boredom Syndrome is the very reason people “go to the movies” or “rent a movie” or “Netflix something” in the first place. (The quotation marks there are meant to suggest an habituation to something at best dull and at worst sinister; I haven’t sunk to quoting myself just yet.)

I also mentioned Hank Devereaux, the hero of Richard Russo’s Straight Man, who says that, like everyone else, he just wants to be entertained, the difference being that Hank finds real life entertaining enough, whereas others need to purchase their entertainment. And I think I made it fairly clear—I hope I did—that I’m with Hank on this point.

(One reader attempting to set me straight parted with “the fourteen (count ’em, fourteen) different things Mr. Peters could do to educate himself and to spare the rest of us from any more of his manifest ignorance where film is concerned,” whereupon he listed fourteen directors whose movies I should watch. That is, he gave me one thing to do fourteen times. I don’t know whether his numerical confusion was brought on by too much movie-watching, but I do know that I’m not bored enough to take his advice.)

I’m not opening up old arguments. Rather, I’m trying to get myself and maybe a few others to think about boredom again.

Two articles were recently brought to my attention by a former student of mine (who happens to be the author of one of them), and they both touch to some degree on boredom. The first, “To Understand Boredom, Students Go Back to 1925,” appeared recently in the Chronicle of Higher Education . It is about how the cast members performing Noel Coward’s Hay Fever give up their phones and computers for a week so that they can better “understand the mind-set” of Coward’s somewhat ‘dysfunctional’ Bliss family and get a better sense of why one of the Bliss weekends comes “to a decidedly unblissful end.”

The director of the play says that “part of the reason the family acts the way they do is because they were bored.” And “we aren’t bored anymore”—we who have so much to keep us occupied—so the cast, in an attempt to know Coward’s characters better, paid the past a little visit.

tried to create boredom in the lives of the students by having them sign a contract that limited their interactions with the 21st century. She permitted the time travelers a few compromises—like letting them use their computers as typewriters—so that they could complete job-related tasks and homework. But Facebook was out, iPods were off, and ‘tweets’ were nature sounds heard on campus strolls.

(Daisy Buchanan, the professional socialite, belonged to the targeted era, the mid-1920s, and she was bored; my grandfathers, the dairy farmer and hardware man, also belonged to that era, and they weren’t. But for now I’ll set aside this contrast between the unoccupied rich and the occupied poor.)

The other article, “Tangled in an Endless Web of Distractions,” is … well, it’s about how college students can’t concentrate on their work because they’re always connected to everything but the Socratic dialogues or Metaphysical poetry or the initial force of sliding friction. And they’re not distracted only at night, when they’re supposed to be reading for class or revising essays or figuring out the relation between guanine and cytosine and thymine adenine. They’re distracted—rather, letting themselves be distracted—in class as well, which is making some professors and administrators think about unwiring all the “smart” classrooms (or making them unwireless).

But, you know, what the hell. Who needs studies to show that in short order we’re going to be handing freedom and democracy over to people whose attention spans aren’t elastic enough to get them through bad definitions of “freedom” and “democracy”?

It turns out that students are recurring to “apps” (have I got the right word here?) that for a couple hours at a time will disallow them to access their distractions. Students activate these so that they will have no choice but to do two or three short hours of homework rather than visit their favorite websites or shop online or find out what Mackenzie and Reece did after the concert last night—and where they did it. (What’s to keep these scholars from going off in search of pick-up basketball or a kegger is unclear.)

The article ends with a section called “Help for the Hooked”:

Some apps that can help computer users limit the distractions of the Internet:

SelfControl: Blocks access on Mac computers to e-mail and websites such as Facebook or others of your choice for a set period of time of up to 24 hours. Once enabled, the app cannot be turned off. Katie Inman, an MIT student who recently downloaded this app to help her focus while studying, said some of her friends who use personal computers could use a similar app to block Internet distractions. “I don’t know of any Windows software that does the same thing,’’ she said, “but one of my friends was thinking of coding one.’’

Freedom: Disables all Internet access on a Mac for up to three hours, freeing users from the Web’s myriad distractions.

(Of these, “LeechBlock” has at least the dignity of a good name. The others fail of irony altogether, which is obviously the unum necessarium.)

has developed a new routine to keep from succumbing to the lure of the Internet. Around 9:30 each evening as she settles down to study, she sets the self-control application on her laptop for two hours. She is blocked from Facebook, Twitter, and other websites she does not want to be tempted by.

And there is nothing she can do to disable it once it is set.

“It drove me crazy the other day in class. I turned on the self-control app so I could focus, but I was getting really bored,’’ [she] said. “So I fell asleep.’’

What are we to make of the use of boredom in these two articles? In one, the professor says that because of our electronic thingamajigs we aren’t bored anymore—unlike everyone who lived in 1925. In the other, the student admits as much: when she cuts herself off from the websites that “she does not want to be tempted by”—in class, mind you—she is bored and goes to sleep. The answer, I think, is this: the only way not to be bored is to be endlessly entertained.

Except it ought to be obvious by now that availing yourself of endless entertainment is the surest way to boredom.

A couple of weeks ago on a Saturday I felled a small wild cherry tree, sawed it up and split it. Not one minute of the work was dull. I didn’t wonder what the world was up to. When you open up cherry, all you want to do is smell it and look at it and open up more of it. I can’t say the same about what I did Monday to Friday, much of which involved managing—nay, fending off—electronic distractions. And I don’t even participate in “social media” or own one of those electronic things that you press against your ear and, for the low low price of brain cancer, talk incessantly into.

Say what you will about the benefits of all these things that we at first purchase and at last are owned by. But when we need an “app” for self-control, when we need a Self-Control Button, we’ve sunk pretty far. The future is grim, my friends.