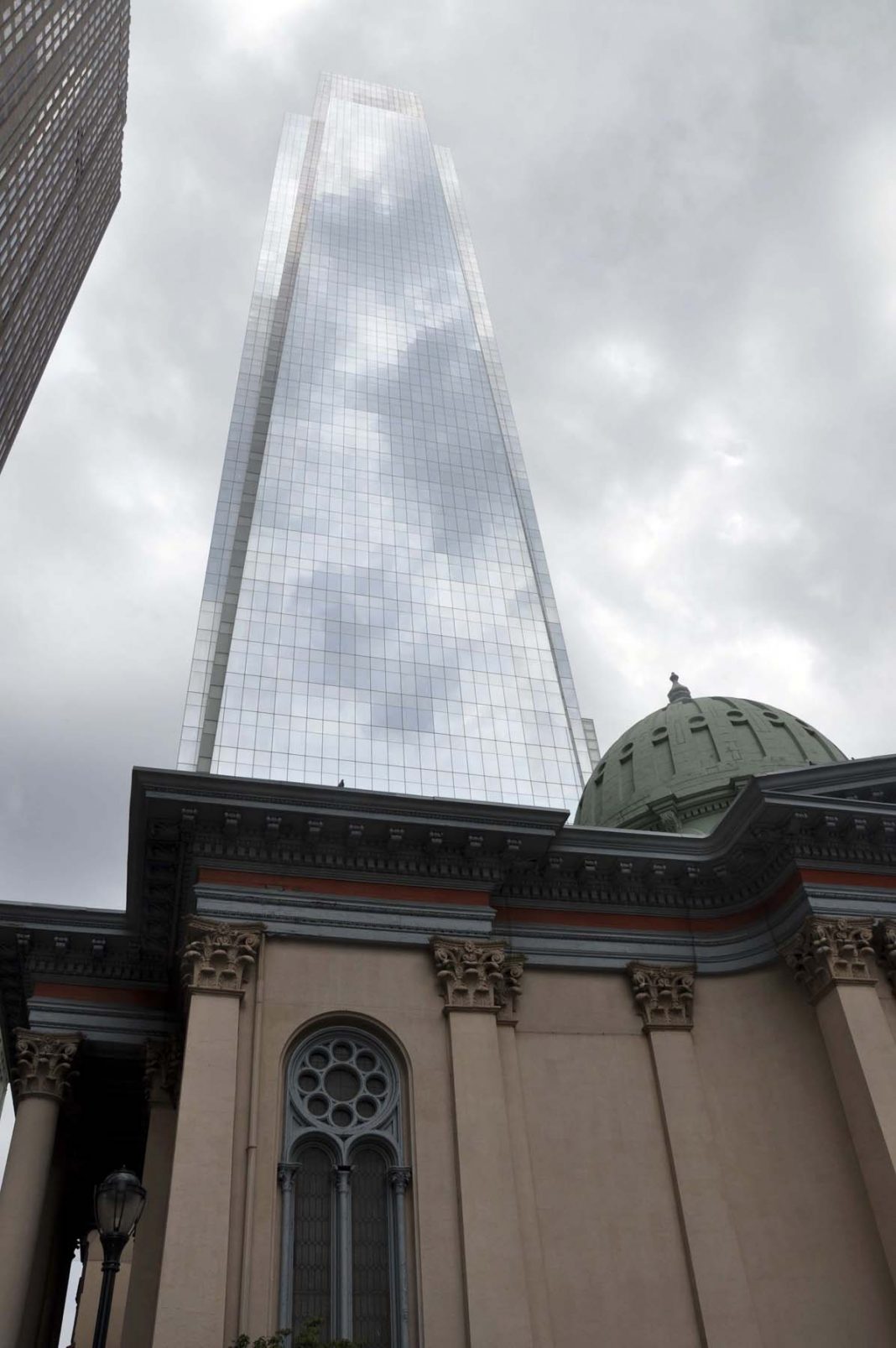 The last time Front Porchers followed my dealings with multi-national corporations I was pleading for forgiveness with Comcast – or at least certain “account executives” (are service people so fragile they need to be called executives?) with whom I had become a tad annoyed (okay, hopping mad). It turned out that part of the reason for aggravatingly long waits on the phone while setting up a new account stemmed from my own stupidity. I had given the wrong address and the difference of one digit on Locust Street in center city Philadelphia opened a chasm between what should have been a 10-minute call and several calls with several “account executives” lasting several hours.

Now my relationship with Comcast has taken a turn for the worst after a move to Hillsdale, Michigan and what appeared to be a simple transfer of service from a high-rise apartment to a house. Relations have deteriorated so dramatically that during a return trip to Philadelphia last month, as I was crossing the street (technically, jaywalking) and a Comcast van was backing into a parking spot to my right, I wondered if the driver was attempting to run me over.

Paranoid? Perhaps. But what kind of reason would still be available to any sane person after learning that switching service from one residence to another in this greatest nation on God’s green earth is as hard as trying to find a way under or around the Berlin Wall? Mind you, a technician in Pakistan can actually reset your modem through the wonders of interconnectivity. It actually happened to me when I was still using Earthlink. And just the other day, on my return flight to Michigan (through Atlanta – talk about connectivity), Verizon was able to reset my cell phone and didn’t even need cables to do it. By dialing *228 some frequency – zapped in my direction in ways that would have amazed Dr. Spock – my phone was back in business and my nerves were free from frazzle. (A Verizon employee standing nearby in the terminal actually offered his own cell phone to ease my communication with service technicians.) So it is possible for engineers and account representatives, even outside the United States, to fix problems in Philadelphia or Hillsdale. The same goes for Amazon – ashamed as I am to admit buying from them – where one simple communication with an account person took a mistaken mini-frig and returned it to some warehouse without me or my wife ever having to call UPS. And we didn’t even need a new Amazon account to make this happen!

Imagine my surprise, then, when I found out that changing service from one location in the United States to another requires a whole new account and equipment. The first sign of this counterintuitive policy was Comcast’s informing me that I would need a new modem and a new router for service in Michigan. Now this state’s economy is bad, and Hillsdale County is not the most up to date with box stores, wine bars, and high speed rail. But it does have indoor plumbing, electricity, phone lines, and even cellular access. These “improvements” are not sufficient for Comcast, however. A new address means a new account and therefore new equipment that Comcast out of the goodness of its heart lends to me as my Internet Service Enabler.

The router – which is all Comcast sent (even though a few days later they the postal service delivered two Priority Mail boxes to return a the old router AND the old modem) – arrived several days after the service technician who installed the new service on the day our belongings arrived. He confirmed my limited understanding of phone cables and internet service by using my existing equipment to set up my new service. The problem, though, was that the new name and password he gave to activate the router took almost two hours to decipher how to use with a live-chat representative – Susy – whose English skills placed this woman closer to South Asia than to lands where Susans go by Susy.

But after those glitches, I figured I was all set and service was good for the first two weeks. Then one morning I opened up my email software and found it curious that I had received no messages, not even from the various academic websites that send me daily news. I tried to log on to the my Internet in-box and the cyber-gods denied my petition. From here it was all downhill.

I spent the better part of one morning learning that my accounts were past due. It was news to me that I had two accounts since I figured my Comcast account would be the same wherever I lived, just like my Travelocity account didn’t change when I moved from California to Pennsylvania. But no, I have two accounts – until my old one is paid in full. And my Pennsylvania account will not be paid up until I return the old modem and router. Meanwhile, my Michigan account, which was also behind in payment thanks to the move and unpacking, did grant me access to email. But here is the kicker – I needed to establish a new personal identification and email address to receive or send email.

So now I have two accounts and two Comcast email addresses.

To speed the elimination of the fees for the outstanding equipment, I decided to drive and return the equipment in person to Comcast’s accounting office in Jackson, Michigan. At the window I learned that the employees working in Michigan have access to information only relevant to Michigan accounts. The woman could not tell me anything about my Philadelphia account or receive my Philadelphia equipment. Get this – the router Comcast sent for me to use in Michigan was the same one I used in Philadelphia – a Netgear number that did not even have a University of Michigan “M” or a Michigan State “S” painted on it. What does distinguish the Pennsylvania Netgear router from the one assigned to me in Michigan is a serial number. I was smart enough to consider this and wrote down at least three sets of numbers from both the modem and router I was now using in Michigan. This didn’t matter. What is lent in Philadelphia must stay in Philadelphia.

I finally made headway and found a solution when later that night, after cursing up a blue streak on my return from Jackson (about a forty minute drive each way), another “account executive” transferred me to a techie. These are the people with real clout. Not only did this cordial fellow have access to both the Michigan and Pennsylvania account information, but he is also at the pay grade that allows him to switch my email account from “suspended” to “active” even if I have not yet paid my bill. He was sufficiently reasonable to understand that the credit to my account for returned equipment would take almost three weeks and to provide me with service in the meantime he simply typed in the right code.

This was the way I thought modernity was supposed to work – efficiency, standardization, the same “1s” and “0s” switching on and off in computers, modems, and routers, carried along uniform cables or transmitted through similar antennae no matter where you live.

But in the Comcast universe, such expectations run headlong against the wall of localism. Apparently, the people who own the Flyers and Seventy-Sixers have divvied up the United States into separate units such that if you move out of one into another you not only need to pay the installation fees – understandable – but you also need a new account and new serial numbers. What havoc my continued reliance upon a 215 area code (thanks to cell phone technology) from Michigan must play in the heads of Comcast service people. 215 is a Philadelphia area code. But it is also my primary number for my Michigan Comcast account. And this means, that if I am not careful, when I call a Comcast representative and identify my account by my phone number they may transfer me to a Pennsylvania agent.

To be sure, all this bellyaching is unbecoming for someone who tries to avoid the Starbucks and Home Depots and Walmarts in favor of local businesses. Am I, someone hostile to large-scale corporate enterprises, really permitted to complain about a localist glitch in Comcast’s global footprint? Shouldn’t I be celebrating that eastern Michigan and southeastern Pennsylvania both have their own sets of modems, routers, and “account executives” who if names Susy really are Susy? Maybe. But as much as my preference for the local may also stem from unwillingness to contemplate the complexities of global markets and communications networks, even this lazy Internet user can spot remarkable inefficiency in Comcast’s service.

Is it enough for me to switch vendors? What, and risk having my delinquency with Comcast endanger my credit rating, not to mention my reputation in the cafeterias where their “account executives” dine? Never. For I know that Comcast’s localism is not the velvet glove covering the iron fist of a corporate giant. It simply reflects the decision by some bean counter to tally profits and incentivize regional sales. If “account executives” fail to perform accordingly, their payroll accounts will go the way of my email account.