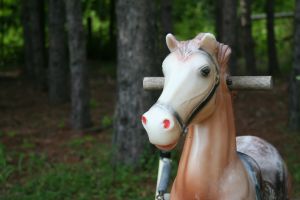 I wrinkled my brow the first time I heard grandma say that granddad liked to ride his hobbyhorse when he had a bee in his bonnet. And I’m certain my bovine stare was a dead giveaway that I found it troubling to imagine him wearing anything but a felt fedora while riding a horse named Hobby. Years later, after I had lots of time to remember, I figured out what she meant.

When granddad returned from town, he almost always got out of the truck mumbling. But he’d stop when he came in the house. He’d get quiet, sit in his chair and look out the window until he couldn’t stand it anymore. Then he’d motion with his head for me to follow him down to the barn, or over to the garden. And when we were far enough away from the house that grandma couldn’t hear us, he’d commence to riding his hobbyhorse.

That was his favorite question, but I knew it wasn’t a question, and I knew he didn’t want an answer. It was like the flickering lights at a Broadway play. It was a signal to be quiet and listen.

“We ignore our children, while they isolate themselves from the family. Then we send ‘em to some therapist, who doesn’t know shit from Shinola about membership in a family and community.”

I can see him in my mind’s eye, pacing back and forth, with his palms turned up like he was pleading with someone.

“Hell, we stand in line for the latest piece of gadgetry that will keep us titillated and distracted then we wonder why we feel so lonely.”

Once, when I was twelve years old we drove to town to buy feed. In the parking lot of the feed-store was a salesman standing on a big green combine, waving his hands and talking in sing-song fashion, like a preacher. He was telling a handful of our neighbors that they could do more and get more if they would go into debt and buy a combine. I knew granddad didn’t like it. His jaws were tight and he was mumbling. Any hopes I had of granddad not making a scene vanished when the salesman said we needed to plant “fence-to-fence.” The vein in granddad’s forehead turned the size of a small garden hose, and he did something I’d never heard him do – yell.

“I know how my draft horses affect my farm, but I have no idea how your goddamn machine will.” It got really quiet, and some men turned around to look at him, while others shuffled their feet and looked at the ground. The men respected my granddad. They knew he was a thought-filled man, who saw the unforeseen consequences that others missed when they were looking for money.

The salesman smiled a big toothy grin and said, “Hello friend . . .”  But that’s as far he got, cause my granddad moved his chaw from one cheek to the other, pursed his lips, and leaned forward to spit tobacco juice on the combine. No one said a word when he turned and got into the truck. The sound of the revving motor was my cue to get in and be quiet.

We rode in silence except for granddad’s mumbling. He was saying something about “remembering,” “storytelling”  and “neighbors.” I didn’t understand what it meant until years later. He was gone and I took my boys to see my grandma.

During the visit she began to speak of my granddad and things past. She pulled a fat album of pictures off the shelf near her chair and showed us a faded photo of men and boys standing around a wagon loaded with hay. They were neighbors, members of one another, who had lived in a world that was now lost. They were storytellers, who lived a common life and came together for barn raisings, hog butcherings, and hay harvesting, because it was what they knew, it what they had always done.

Young eyes searched the picture. “Daddy! That’s you!” My oldest pointed to a skinny kid standing among the men. It was then that I understood why my grandfather was upset, why he paced back and forth, pleading with his palms up. The loss of local memory was as clear to him as that combine in the feed store parking lot. He knew that we would lose more than topsoil if we tried to exceed the natural limits imposed by God and the land. But in my moment of knowing, I felt a dim surge of hope. Two boys were sitting at the feet of their great-grandmother to hear her remember.

Doug Sangster lives with his wife in Houston Texas.

What’s in a Name?