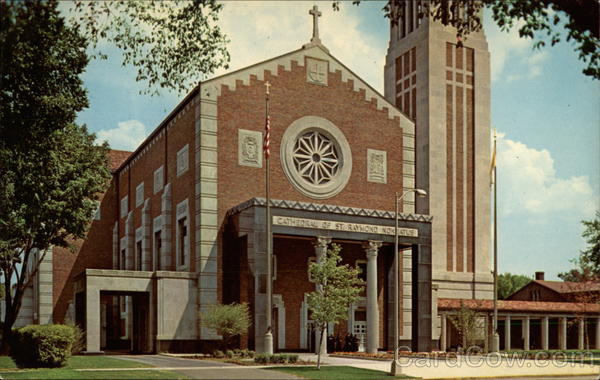 The following is an excerpt from David Masciotra’s book-in-progress, Faith That Won’t Die: Death, Defeat, Sex, and Spirituality in One Rust Belt Town.

On a winter afternoon I took a walk to St. Raymond’s Cathedral in Joliet, Illinois. The chilled wind sliced across my face and I felt my mustache turn to ice. The cracks on the narrow streets filled with drops of snow, while grimacing students in their late teens and early twenties carrying backpacks walked past me, headed in the opposite direction towards the University of St. Francis—a small, Catholic liberal arts college where I graduated from with a Bachelor’s Degree in Political Science just a few years ago and now teach English classes as an adjunct instructor, which is higher educational code for indentured servant. The dented, rusted, and aged cars parked on the curb, bumper to bumper, mostly belong to these students and others like them. The University has intended to lay out additional parking lots for a long time to meet the growing needs of commuters. Since the financial collapse, fewer students can afford to live on campus, but the school has fewer disposable dollars to accommodate them. No parking spaces. Much of street side parking requires a residential permit. We’re all walking.

My walk ends at the majestic and towering brick Cathedral. It has a steeple on top of its bell tower, which rings thunder from the clouds every day. It is a way to keep the time for the surrounding community. Routinely ignored by most, ringing bells become part of the cacophony of car radios, honking horns, jolting cell phone conversations, and the typically toxic funk of traffic. At the bell tower’s foot are a few wooden benches. Mother Theresa sits on one all night and day, smiling and wearing a coat of bronze. There are a few lonely cars in the parking lot, which is slightly visible from the front entrance of the giant church, but no signs of life.

Jesus Christ hangs from the cross, elevated above an altar of shining marble. Ceramic statues of Mary and St. Raymond are to the immediate left and right of Christ in his crucifixion pose. Chandeliers hang from the domed ceiling, and the white walls are directly implanted from a palace. Gold borders the space around the massive crucifix, and intricately detailed and colorful paintings of iconic scenes of religious pain and jubilation hang to the left and right of the pews. Jesus carrying the cross, the angel appearing to Mary, Jesus’ baptism: The stories Sunday school children are taught to remember by rote, and then eventually forget when party invitations, bills, and paychecks fill the mailbox—electronic or otherwise—to full capacity. No room for anything else, whether it be memorable or prophetic. The statues, sculptures, and paintings all seem like servants to the building’s true master: size and scale. It is so big and wide, but eerily still and unmoved. It was built by hand at the order of people who thought of praising their Lord, but also inspiring their people.

As much as people’s bodies need food, drink, and sleep, their spirits need beauty. Beauty uplifts, beauty compels, and beauty pushes people toward goodness, because it is tough to be ugly in a beautiful place. Narrow thought and limiting hate are ugly. In the face of beauty, especially that which is blinding, only grandness is possible—grandness in thought, grandness of intention, and grandness in love. George Clooney plays a contract killer in his movie The American. He’s drawn to the beauty of nature—rivers, butterflies, and birds—but lives a life of hideousness, emptiness, and death. A priest he befriends tells him that it is impossible not to believe in hell, because he lives in it. He “lives in a world without love.” It is only once the hitman finds love, through the channel of beauty carried by a breathtakingly gorgeous and good hearted prostitute, that he decides to leave his life of killing for profit and power. Beauty brings him to love and love opens up universes of ethical and edifying possibility.

Beauty is the reason I come to St. Raymond’s. Dr. Cornel West reminds wandering sheep that “God is in the funk.” A bleeding, beaten, and unwashed Jesus hung from a cross of rain soaked wood while people spit on him. West won’t let anyone forget that, especially those who feel nauseous at the sight of a besotted bum, skeletal woman in her dying bed, or insect surrounded child who tries and fails to imagine an unmolded loaf of bread. But then there’s beauty—in its miniature and gigantic forms. The beauty of this church or the beauty of a woman whose smile speaks of something pure in a whore house. The Mystery We Call God, as one priest struggles to name it, is most palpable in moments of awe when for a fleeting flash of joy and soulful chaos, we transcend the emotional and physical limitations of the tangible world. The phrase “falling in love” denotes a helpless, unstoppable dive. To be uplifted implies floating on air, and inspiration translates to being filled with the spirit—an external, incommunicable, and uncontrollable force passing through the body without warning and without schedule.

My friend Father Ed Ward—a Carmelite priest in his 60s who was born and raised in Joliet—writes about the cultural shift from iron and steel to plastic. Mighty metals told audiences in arenas and congregations in churches that “Come hell of high water, the places were not going to change or be changed.” “Times have changed and so have buildings,” Ward writes before he adds with tears dripping off the page, “Today it is plastic which rules, not iron or steel. Plastic has three characteristics that modern society loves: artificiality, disposability, and synthesis.” Those three qualities add up to convenience. Beauty is never convenient for people to deal with and neither is strength. It is little wonder then that buildings like St. Raymond’s aren’t built anymore. Churches look like sporting arenas or office complexes from the outside. Inside they are carpeted, cold, and comfortable. The beauty, strength, and challenge of the old buildings is gone and in its place comes the “artificiality, disposability, and synthesis” of a culture addicted to convenience. St. Raymond’s and its architectural allies are relics—surviving and visible ghosts haunting us with the sights, sounds, and smells of a bygone era.

The dusty, wooden pew creaked like a dying dinosaur when I lowered myself into its unforgiving curvature. I never think about what I’ll do when I sit down and feel insignificant from the inside of a mountain. I prayed, but I can’t remember exactly what for. I may have prayed for myself—that I find a way to build a life of security and stability during horrific times of economic and social misery in my country and that I manage to express the edgier aspects of life balanced by a vision of hope in a seemingly hopeless world. I might have prayed for the community, for Joliet—a working class foundry town that’s been through hell since the factories shut down and small businesses moved out, and is trying to resuscitate itself into a breathing center of commercial and communal life. It’s possible that I prayed for my country, which grows darker under the cloud of depression and division every day. Maybe I didn’t pray for anything in particular. Prayer is a meditation—a dialogue with yourself as much as it is a dialogue with a God. It is a moment in which the individual can discover his priorities, values, and anxieties. Navigating the terrain fertile for self-discovery seems possible only in big spaces of stillness. Technology and progress are unanimously celebrated by most people in business, science, and politics. Cell phones, computers, and the increased automation of society encourage the dominance all forms of machinery—electronic, social, and spiritual. As long as people aren’t pausing to reflect on themselves—their lives, families, and communities—they are accepting the reality financial and political power dictates to them.

St. Raymond’s is a sanctuary from the familiar chaos and argument taking place outside it. The (Joliet) Herald News gives readers headlines about the Joliet Jackhammers—a local minor league baseball team—going bankrupt. At the University of St. Francis, everyone is holding on to their chairs with white knuckles, guarding themselves against the inevitable layoffs which will result from the current budget crisis. The downtown revitalization of Joliet is at a standstill. Businesses aren’t opening up around the casino—as city leaders hoped when they cut the ribbon on the gambling house—they are shutting down. Elderly people bet away their social security checks and poor people pull the lever with visions of millions in their heads, while the valet drivers park cars directly across the street from the electronically sparkling Harrah’s sign. Whoever runs the casino paved the parking lot over the ashes of St. Mary’s—the church at the center of downtown Joliet where residents once congregated and my friend Ed was ordained. It burned down a few years ago, creating room for vehicles within convenient distance from the casino’s front door. St. Raymond’s is a sanctuary from not only the cacophony of noise, blinding orgy of flashing lights, and buffet of distraction at Harrah’s, but also the larger cultural milieu that the casino represents—Twenty-four hour news and entertainment, internet speed attention spans, and political cycles of focus that spin at the speed of the wheels on a Harley.

St. Raymond’s is a sanctuary, but it is also a house of subversive activity. Breaking free from the voices, soundtrack, machinery, and plastic of consumption and advertising gives an individual the opportunity to consider questions and ideas that the world outside St. Raymond’s continually beats into the ground. What is the role of the citizen? What is love? What is democracy? What is justice? Is hope possible? Where and when are real meaning, faith, and pleasure possible? Big questions in a big place for small times.

David Masciotra is the author of Working On a Dream: The Progressive Political Vision of Bruce Springsteen (Continuum Books). He is also a columnist withPopMatters and regular contributor to Relevant. He is 26 years old and lives in Indiana. For more information go to www.davidmasciotra.com.