Front Porch Republic
Home Articles Culture, High & Low The Computer Made Me Do It 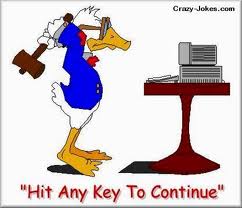 Kearneysville, WV. Recently I had my driver’s license renewed. After I sat for my new picture, the lady behind the counter asked if I would like to have my fingerprint included in the information kept on file. I told her no. After all, I can’t think of any compelling reason they would need my print. Nevertheless, I was told that “the computer says you gave your fingerprint last time and it can’t proceed unless you give it your print this time.” Without much thought I sighed, stepped forward, and let the electronic gadget take an image of my finger.

But even as I did so, something seemed odd. The lady didn’t use her authority to compel me to comply with a specific rule or law. She didn’t speak as if the power of the state was standing behind her words. She merely told me that “the computer says” that I needed to behave in a certain way, and I did.

I am bothered by my quick and unquestioning compliance with the authority of a machine, but if this was an isolated incidence, it wouldn’t be worth mentioning. However, consider how often we behave in a certain way because a machine, often sporting a pleasantly benign human voice, instructs us to do so.

It is today a somewhat rare event to actually speak with a human being when calling for help or information. Instead of a person we get a computer impersonating a person and as a result the possibilities of this interaction are dramatically narrowed. “If you are looking for our operating hours, say ‘hours.’” And we obey, perhaps grudgingly, but the alternative is a dead end, for though the voice is that of a friendly woman who seems almost too eager to please, the strictures on the “conversation” are limited. If you fail to speak clearly, “she” will say—still in that perfectly pleasant voice—“I’m sorry, I didn’t get that. Could you say it again?” Speak clearly and “she” moves on through “her” narrow range of options. “If you want to go back say ‘go back.’” And you can backtrack to the fork in the “conversation” that might yield more fruitful results. I fear for my sanity the day I tell “her” thank-you at the end of our “conversation.”

Or consider the helpless office worker, perhaps at a bank, who sadly shakes her head and tells you she can’t do what you are asking because “the computers are down.” She can’t take my money, can’t run my credit card, can’t release a needed document. We have become so dependent on this system that we are forced to put our lives on hold when the computer breaks. Is that a healthy level of dependence?

But as my experience at the DMV indicates, the problems are not only when computers go down. They can be programed to insist on a particular series of actions and if those actions are not performed, the computer will “refuse” to comply with the user’s request. Again, the range of options is quite narrow and our ability to negotiate is forfeited since we are dealing not with a person but with a machine.

Perhaps some level of automation is necessary in our complex age, however, the potential downside should not be ignored. I would like to suggest at least three implications of our current situation. First, we are learning to obey anonymous authorities. When the clerk shrugs his shoulders and says he can’t do what we ask because “the computer won’t let him,” he is showing his powerlessness in the face of the authority of the computer, and we comply knowing that there is no one to whom we can appeal. The habit of complying with the anonymous authority of a machine is little different from complying with the anonymous bureaucrat who insists that he can’t do things in a certain way because “the rules” forbid it. In either case, obedience becomes habitual and unthinking.

Second, we are growing accustomed to taking orders from irrational devices. This obvious fact is easily forgotten when the irrational device is given a pleasant human voice and even thanks us when we obey. But is habitual obedience to an irrational voice a healthy thing?

But the habit of questioning, of civil debate, of negotiating, and compromise are precisely the habits necessary for a thriving democracy. They are the mental habits required of a free people. To the extent that our machines teach us to comply without question and to thoughtlessly obey anonymous and irrational authorities, we are sowing the seeds of complacency and servitude. I suppose I should have refused to give my fingerprint at the DMV, but what could I do? The computer insisted.