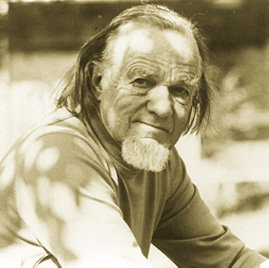 Ryan Lizza’s piece on Michele Bachmann prompted an avalanche of posts from bloggers and columnists who took issue with effort to link the Congresswoman from Minnesota to the political theology of Dominionism. The genealogy appears to be Bachmann’s acquaintance with Francis Schaeffer, the founder of the Christian community in Switzerland, L’Abri, and missionary-apologist whom Garry Wills called the father of the Christian Right. Bachmann absorbed Schaeffer’s critique of secular humanism and its effects on the United States and the West. Schaeffer himself originated from the fundamentalist sector occupied by the inveterate anti-communist, Carl McIntire, and then found a more sophisticated approach to Christ and culture through the worldview thinking of Dutch neo- Calvinism. (Schaeffer was a friend to and influenced by the art historian, Hans Rookmaaker, who taught at Abraham Kuyper’s Free University in Amsterdam.)

If readers are already bleary eyed, there is one more connection between Amsterdam and Bachmann – Herb Titus, who established the law school at Oral Roberts University before it relocated to Pat Robertson’s Regent University. After his conversion, Titus spent time at L’Abri. Truth be told, I was a student there with Titus, which was also the fall before the 1976 presidential election when Schaeffer appeared for the first time on Pat Robertson’s show, “The 700 Club.” Bachmann apparently studied at Oral Roberts when Titus was there.

None of this constitutes a smoking gun, and that is partly what all the kvetching is about. Many interpret Lizza’s piece as a way to smear Bachmann (and Schaeffer) with a bizarre and obscure form of Protestant theology, Dominionism, that looks to the political order and legal system of Old Testament Israel as a blue print for government, both modern and ancient. Some object that Dominionism is in fact obscure and so it is almost impossible for Bachmann to adhere to it. Others complain that Schaeffer was not really a Dominionist. Others also explain that what Schaeffer taught, and what Bachmann represents, is a Christian worldview that is at odds with the secular outlook of reporters like Lizza.

Lizza ironically did the Religious Right a favor by using the word “Dominionism.” This way, evangelicals and their social conservative friends can discredit his analysis as another gotcha moment and avoid taking a hard look at the limits of their own political theology.

Whatever Schaeffer’s involvement was with different figures in the Dominionist movement – R. J. Rushdoony’s fingerprints keep turning up – the little man who wore a goatee, long hair, and knickers, he was remarkably popular among all sorts of Protestants, both from Reformed backgrounds like his but also among Pentecostals and garden-variety evangelicals, because of his appeal to the Bible alone as the basis for truth. Schaeffer was particularly concerned about God’s law as the standard for human law, but in general he drew a contrast between special revelation and autonomous human reason. He even blamed the downward spiral of Western civilization on developments in medieval theology. Unlike Richard Weaver who attributed the demise of the West to William Ockham, Schaeffer went to Thomas Aquinas who, according to Schaeffer, separated grace from nature and so untethered political and cultural realms from biblical truth.

This part of Schaeffer’s thinking was common among born-again Protestants. His early mentor, Carl McIntire, conceived of the United States in biblical categories. But even when Schaeffer received a higher-octane account of the biblical foundations of western civilization from the Dutch Reformed tradition, he still wound up painting himself and his readers into a corner from which they have not figured out a route of escape – namely, how to live in a free society with people who don’t believe and don’t follow the Bible. The Dutch wrinkle of Schaeffer’s thought may have made for better theory and more books, but it was no less threatening to a society of mixed faiths. For at the root of political developments, according to neo-Calvinism, was the fundamental difference between belief and unbelief, what the Dutch called the antithesis. According to this division in man’s spiritual character, autonomous reason inevitably led to the sort of rebellion and lawlessness on display in the French Revolution, while true faith was at the basis of the political orders that arose from the Reformation – the Netherlands primarily, but also could include Scotland under the Presbyterians, England under the Puritans, and even the Americans under the good tutelage of John Witherspoon, the only minister (Presbyterian to boot) to sign the Declaration of Indpendence.

The point here is that even if Schaeffer is innocent of Dominionism, he understood truth in such a way that it only came from Scripture and ultimately could only be perceived truly by believers. This was not simply Schaeffer’s fault but also most Protestants in the United States who trace some of their devotional heritage to the revivals of the Second Great Awakening. The problem for this outlook is what to do with a body of law – the Constitution – that does not even acknowledge God, let alone draw its strictures from Scripture. Also, what to do with elected officials who are not believers? Can we trust people (not simply gays who want to marry) but all folks who are fundamentally in rebellion against God?

This problem was recently on display when Bachmann received a question about whether her husband, if she were elected president, would be the head of the White House, since the Bible says that wives should submit to husbands. The faithful interpreted this as another effort to discredit Bachmann, and surely it was. But it was also the same sort of question that reporters used to pose to Roman Catholic candidates – JFK and Al Smith come to mind – or to Mormon politicians – Reed Smoot, Senator from Utah is an example. Here the question was that since Roman Catholics and Mormons were under the authority of figures whose laws were different from the Constitution, how could they plausibly uphold the U.S. Constitution. Some of the people asking this question were also Bible-believing Protestants who never had an ounce of misgiving that their own loyalty to the Bible might be in tension with their oaths to the Constitution. For most Protestants, the Bible and the Constitution were in fundamental harmony, or at least Protestants were free to interpret the Bible according to the liberties protected by the Constitution. But anyone who has read the Pentateuch, the Sermon on the Mount, and the Constitution knows that the ideals of checks and balances, small government, and freedom of religion, are not readily found in Scripture.

Which means that Bachmann is only having to endure now what other believing candidates had to face. It may also mean that if those questions were plausible before – they were at least to evangelical Protestants who would not vote for Roman Catholics and still are squeamish about Mormons – they are legitimate now for a candidate who proclaims that the Bible is the only standard for truth and goodness, and that his or her faith goes all the way down – it is not something you leave behind at church on Sunday but it follows you all the way into the corridors of power. Okay. So if you are a born-again, Jesus-in-your-heart Christian 24/7, then how exactly do you submit to your husband when you, a woman, are the leader of the free world? It is a good question.

The shame here is that we are over three decades into the shot-gun marriage of conservatives and evangelicals and the latter have apparently not learned a thing from the Right. (For proof of that assertion, please see – self-promotion alert! – From Billy Graham to Sarah Palin: Evangelicals and the Betrayal of American Conservatism.) Conservatives were often Christian and shared evangelical convictions about the importance of religion as the basis for culture. But Conservatives were never so biblicist about it. Instead, natural law was a way of appealing to a common set of truths derived from the creator of the universe upon which people could try to establish a peaceful, free, and orderly society. It was also the grounds for trusting neighbors who didn’t have Jesus in their hearts; the law written on their hearts would keep these God-deniers from most criminal activity and maybe even lead to genuinely neighborly acts.

But do evangelicals appeal ever to natural law? Some are beginning to think about it. But early returns are not good. Evangelicals are still squeamish. Natural law, they fear, is not as clear as the Bible. Never mind that the Bible is so clear we have gazillions of Protestant communions and independent congregations, each with its correct understanding of Scripture. Evangelicals could even read someone like David VanDrunen on a biblical case for natural law. But even the Bible’s own teaching is apparently insufficient.

McCarthy, Nash, and the Story of the American Right

American Enthusiasts At The Gates: A Review of D.G. Hart’s From...