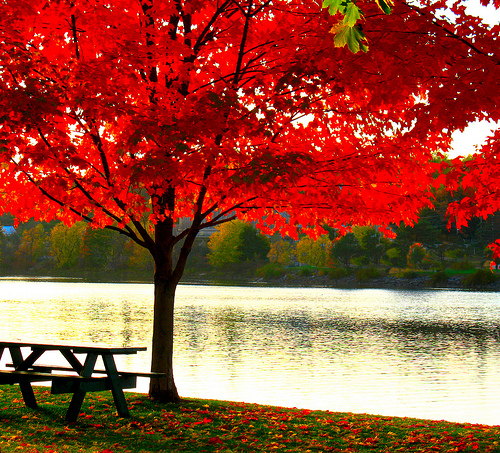 Red toryism claims to be re-defining the political landscape, moving beyond the old hegemonic debates as to whether the best kind of government is socialist and statist or liberal and individualistic. In the context of English politics, Philip Blond and others have advocated a new type of conservatism different from big business, big government conservatism. They have argued that localism, community action, ethics and environment should be the first concern of true conservatives.

The choice of the name ‘red tory’ would appear to be an attempt to situate these ideas outside of the usual ideological categories. It signifies approval of a bottom up conservative culture combined with a dedication to social justice. The political label ‘red tory’ is imported from Canadian political culture. There its usage has been somewhat varied, and given its intellectual pedigree I have wondered if that history is what Philip Blond wants it to be. As I have some sympathy for this movement and its attempt to leaven the dough of our technological and hegemonic society, I would like to relate a little of the history of this term in Canada.

George Parkin Grant is the conservative Canadian philosopher who was most often identified as the quintessential red tory because his ideas were not easily categorized within normal party politics: he was a friend to the left while being a conservative, and hated the liberal party for its toadying to big business and American power, and bringing forth an alliance of government and market forces that he thought had seriously weakened constitutional government. But he said a number of times that he was not a red tory.  He was a tory or conservative, simply, but more than that, a philosopher.

I believe that he thought that the label red tory inadequately described what he was about, which was to place before his readers a philosophical critique of modernity, not a plan for practical politics. He did not advocate political solutions, but rather taught his students to think more deeply about how to live well, and to think outside of those ‘isms,’ those paradigmatic categories that dominate politics. So not only did he dislike liberalism, which identifies the primary good with the making of money, and marxism, for its utopian dream of dominating both nature and human nature through technology, but he disliked all easy ideological solutions to the problems of the day.

This latter point is important — it was Gad Horowitz, the socialist professor of political science at the University of Toronto, who first called Grant a ‘red tory’ in an article published in 1966, entitled “Conservatism, Liberalism, and Socialism in Canada.” In so doing Horowitz gave intellectual respectability and explanatory power to a theory which attempts to account for why conservatives in Canada shared some practical political goals with socialists on some matters of public policy.

In this article Gad Horowitz following the American socialist (some might say liberal) political historian Louis Hartz, author of The Liberal Tradition in America, argued that the political culture of North America was shaped by ideological fragments carried in the thinking of European immigrants when they came to the new world. The American colonies were settled by people who were for the most part adherents of an English brand of whig-liberalism, and this became more pronounced after the Revolution of 1776 when the loyalists, who had a ‘tory streak’ to their thinking, left the country.  Thus all politics in the United States falls within a whig-liberal paradigm. Canadian culture was influenced in part by the loyalist ‘whigs with a tory streak’, but also by whig-liberals, and eventually by English socialists, hence giving it three distinct political parties.

According to this theory, tory-loyalism is organic-corporate-hierarchical in nature, it is sympathetic to government corporations that promote national unity.  For example, Conservative Canadian governments had been friendly to the creation of national institutions supported by tax money, such as the CBC, because such institutions strengthen the organic unity of the nation. In legislating these institutions Canadian conservatives had allied with socialists who are egalitarian-rationalist-corporate in their thinking. This common corporate and organic bias made the red tory the friend to the socialist against the individualist, free market liberal, or so the theory goes.

Whatever one makes of this theory as a whole, it presumes a progressive paradigm. Each ideological wave would advance political liberty and equality through new government regulations and public corporations until finally an egalitarian society would be attained through socialist party influence and the eventual demise of old tory ideas of hierarchy. Horowitz’s theory, therefore, presented conservatism as a precurser to liberalism and to socialism, no more, and necessarily part of the same project. There was to be a grandfathering of socialist public policy through the help of corporatist-organic tories in government, and that grandfathering was the peculiar role assigned to the red tory. From my standpoint, it seems a perfectly legitimate reading of the Hartz-Horowitz thesis to say that it gives no place to the tory, understood as a serious critic of social utopianism, progressivism, or public planning. The red tory seems to offer no intellectual critique of progressivism that has merit. I suspect that put in this light, Hartz’ read on toryism has few serious takers among English red tories, and they might want to situate their red toryism outside of that theoretical framework.

For this reason and more I believe that George Grant, despite his friendship for Horowitz, did not want to be labeled a red tory. His serious study of historical philosophy and his love of Plato’s dialogues had not led him to believe that the western world was advancing toward some kind of perfectly just man-made regime, or that people today were more capable of constructing a just regime today than in the time of Socrates or Christ.

Grant did have a great love of those on the left who worked for the poor and the weak, particularly those on the Christian left like Dorothy Day, who founded the Catholic Worker Movement.  Grant had praised the youthful revolutionaries of the 1960s who wanted to ‘opt out of the culture’, because they stood for a kind of protest against technological modernity which Grant thought important. His hatred of the liberals, and the corporate culture being imported into Canada from the United States was visceral. In this he looked like Horowitz’s red tory, an enlightened, anti-liberal, quasi-socialist.

However, when asked by Gad Horowitz in an interview, if he thought that the cultural revolution of the 1960s might be a way out of the liberal dominance of society, the technological trap, that it might be leading somewhere (the predictable question of a progressive), Grant replied:

“’Leading anywhere?’ Not if you mean change of the society as a whole. The society is given over to mammoth technological institutions and there are certain requirements given in the nature of these institutions that you cannot escape. But it is, luckily, a very rich society, therefore a lot of people can drop out and take its benefits while living outside of it…. I think people who try to make new living institutions – you know, family schools, and other forms of institutions – in this society are just magnificent.” (“Technology and Man: An Interview of George Grant by Gad Horowitz”, Collected Works, III)

Socialism could offer no better solution for the evils of society than liberal individualism. There was no possibility of obtaining substantial and permanent improvement of the human situation. The good life is a continual struggle to be just, to protest what was unjust, to act justly, think truly, in contemplation of the good. It was not attachment to a particular party program.

So, if all the red tory is, is a progressive conservative who is half-way to becoming a socialist, then possibly it lacks that really critical edge, that yeasty leavening, which would mark a serious critique of contemporary politics. But if a person calling him or herself a red tory wants to question the justice of a technological, hegemonic state in the name of living well and wisely, as have philosophers and Christian saints of the past, then it would seem that they might want to distinguish themselves more completely from socialism and political conservatism in name.

Ironically, insofar as Grant was admired by socialists for his genuine attachment to a view of the world which went beyond simple ideological association, and expressed great respect for the life of philosophy and Christian sainthood, maybe then what those socialists were really seeking was the kind of philosophical understanding, the knowledge of the good, provided by the life of the philosopher.  If so, that would make socialists (and indeed all contemporary seekers after ideological solutions) a variety of poor philosopher in search of the knowledge of that good which the Grantian philosopher might provide.

Roberta Bayer is Assistant Professor of Government at Patrick Henry College and editors of Mandate: The Magazine of the Prayer Book Society.