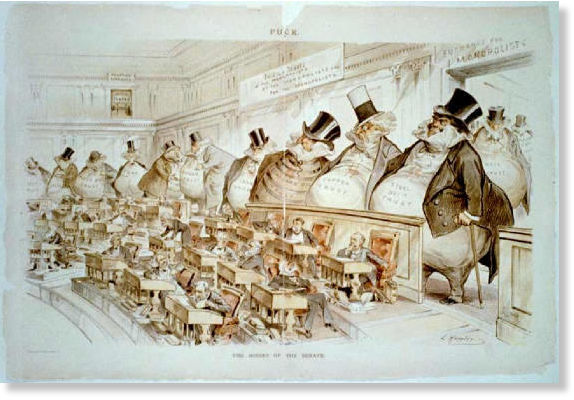 The “Occupy Wall Street” movement has proved to be significant in its appeal – a majority of Americans support the movement, even though it has been less than articulate in delineating its positions.   Why is that?  I suspect it’s because most of us are thrilled to see any mass movement challenge the status quo, even if the best it can do is to say “We demand change to the status quo”, and “Wall Street is a problem”.

But despite the lack of clarity in its goals, like a wildfire the movement has spread across America and the globe, shifting in focus from “Occupy Wall Street” to “Occupy Whatever” (supply the name of your city or college/university, guilty or not, or whatever).  What started out of well earned revulsion towards the financial sector almost overnight turned into a national and global expression of disgust with the status quo, all of which has now been encapsulated in the notion of “occupying”.

There is more to this movement than the national media, and maybe even the “occupiers” themselves, recognize or understand.  What might be described as the “trademarks” of the movement have been the slogan “We are the 99 percent” (wishful thinking, economically speaking) and  its insistence on collective decision making, exemplified by the (to my mind, cheesy and creepy) collective recitation of resolutions.

These “trademarks” are the key to understanding the widespread support for this movement.  The slogan “We are the 99 percent” draws attention to the truly enormous inequality in the distribution of wealth in the United States, where the wealthiest one percent of the population possesses twenty to twenty-five percent of the collective wealth of the nation.  The movement’s insistence on collective decision making and “direct democracy” reflects an instinctual understanding that neither of those things is happening – or can happen – in our current political reality.  And therein, we must recognize, the problem lies.

America is not a democracy in any way that the ancient Greeks, who coined the term, would have recognized.  To the Greeks, “democracy” meant what the roots of the word mean:  rule (cratia) by the people (demos).  The Athenians invented – and fought for – this notion of government by the people and for the people, and in their democracy the citizens as a whole were sovereign:  the people were the government and the ultimate deciders of all issues pertinent to their state.

Political Scientists would say that America is a “representative democracy”, meaning that as a nation we elect a president, a vice-president, and members of the House and Senate who (in theory) represent the people as a whole, and also regionally (the House) and by state (the Senate).  How did we get here?

Our founders were deeply versed in the languages, cultures, and history of the Greeks and Romans.  They were convinced that the “radical” or “direct” democracy of the Athenians had been a relatively short-lived experiment which, ultimately, succumbed to its own weaknesses.   The weaknesses our founders assumed to be inherent in a direct democracy, however, had become the “accepted wisdom” in the historical and philosophical literature of the Greco-Roman world, in which monarchy and oligarchy triumphed over democracy.

Our founders overlooked the fact that the Athenian democracy which ultimately made the (very) wrong decision to go to war with Philip II of Macedon (Alexander the Great’s father) was also the same democracy that had been among the foremost in turning back the Persian empire’s attempt to conquer Greece a hundred and fifty years earlier.  This same democracy also created an empire for itself and many of the things we consider to be the hallmarks of classical Greek culture, including the Parthenon.  In Athenian democracy, the benefits accrued by the people as a whole were shared among both the rich and the poor, and the wealth of the rich was harnessed to the public good.

In all of this lies the intersection between ancient history and the “Occupy” movement.  From the perspective of the ancient world, our government in America is not a “representative democracy” – a fanciful and euphemistic coinage no ancient would have (with a straight face) recognized – but an extreme oligarchy, a rule (arche) of the few (oligoi).

How few?  Again, the ancient world is useful for comparison here.  Sparta (of “The 300” fame) was the model for,  and the protector of, oligarchy in ancient Greece.  At its height, its population of around 9,000 full Spartan citizens was ruled by 35 individuals (two kings, twenty-eight elders, and five “overseers”).  Sparta’s ruling class, therefore, amounted to less than half of one percent of its population; if we include all of the people Sparta controlled in addition to its citizens, then the ruling class amounted to about one tenth of one percent of the population).

In America we currently have a population of over three-hundred and twelve million people, ruled by five-hundred and thirty six elected individuals (four-hundred and thirty-four in the House, one-hundred in the Senate, and a vice-president and a president).  That means that our “rulers” represent just a little over two ten-thousandths of one percent of our population.  To put the situation in more understandable  terms, America is well over two-thousand times more oligarchic than Sparta was.

The “Occupy Wall Street” movement, while as of yet incoherent, intuitively “gets it”.  Both the movement’s slogan “We are the 99 percent” and its insistence on direct democracy are reactions against the oligarchic nature of our government.  Wall Street and income inequality are, however, just the primary symptoms of the problem; the real problem is our oligarchic government (the one percent can fairly easily control the two ten-thousandths of a percent that makes the rules).  This explains the rapid spread of the movement, and the morphing of the movement’s motive  from “Occupy Wall Street” to “Occupy Whatever”.  America is an oligarchy, and in oligarchies, as Plato noted in the Republic, there is not one state but two, one of the very wealthy, and one of everyone else (and for that reason, Plato argued, oligarchies are inherently weak).  A better (and more realistic) slogan for the “Occupy” movement might be “We are the 99.9998 percent”.

Our founding fathers were brilliant men, but they were brilliant men of their time.  When they professed that “all men are created equal”, they meant all white men of substance, not “men” in its Germanic sense of “people in general” – women and non-white men of any sort were, by assumption, excluded.   We reverence our Constitution for good reason, but our reverence has long since turned into idolatry.  The last several years have made it inescapably clear that we need to rethink how we govern ourselves.  Plato suggested in his Symposium that one of the best outcomes of an education would be thinking about constitutions, and in his Republic that the ideal outcome of an education would be individuals prepared to rule for the common good.  While I have suggested no alternative to our current constitution, I can think of no task more in tune with the mission of a liberating education.

Plutonomics, Citibank, and the Doom Cycle