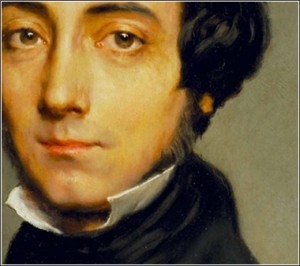 It doesn’t take an acquaintance with Tocqueville to spot the flaws in many American claims about equality. Just go to school. You soon learn that an A paper is not equal to a C paper. You also learn that those different grades will have a bearing on where you go to college. And at college you will learn the hierarchy of professors and the jealousies by which faculty guard their senior statuses. If you persist and go on to graduate school (and didn’t have grades to see the point of national rankings), you learn the differences between elite graduate programs and middle rung institutions. And if you hang on to finish a dissertation, you have already mastered the differences among university presses and will feel little gitty-up in your morning run if you have to settle for Penn State University Press after having shot for Princeton University Press or even the University of Pennsylvania Press.

In other words, the American academy, like every one of its peers and predecessors, is built upon hierarchies that should have taken down the American myth of equality at least 140 years ago when the research university set the pace for higher education and elevated the Ph.D. to its esteemed rank. But it did not.

Andrew Delbanco, who teaches at one of the nation’s elite institutions, Columbia University, wrote a column recently for the Times in which he added a bit of candor to some of the fictions that surround American higher education and surprisingly had a few kind words to say about a Republican candidate:

Consider the fact that SAT scores (a big factor in college admissions) correlate closely with family wealth. The total average SAT score of students from families earning more than $100,000 per year is more than 100 points higher than for students in the income range of $50,000 to $60,000. Or consider that a mere 3 percent of students in the top 150 colleges, as defined by The Chronicle of Higher Education, come from families in the bottom income quartile of American society. Only a very dogmatic Social Darwinist would conclude from these facts that intelligence closely tracks how much money one’s parents make. A better explanation is that students from affluent families have many advantages — test-prep tutors, high schools with good college counseling, parents with college savvy and so on.

Yet once the beneficiaries arrive at college, what do they learn about themselves? It’s a good bet that the dean or president will greet them with congratulations for being the best and brightest ever to walk through the gates. A few years ago, the critic and essayist William Deresiewicz, who went to Columbia and taught at Yale, wrote that his Ivy education taught him to believe that those who didn’t attend “an Ivy League or equivalent school” were “beneath” him. The writer Walter Kirn recalled that at Princeton he learned to “rise to almost every challenge … except, perhaps, the challenge of real self-knowledge.” In my experience, a great many students at top colleges are wonderful young people whose idealism matches their intelligence. Yet the charge that elite college culture encourages smugness and self-satisfaction contains, like Mr. Santorum’s outburst, a germ of truth.

Our oldest and most prestigious colleges are losing touch with the spirit in which they were founded. To the stringent Protestants who founded Harvard, Yale and Princeton, the mark of salvation was not high self-esteem but humbling awareness of one’s lowliness in the eyes of God. With such awareness came the recognition that those whom God favors are granted grace not for any worthiness of their own, but by God’s unmerited mercy — as a gift to be converted into working and living on behalf of others. That lesson should always be part of the curriculum.

In this respect, I agree with Mr. Santorum that our leading colleges could use a little more of their own old-time religion — not in any doctrinal sense, but in the sense of taking seriously the Christian virtues of humility and charity. In secular terms, this means recognizing that people with good prospects owe much to their good fortune — and to fellow citizens less fortunate than themselves.

(Thanks to John Fea)