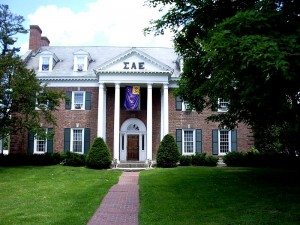 If you follow college “culture” at all, you’ll find little new or surprising in the recent discussions of the abusive hazing rituals at Dartmouth, or that the college and its alumni so cheerfully abandon any pretense of caring. Or that these malformed louts do so much harm when they move to the investment house and trading firms–these are bestial people we ought to pity.

In his essay, “The Body and the Earth,” Wendell Berry argues that “the question of human limits, of the proper definition and place of human beings . . . finally rests upon our attitude toward our biological existence, the life of the body in this world.” If we devalue the body but separate and elevate the mind, we cannot be surprised to find that we begin to dehumanize our own bodies first, then the bodies of others, and then the entire world.

Stories like those from Dartmouth indicate the wisdom of Berry’s claim.

When we reject our place, our reality as fellow-members of the created order, we soon “can become a fiend.” Sundering the full pattern of relations from each other, viewing things only in atomized chunks or units, we tend to overlook the Great Economy, the full linkages of things to each other. Not only does this tend to render our acts incoherent, as we do not see the for-the-sake-of which we act, thus acting without real reason, we also tend to cede authority and knowledge to those little “experts” and “specialists” of this or that atomized chunk of reality. (Alas, there would appear to be no community more devoted to this incoherence than the academy, and no discipline more mad than that of “education.”)

Divorced from the full pattern of relations, relationships cannot but seem random, incoherent, and increasingly competitive. Can there be any more evidence of the oddity of our time than what the Dartmouth story reveals about how we understand “fraternity”? Rather than brotherhood of shared affection and task, fraternity here seems to be nothing more than callous abuse of each other for the self-preservation and self-advancement made possible by this shared abuse. (These boys will end up rich and powerful, but unlikely to end as men.)

Berry articulates as a sign of health the household, for the household is a responsible means of ordering sexual energy, as well as the bodies and persons and relations sustained by the household. Rather than existing for our own isolation, we exist for household; further, household exists not for its own sake against other households, but rather as an exercise of creative fidelity for the whole, for the whole world.

And yet, in our institutions of cultural capital, we hear more and more of the worst things, of the worst sort of people doing the worst that can be imagined, and then the barbarians rule. As MacIntyre suggests, the vandals are not at the gates, they’ve been ruling us for quite some time now.

For the rest of us, those who are wounded but not yet entirely owned by barbarism, the task of creative fidelity remains. Of slowly, faithfully, restoring households and renewing topsoil, of recognizing membership and uniting the sundered, of integrating ourselves and our relations.

Culturally, it’s been a long Lent now, and perhaps we begin to yearn for resurrection, but this will be a slow Easter, I suspect, less dramatic busting forth and much more the lengthy restoring of fertility to blasted soil and rock. Now we think in centuries, not in programs.