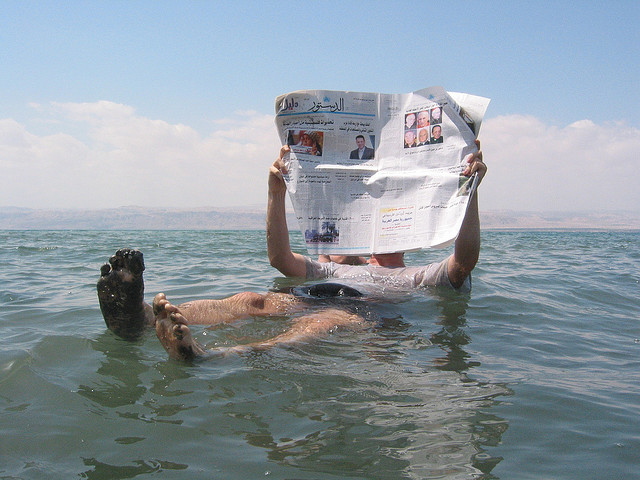 Louisville, KY. The other week my daughter brought in the newspaper, handed it to me and said, Golly, Mom, the Monday paper sure is thin.

Yes, I replied; Monday’s issue has always been the thinnest of the week.  But today is Tuesday.

The Courier-Journal hasn’t been much of a paper in recent years, and I sure am missing it as it goes.

On April 3 the CJ announced the early retirement of 26 employees, including 18 from the news staff. Among them is an excellent investigative reporter, the editor of the Metro section, a fine photographer, and the longtime head of the editorial page. I won’t miss everyone who is leaving, but I will miss most.

Of the 18 news jobs, only a “digital developer/producer”–I think he used to be the tech reporter–will be replaced. The copy desk is moving to Des Moines.

Tuesday’s announcement was on page 4 of the Metro section and unsigned, because why lead with bad news that’s your own, and why pretend a press release is a piece of reporting? The staff leaving were not named. You had to go to InsiderLouisville.com for that, a site which had posted the names of those leaving weeks ago, when the possibility of buyouts was first announced.

CJ interim publisher Randi Austin, a Gannett VP for human resources, had this to say: “While we are sorry to see these valuable and long-term employees leave, we are happy to be able to provide this voluntary opportunity to retire early.”

“We thank them for their dedicated service and wish each of them and their families all the best in the years ahead.”

If that seems pretty brief, remember that column space costs money. Why waste it on words of farewell?

And if it seems remarkable (as Terry Boyd at Insider Louisville observed) that Ms. Austin would not mention the awards and achievements of this group, that is probably because if she did, she would only be emphasizing the skills and experience the paper is losing.

You can tell me this is inevitable and that I’m hidebound to mourn an often infuriating and increasingly obsolete institution, but I will tell you that despite its past imperfections and recent pettiness I have remained a CJ susbscriber because I love the daily paper, both as it is and as it should be.

I never expected the CJ to be fully comprehensive or fair, but I like news, and I like an editorial eye even if it’s liberal and jaundiced. I like my news generated and edited locally, because while a local editor may be wrong he won’t be indifferent. I like the idea of grouping the day’s events into one big meal for a community’s edification, entertainment and outrage, and I like to know what’s happening in-state but outside my part of town. I can find international news other places, but I can’t easily replace the metro and statewide news the Courier used to have.

After this third round of staff cuts in four years, there are still a few good reporters left.  But they must be lonely.

To give you a small example of the coverage that isn’t: last year the city’s umbrella organization for arts fundraising, the Fund for the Arts, went through a scandal concerning its then-chairman. The paper reported at length and on the front page until the chairman finally retired.

This year, when the Fund’s new leader held a well-attended press conference to announce a program addressing one of the complaints raised during the scandal, most of the arts community was there, but the Courier was not. The paper has one arts reporter, and she was on another assignment, or out of town, or sick.

So what remains for local news, as the Courier whittles itself down the point of no return? Our local franchise of Business First (a print weekly) does a pretty good job of basic business news, but it is never controversial.  There are a few websites (the scrappier Insider Louisville site mentioned above, or the more sedate LouisvilleKy.com) which occasionally break stories and run news commentary and restaurant openings.

Reviews of theater, music, art and a few books can be found at Arts-Louisville.com (for which I write occasionally), a site which began as one blogger’s attempt to fill the silence after the Courier stopped reviewing all but the largest shows.

There’s LEO (“Louisville’s Eccentric Observer,” and it is), a free weekly founded years ago by the city’s current U.S. Rep. John Yarmuth, with cultural coverage and some politics.  Our NPR affiliate, WFPL, has hired four additional reporters in the past year to cover politics, environmental stories and more. They all sound young, but they are game and doing good work, such as Phillip M. Bailey’s memorable January 4 interview with Mayor Greg Fischer.

And then there are the TV stations—the best-funded media outlets of this list–which do basic coverage and the sensational, but don’t break many stories.

That means the reporting done outside the Courier is done on the cheap, and there’s not a lot of it. The various media attempting to fill the void left by the paper are fragmented, lightly staffed and can only partly cover even the limited areas they focus on. One of these days some website is bound to get the funding it needs to expand, if it’s blogger-in-chief can devise a business model that pays (or pays enough), but that hasn’t happened yet.

I don’t know what the profit margin is at the paper now, but one of the problems with Gannett is it demands—for its true audience, its investors—a high profit margin. Perhaps the Courier has never been profitable enough to suit Gannett. I do know there were a number of years when the paper made a decent profit but did not remotely make its numbers.

I wonder if print news is one of those businesses in which owners are going to have to forgo investor-grade profit margins in order to keep the necessary staff in place to create the “product.” News that is news and not infotainment may have to be a slow-economy, low-return business.

Sometimes I go to the library to look up old Courier stories from the fifties or sixties or seventies. Those pages are blissfully without color and black with ink; there’s just so much copy, by current standards. Now there’s not enough copy to justify a copy desk, and the Courier, which has been dying a death of a thousand cuts for several years now, is amputating limbs.

You can call that progress if you like. Me, I see a void, and maybe an opportunity. Or maybe just a void.

When Nothing But A Local Newspaper Will Do

The War On Raw Milk