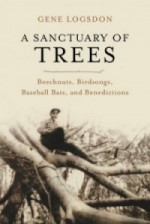 There arrived in yesterday’s mail an attractive book, new from Chelsea Green, titled A Sanctuary of Trees. A hand-written note from the director of communications, addressed to me, said “Gene asked me to send you a copy of his latest book.”

“Gene” is Gene Logsdon, a name well-known, I expect, to many denizens of the Front Porch. Gene belongs to that fraternity of older agrarian contrarians that includes, among others, Wendell Berry, Wes Jackson, David Kline, and the late Maury Telleen.

Gene Logsdon: the Contrary Farmer. His many books include The Contrary Farmer, Holy Shit: Managing Manure to Save Mankind, Homesteading: How to Find New Independence on the Land, The Mother of All Arts: Agrarianism and the Creative Impulse (reviewed here by yours truly), You Can Go Home Again, and three works of fiction: The Lords of Folly, The Last of the Husbandmen, and Pope Mary and the Church of Almighty Good Food, which is a book you can dislike only if you have a serious flaw in your character.

I had just enough time between mind-numbing meetings yesterday afternoon to leaf through A Sanctuary of Trees. The early pages have a good bit to say about Logsdon’s early mis-education: a preparatory school for boys who were seminary-bound, and then seminary.

But, as Shakespeare wrote, we sometimes “by indirections find directions out.”

“I made probably the stupidest decision of my life,” Logsdon writes, “only to have it turn out to be the smartest thing I ever did. I decided to listen to my teachers when they suggested that I should study to become a priest.” The reason he decided to do this, he goes on to say, is that “the high school prep-seminary … was situated on four hundred acres of woodland. My cousin Ed, who was my frequent companion in the woods, decided to go too. We thought about those four hundred acres and decided it might turn out to be fun to study for the priesthood.”

Confidence in this decision eroded some, thanks in large measure to clerical ignorance regarding mushrooms. Logsdon explains how he once found the mother lode of all morel patches and persuaded the cooks, German nuns, to fry them up in butter. “You can’t go wrong with anything fried in butter.” But the rector, who wasn’t raised in the woods, wanted to know why Logsdon was trying to poison everyone. Recurrence to the science teacher, who knew better, failed: “He merely mumbled that the first lesson of the priestly life was to obey orders.”

So, writes Logsdon, “from that day on, I started to doubt my decision to become a priest.” He had learned two important lessons: priests didn’t necessarily know as much as he did, and those who did know the truth might not necessarily “have the guts to stand up for it.”

But Logsdon continued his mis-education for many years, mainly because he was “almost always in close contact with the natural environment” he so loved. After the prep-school there was a novitiate year in Indiana, “mostly awful” but nonetheless sufferable, desirable even, because it played out near a “woodland … dotted with lakes.” Then came the seminary.

Now at this point in my quick perusal of A Sanctuary of Trees I realized that I had to run off to a meeting I knew would be hijacked by someone who can’t stay on task, but I also knew that the next part of the story was going to concern me somewhat indirectly, so I kept reading. (The thing about committees is that they get nothing done whether you’re on time for them or not.)

The seminary Logsdon attended stood along the banks of the Grand River in Michigan. And all the area surrounding it was farmland. Logsdon “became a river rat as well as a woods rat.” He and his hard-cider-making classmates “roamed the woodland … fished for walleye pike, hunted rabbits, and trapped for mink and muskrat.” One of their teachers, a priest, called them “the Sonuvabitchin’ Davy Crockett boys.” Logsdon “felt as free as the hawks that [he] could watch out the classroom windows, hanging high over the river.”

The seminary about which Logsdon writes was, and is, a large Tudor mansion situated on M-99 about fifteen or twenty miles southwest of Michigan’s capital city. But the mansion is no longer a seminary; it is a high-end restaurant and B&B called “Dusty’s English Inn.” It is patronized by people who (in Rumpole’s memorable phrase) are rich enough to afford very small portions of food.

I was talking to Logsdon on the phone a few years ago, and he was telling me about this seminary he attended in Michigan. “Where in Michigan?” I asked. He said, “you’ve never heard of it.” I said, “try me.” He said, “Eaton Rapids.” I said, “that’s my dad’s hometown. I’ve got uncles and cousins who still live there.”

Earlier in our conversation Logsdon had told me that in his seminary days he had been lonesome for his farm back home and that he used to canoe down the river, tie off, and walk among the cows on a nearby farm. So now I asked him whether he tied off on the left or the right side of the river. “Left,” he said. And I said, “that was probably my grandfather’s farm you were trespassing on!”

This was a phone conversation, so we couldn’t hold hands and sing “It’s a Small World After All,” but at that moment I felt as if it might be possible to shrink the world back to its proper size.

Not long after that I was in Michigan, traveling down M-99. I pulled off the highway and snapped a photograph of the Tudor mansion, which I later sent to Logsdon. He wrote back, his words throbbing with that exquisite pain we call nostalgia, which, of course, is also an intense kind of pleasure. He said he could remember the very spot on that property where he decided to be not a priest but a writer.

“The woodland sanctuary … saved me,” he writes in this new book. “It kept me sane … until I found myself, and then it convinced me to leave a life I was not fit for.” (Years later Wendell Berry would wryly understate the case to me: ‘it would seem that Gene’s parents singled out the wrong son for the priesthood.’)

And now here we have his twenty-second book, which I can’t wait to give my attention to. I think it will be the first book in the queue during finals week—before the avalanche of papers and blue books buries me.

And this is a propos of pretty much nothing save real places and the morels that sometimes grow in them, but, because we care about place here, and since I’ve mentioned morels, I’ll tell it anyway. One of my oldest friends lives in this same small Michigan town, and one of my favorite stories about him begins with his slicing a golf ball into the woods one day in late spring. (His swing resembles an octopus trying to put on panty-hose; the result of it is seldom pretty.) He trudged off into the bramble to look for the ball, as he often must, but he never found it. The Eagle Scout in him kicked in, and he came out of the woods toting not a Titleist but 110 morel mushrooms. Eaton Rapids is as fine a place to be in as to be from. (And it’s the only one on earth, as the signs at the city limits emphatically declare.)

Gene Logsdon is a frequent contributor to Farming magazine, edited by the aforementioned David Kline, an Amish farmer who, like Logsdon, also lives in Ohio. Subscription is not expensive, and what you read there is a damn site more valuable than most of what passes for news.

We owe something to these old agrarian contrarians; they deserve to have heirs worthy of the good work they’ve spent their lives doing. I daresay the Front Porch is a place (in the non-place sense of the word) where such heirs may be found. And it is well that we be worthy of our forebears.