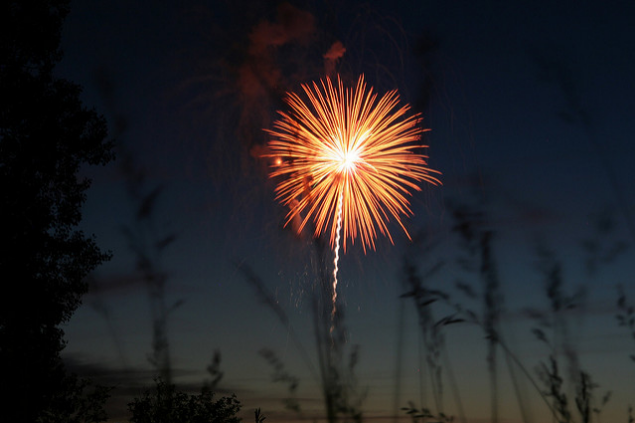 If you’re like me, holidays leave you feeling unusually contemplative, I suppose because the everyone-is-doing-it mentality awakens in us the long-slumbering cultural anthropologist. Holidays cause me to wonder why, exactly, we do what we do when we do it, whether ritual, rite, or well-rationalized obligation. Fourth of July fireworks are like that for me, putting the place-based agrarian in a profoundly confused, somewhat combustible place.

Mine was not a public fireworks display sort of family, it’s fair to say. In what would no doubt be considered a reversal of the rural stereotype, it was the women in my farm family who seemed most keen on driving the five miles or so into town to experience the noisy spectacle put on by our local fire department.

The men would hem and haw, dragging their feet at the prospect of going to town in the evening, which they almost never did, nor relished the prospect of. Going to town for anything other than a trip to the local Farm Service Agency, farm co-op, or implement dealership meant getting “cleaned up,” and getting “cleaned up” was a chore. If you were a church-going family, your rural neighbors might have seen you with that slicked-back, just-from-the-shower look, but that’s about it. Driving in for pyrotechnics meant letting the “townies” see you squeaky clean — an intimacy typically reserved for one’s family. Seeing a farmer freshly showered was a bit like pulling a dripping wet cat from the bathtub; you hardly recognized him.

Neither did the pigs-in-the-chute jockeying for space on the shoulder of the highway appeal to the men in my family. In fact, their (our?) whole lifestyle was built around an assiduous avoidance of exactly that kind of cheek-by-jowl craning for a view. Farmers and ranchers are people of unobstructed views, of wide-open vistas, and, as a rule, their vision is more grounded than skyward.

Much like shell-shocked soldiers may shy away, post deployment, from big guns and big blasts, a Middle American farmer spends his life amid a cacophony of noises intimating danger, and thus develops a sensitive ear, even if, paradoxically, hours on and around machinery have rendered him hard of hearing. As ironic as it may seem, the farmer ultimately seeks a condition of silence, in part because his is an inherently noisy world. Everything he does, or once did, anyway, in those days before air-conditioned, sound-reducing cabs on combines and tractors, involved the noise, at least, of an internal combustion engine guzzling gas. To drive four or five miles into town, packing yourself in amidst the well-lubricated, well-liquored townies shouting for more and bigger, was antithetical, in its way, to the farmers of my youth. If they wanted that kind of eardrum-splitting, thrill-seeking mayhem they might just as well have loaded the family up for a Metallica stadium concert.

The Middle American farmer-rancher, of course, bears a complicated relationship to the bombs-bursting-in-air aspect of Independence Day. As a class, we have given more of our blood and treasure to America’s many wars than any other single profession, for certain, and this despite a historically isolationist, even pacifist, bent. More than likely, the farmer knows someone killed or disfigured by a blast, explosion, or fire. On the farm, or at least on our farm, a gun was a thing to be used as a last resort — a specialized tool like any specialized tool to be used rarely and always with a particular purpose. Its use entailed no bragging, bombast or self-congratulation.

The patriot in me loves to join the chorus, but the rural agrarian in me, coupled with the fiscal conservative, cause me to stop and think. When the grand finale is done, and the last of the embers burn themselves out in the twilight sky stretched over the cornfield, I’m usually glad I went, if
only for the communion offered and for the shared celebration of our freedom. Then, on the way home, the lullaby of the gravel road inevitably returns me to that contemplative mood again, thinking of the oddities of our rituals—the ways in which we observe them, and expect others to do likewise, without at least wondering why we do them, what (and whose) interests they serve, and what alternatives there may be. The brain that looks for a better way to reach the same desirable end, the problem-solving brain, is, after all, the yeoman’s way.

Each year, after the fire department passes the hat for donations to cover the ever-increasing cost of the show they put on for our benefit, I wonder what else in our shared rural and small-town experience would draw so many hundreds out in their cars after dark — certainly not community theater, or a tractor pull, or even the Friday night lights of high school football in my family’s hometown of roughly 1000 souls. In a scene eerily reminiscent of the final climactic moment in the film Field of Dreams, our cars ease forward into the night, highbeams on again, locating the layered-up memories of better days buried beneath each Fourth of July the way others look for ghosts in cornfields. It turns out that not only if you build it, but if you blow it up, they will come.