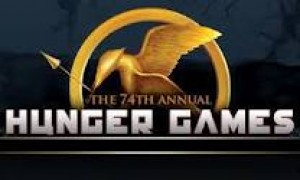 Spring grades are in, so it’s time for a bit of fiction. And since I’ve been hearing plenty of buzz about The Hunger Games by Suzanne Collins (now a major film), and since a neighbor girl left a copy on our steps after telling us how “amazing” it was, I thought I’d give it a try.

First things first. The writing is not good. My fourteen-year-old son read the first three pages and put it down grumbling about how he couldn’t stand the writing. He’s right. The author is fond of sentence fragments. Very fond. Too fond. This penchant gives the prose a chopped feel that is irritating. Off-putting. In fact a real distraction. See?

But it is not the quality of the writing that has driven the success of this book. It is the pacing and the plot. It’s a page turner that never lets up and the plot is so gruesome that it is difficult to turn away, even though several times I was tempted to abandon it in horror.

For those who are not familiar with the plot (and herein lies plenty of spoilers), the story is set in a future world where the United States, now the county of Panem, has been carved into twelve districts plus the Capitol. Nearly a century before the story takes place a rebellion against the Capitol was severely crushed and as a sort of perpetual reminder of the power of the Capitol and the relative powerlessness of the districts, the Hunger Games were instituted. Every year each district is compelled to select a boy and a girl between the ages of twelve and eighteen to compete in a game of survival to the death. The last one alive is declared the champion and enjoys a life of ease and plenty. The games are broadcast on live television and provide several weeks of riveting entertainment for the citizens of Panem. Consider it a mixture of Survivor, The Lord of the Flies, and The Most Dangerous Game.

The narrator, Katniss Everdeen, resides in district twelve, a poor coal mining district in Appalachia. When her little sister’s name is drawn for the games, Katniss volunteers to take her place. She is whisked off to the Capitol where she receives some training (although she already is an accomplished hunter who favors a bow and arrow). She is coached and primped and made ready for the televised events that introduce the various “tributes” to the viewing audience and then she and twenty-three others are placed in an outdoor arena to slaughter each other for the entertainment of the audience, which quickly grows bored if the action flags. And like Panem’s television audience, the reader is never treated to a dull moment as children plot to survive and kill in turn. What could be more entertaining?

The book is all about finding entertainment in watching the suffering of others. In a voyeuristic age where reality television is ubiquitous, where old stand-bys like Survivor are joined by the likes of Temptation Island and Jersey Shore, the author is tapping into something profoundly disturbing about our mass culture; although, in our case sex rather than violence seems to be the standard fare.

While the gladiatorial elements are not new, the intriguing and disturbing twist is that the combatants are children. This takes the dynamics of the arena to an entirely new level of decadence, and suggests one reason why this book has been so successful: no child is going to say “I’m bored” when reading this gripping tale. Like reality television, the book compels attention by the sheer audacity of its premise.

But while Collins taps into a powerful aspect of our contemporary culture and in so doing subjects it to a serious critique, in the end, she flinches. Katniss—along with her ally and love interest, Peeta Mellark—never kill an innocent competitor. To be sure, the possibility is constantly in the back of their minds, but when Katniss unleashes her arrow, it is an act of vengeance against a nameless male competitor who ruthlessly kills the wide-eyed child, Rue, and then only when attacked by terrifying and remorseless killers. The author manages to construct a situation in which the “enemies” are monstrous and lacking any humanity while Katniss, Peeta, and Rue are the “good ones” fighting for their lives. And while this makes possible a satisfying outcome where the “good ones” win the “game,” it seems disingenuous and indicates that the author simply can’t look with complete honesty at the world of horror she creates. In an honest telling, we would have sympathetic characters on each “side” where children like Katniss Everdeen and Peeta Mellark would be pitted against each other in an amoral world of carnage. The result would be unbearable. The fact that Collins manages to arrange the plot so that there are clearly good characters who manage to maintain their moral bearings—even to the point of self-sacrifice—brings the story into more or less conventional territory, yet she does so only at the expense of reducing some contestants to two-dimensional caricatures. This “weakness” in the author is hopeful evidence that she is simply better than the logic of her fictional world allows.

Ultimately, the book is a spectacle that is perfectly suited to translation to the big-screen, for it is there that spectacles only hinted at on the page can be realized in a way that can do justice to a book like The Hunger Games. I think I’ll skip the film.