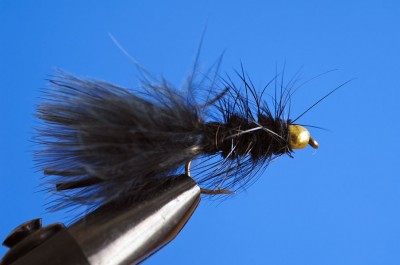 Finding myself 2000 miles from Montana but with a couple of boys who want to go fishing, we ventured into the brown waters of the Shenandoah River. This is, according to John Denver, “almost heaven.” He was, after all, singing about West Virginia, the Blue Ridge Mountains, and the Shenandoah River. I packed my fly rod and the boys brought their bait-casters.

The sun was sinking, the sky was clear, and slow-moving water tugged gently as we waded in. The boys started with some lures from a tackle box inherited from their grandfather who lived and fished in North Carolina: plugs, treble hooks, and fluorescent worms. Not a fly to be seen. They soon abandoned that tack when my youngest spotted the crayfish in the shallows. From then on they caught small crayfish, put them on their hooks, and threw the bait out to the fish.

With the boys set up, I threaded my line. Earlier in the day an older gentleman had told me that a Woolly Bugger would work in these waters, so I put a version of this classic onto my line. It had been tied by a guy manning a booth at a fish rodeo in the mountains of northern Georgia. Like the name suggests, it was big, black, and hairy. I tossed the line and stood watching the fly drift on the surface like a big black piece of fish food. I looked down. Standing thigh-deep, I could barely make out my feet. Certainly not the clear water I grew up around. But it wasn’t nearly as cold, either. And that cold, clear water was not here, but I was.

Bam! A fish hit my fly. My rod bent, my heart jumped, and then the fish jumped too. I brought him toward me, and he jumped again. It was a small-mouth bass. Not huge, but a good fighter and plenty fun to catch.

The moon rose early, while the western sky was still glowing. In the dusk, I glanced back toward shore. My youngest was on his hands and knees in the shallows stalking crayfish. Intent on his pursuit, he was happy and oblivious to anything beyond his present satisfaction. The moon reflecting on the water cast a pale yellow path along the dark river.

No, this isn’t Montana. But it is a good place nevertheless. Each place, I suppose, has a beauty all its own. But beauty requires eyes to see. It requires a willingness to submit to standards and conditions beyond my control or creation. Perhaps the good things of this world simply require the humility to see beyond my own expectations and my own demands.

It’s not easy to live fully in the present or fully in a particular place. Our lives tend to be split into many fragments, our attention bifurcated between a world of perpetual possibility and a world of concrete actuality. Yet it is only the latter where truly human lives are lived. The temptation is great to live in abstractions and possibilities, yet the crayfish are only caught in that particular pool, and the woolly bugger must be flipped into a particular eddy. And a boy’s excited voice when he sings out “I’ve got one” is precious to a Dad who needs constant reminding that the best things in life are right here, right now.

Thinking and Writing in ¾ Time: A Few Thoughts on Jimmy...