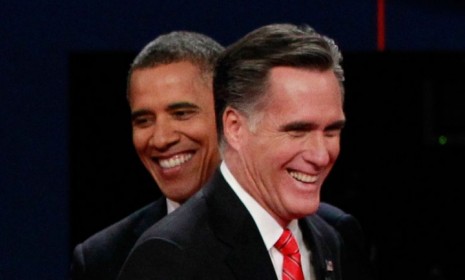 The blogosphere is filled with opinions on last night’s debate between the president and the challenger. The chattering classes has gotten a whole lot larger. Unless you are a historian and follow the posts at the History News Network, you probably didn’t see Leo Ribuffo’s reflections. A good friend who teaches history at George Washington University, is writing a biography of Jimmy Carter, and calls himself a McGovern Democrat, Leo is also wittily acerbic. Here is a good example (the rest is here):

Romney obviously won. The question is why. Quite possibly he won because he was channeling his inner Governor George Romney, a moderate Republican in the context of his era. In other words, having secured the Republican nomination, Mitt looked confident and relaxed because he was no longer confined to saying only things he didn’t believe. Perhaps if Romney is elected this inner George would prompt him to restrain the cultural conservatives and limited government zealots who dominate his party. I wouldn’t bet on it, but who knows? Lack of principle made Richard Nixon a better president for the welfare state than anyone expected.

Perhaps Obama lost the debate because he was having an off night. Or because he was over-confident. Or conversely, sensing the precariousness of his situation given the high level or unemployment, he channeled his inner Tom Dewey and decided to sit on his lead in the polls. Or perhaps, channeling his inner Michael Dukakis, he actually thinks a presidential election is about competence, not ideology. But I would speculate further that Obama had trouble mounting an effective and spirited defense of the welfare state because at heart he is a “new kind of Democrat” skeptical of government programs.

Whatever the reasons, Obama was lousy. Some pundits instantly attributed his abysmal performance to his “professorial” demeanor. This dopey short-hand has now become standard, akin to Jimmy Carter the engineer (wrong) and George W. Bush the “faith-based” president (even more wrong). Let’s abandon this cliché. Actual professors by definition hold jobs, which means that we had at least one successful job interview in which we looked people in the eye, explained our merits, and showed enthusiasm about our past work and future plans. Then, after being hired, we figured out how to adapt our complex and sometimes esoteric ideas to reach the audience at hand. As my old friend Warren Goldstein of the University of Hartford emailed me in mid-debate, “Most of us have to be 10 times better than that to keep 20 year olds awake in class.”

We’re Only Making Plans for Nigel