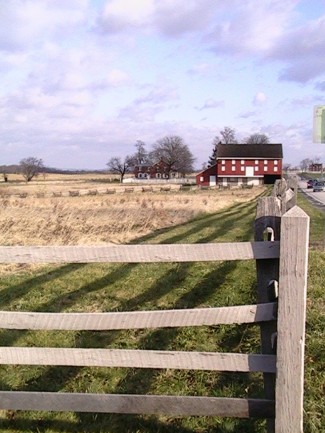 I was home in Bedford for spring break, mooching off Mom, Dad, and my grandmother, just like old times. My kids were at my wife’s parents. My wife and our dog stayed home. True, I got a lot less sleep during this stay than I used to a couple of decades back. And I had to lug along a satchel full of student papers to grade. But for a couple of days I was a lone son, spoiled by attention, much of it in the form of food.

My grandmother, age eighty-two, got up the first morning I was there and, pushing aside a distressing level of bodily hindrances, began to prepare herself for the day’s main event: the monthly potluck dinner of the Bedford Valley Senior Citizens. I could go as her special guest, she said, doubting I would accept the offer. It took me about five seconds to realize it was an offer I couldn’t refuse. Zelinsky’s Pennsylvania Culture Area (PCA) was beckoning.

After half a semester’s immersion in the history of Pennsylvania with a bright, inquisitive class of fifteen, mainly Pennsylvanians, this was just the field trip I was primed for. We’d learned about cultural landscapes, traced Indian-colonial relations, studied Civil War editorials, and read folklore from the Alleghenies. Zelinsky maintains that Pennsylvania is the locus of one of only three “major colonial culture hearths of the Atlantic Seaboard.” But unlike denizens of the other two hearths—southern New England and the South’s Chesapeake Bay region—Pennsylvanians, he says, “remain oddly oblivious to the particularity of their turf.”

I know them well. I number myself among them. I attended first and second grade in the (now closed) red brick schoolhouse less than a mile from the township building where we went for the potluck dinner. Later my family moved from the western part of the PCA to its eastern side, landing in Lancaster. For the past decade I’ve taught in Beaver Falls, in the Pennsylvanian west. I’ve long loved the state as a homeland. I just didn’t know much about it.

So I decided to take a break this semester from the big macro-themed courses I usually teach to think small, to feel small, to bring history into closer contact with place—my place. This dinner I was attending as both student and neighbor.

I dropped my parents and grandmother at the door, parked the car, and walked in to find my mom scurrying around helping to get food set out and my dad mixing it up with old friends. Voices boomed across five or six lines of narrow tables. After ten minutes or so a retired Methodist minister stood up to offer a blessing; my mom told me he and his wife drive in each month from Harrisburg—a two-hour drive— just for the dinner. Within a few minutes someone had brought a tray filled with food for my grandmother while others stood in line; a lady came by passing out homemade Easter candy.

I loved the meatloaf, which a man serving as treasurer had made— two pans worth. I couldn’t resist Grandma’s deviled eggs, and the chocolate cake with the cherry icing absolutely hit the spot. My dad was shouting the news of his recent retirement down the table to his cousin Shirley when the president, a gruff, beloved man, recently widowed, called the meeting to order. The minutes were carefully read. Happy birthdays were sung. All rose to pledge the flag. Bantering and badgering ensued on the financial state of the organization. (“So you want a big trip? Where do you think we’re gonna come up with the money?”)

About an hour in the entertainment was introduced:  Floyd and Roger, plucking and strumming guitars, both superb. They sang together and urged everyone to join in. Nearly everyone did, including me, childhood songs rushing back with a force as sweet as the voice of the lady behind me, who seemed to feel a particularly keen yearning for the peace in the valley one song promised. Some were longing to fly away, to be sure, while others, like my grandmother, were more peacefully present, living testaments of the virtue of life lived on the sunny side.

Toward the end I found myself staring out the window at the state flag, with its deep dark blue, its proud horses, its glittering gold. I know where I’m retiring, I had joked, the spread of homemade delicacies in view. But of course few of these friends and neighbors will be around then. Will my generation of Pennsylvanians have enough culture to keep this one going? Will this circle be unbroken?

Dr. Miller is Professor of History at Geneva College and author of Hope in a Scattering Time: A Life of Christopher Lasch.

Why Not King of France, Kentucky?