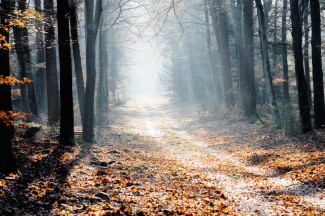 The following is an excerpt from a new book by Eric Miller: Glimpses of Another Land: Political Hopes, Spiritual Longings.

Of all the distinctive raiment with which Americans garb themselves, political hope is surely the most evident to anyone not American. We put it on without thinking. We seldom take it off. We have varieties for all weather. It is so natural to us we sense its absence as nakedness, disturbing degradation. We Americans are not defined by particular cultural practices or a distinctive landscape so much as by this insistent, encompassing hope.

As hope, ours is not always very impressive, which is to say it’s often specious. But its durability is remarkable. I was raised in an American Protestant tradition that has at its core an apocalyptic eschatology proclaiming the certain, imminent collapse of human civilization as we know it. In Sunday school classes, in sermons, and at what were called “prophecy conferences” we heard grand and awful pronouncements of an End that was already arriving. The child of missionaries, I recall as a teenager in the middle of South America listening to a recorded sermon by Hal Lindsey called “The 1980s: Countdown to Armageddon.” After hearing it at home I was impelled to take it to our little American school so the teacher could play it in Bible class. He did.1 This end-times, time-is-ending narrative suffused our thinking about the world. About everything.

Everything except the United States. Here, amazingly, hope, despite the encroaching desolation, pounded its rhythm deep into the night. Some managed to preserve hope for America by locating in Scripture an exception clause for the United States amidst civilization’s demise. But for most this native political hope was less self-conscious, less cerebral, and more instinctual. In America there is always the possibility that we can get things right, make things new. What else could America mean?

It’s no surprise at all, then, that as Hal Lindsey in the 1970s and 1980s was convincing millions of Americans that the end of the age was coming, many of those same Americans were lining up at the polls and at abortion rallies to “save the culture.” They were Christians. But they were American Christians. Which identity is more decisive? It is never easy to tell.

Hope being a theological virtue, it’s tricky to mount an argument against it. And perhaps that, in the end, is why American hope has steadily won out against more dour eschatologies (and clearly Protestant premillennialism is only one among many) that would stimulate other forms of response. We should hope: this we know.

This book is American in many ways, but perhaps most distinctively in its hopefulness. At the same time, it reflects an effort to be fundamentally and thoroughly Christian. This pairing of identities is, I’m suggesting, fraught. Christians know that not just any hope will do, whether American or any other kind. Hope is required of us but so is intelligence; our theology, in fact, insists that these belong together, that the absence of hope dims the intellect, that the absence of mind diminishes the virtue. Christian hoping must emerge from our deepest understanding of reality, our truest apprehension of being and time. And it must call into question and subordinate all other visions and intuitions of what is, and what is to come.

If Americans are born with the birthright of hope, the challenge for American Christians is to shape, hone, and direct it in such a way as to yield a smart, wise, and fruitful politics, a politics that seeks to make evident in any given sphere the unspeakable reality of God. Understood in this way, politics—whether on the scale of the nation, the township, the church, or the home—is simply the working out in our daily life of our deepest beliefs. It is the register of our fundamental moral impulses and intelligence. It is the evidence of what we think, of how we think, of whether we think. We are indeed political animals, as Aristotle averred. And nothing better shows how we understand the meaning of our circumstance and moment than the ways in which we as communities frame, order, and establish our lives together. We face no greater challenge than the challenge of politics. And maintaining intelligent political hope is the truest test we know of our character, mind, and vision.

The essays that follow are above all the fruit of a long, ongoing quest for this hopeful intelligence; it is indeed this questing that makes them essays in the first place. For me, the hoping has come easily enough; where to go with it has been the larger challenge. As I was listening to Hal Lindsey as a teenager in the early 1980s I was watching Ronald Reagan. The first term paper I wrote as a high-schooler in that little school for the children of missionaries was a biography of Alexander Haig, Reagan’s first Secretary of State. My friend Richie, another nascent political animal whose parents were Baptist missionaries from Kentucky, stoked my Young Republican enthusiasms; we recovered from the humiliation of the Nixon and Carter years by flaunting our American identity in a foreign land, cheering on the proud, kindly, confident leader whose enormous shadow covered Brazil and beyond. Preparing as a college freshman a little while later to cast my first vote, I witnessed Reagan in person at a rally just before the election and cheered until my lungs gave out. The cheering came from deep within.

But by 1992, eight years later, much was changing within me, catalyzed by the abrupt end of the Reagan years with the election of Bill Clinton and emerging from a surge toward spiritual and intellectual maturity that had begun a few years earlier. I was no longer a child, I knew; childish thinking—childish hoping—I had to push aside. A quest for a new politics, for a mature politics, was beginning. This is what deepening faith seemed to require: a set of convictions about what our common life, at all levels, should look like.

This book is a testament of this quest, affording glimpses of growth (I hope), struggle (I know), and at times (who’s to say?) vision. The social criticism herein is deeply enmeshed in personal odyssey—yet it is an odyssey that is, I believe, not simply personal. This story is not simply my own, as the stories of others have helped me to see.

The essays span a decade of crisis, from the disputed Gore-Bush election of 2000, through the shock of September 11, 2001 and the wars that have followed, to the economic meltdown of 2008 and our subsequent malaise. And this, of course, is just to mark time by the most obvious political events. The deeper dynamics of the decade, whether ecological, moral, or intellectual, reveal a vast multidimensional fracturing no amount of microfiber can mend. It’s this deeper historical moment that these essays above all seek to confront, and my focus is predominantly on it rather than on, for instance, federal policy or national politics. I’ve divided the essays into thematic sections: earth, politics, education, sport, and faith. But this is just a convenience. The thinking runs together; the vision is whole, or is an effort in that direction. The parts are parts, not apart.

This perception of fracture and longing for wholeness tips my hand and reveals, too, the play of generational change. In the fall of 2000, in my second year as a professor at Geneva College, I was teaching a course in the history of political thought. Early in the semester we read a 1999 Atlantic Monthly essay titled “A Politics for Generation X,” by Ted Halstead. Having, as usual, assigned it without having read it, I was especially delighted to find myself nodding vigorously throughout. At some point it occurred to me that all of my nodding was a sign of autobiographical discovery: the political journey I had been on was more of a collective pilgrimage than I had to that point been able to see. “America,” noted Halstead, “has some of the worst rates of child poverty, infant mortality, teen suicide, crime, family breakup, homelessness, and functional illiteracy in the developed world . . . many of our cities have turned into islands of despair, a frightening number of our public schools are dangerous, and almost two million of our residents are behind bars.” His conclusion was understated and, to me, quite evident: “Many Xers sense that the basic fabric of American society is somehow fraying.”

Halstead went on to describe the politics he saw emerging in my generational cohort as anchored by a “constellation of beliefs” that “transcends the existing left-right spectrum.” It included “Fiscal prudence, economic populism, social investment, campaign reform, shared sacrifice, and environmental conservation.” But what I had been feeling most acutely he articulated in his next line: “It should be immediately apparent that this generation’s voice is not represented by any of the established leaders or factions in the political mainstream.”

Indeed, what I had in those years been discovering was precisely the vital presence of leaders and voices beyond this mainstream, emerging from a complex and unfamiliar past, whose work promised illumination—and thus hope. Those who know the terrain will recognize, even anticipate, the influences—Wendell Berry, G. K. Chesterton, and Alasdair MacIntyre, among others. One of these influences in particular requires a further word. During the time most of these essays were written I was also working on a PhD dissertation on the American historian and social critic Christopher Lasch, which I eventually turned into a book. I had discovered Lasch shortly after the disorienting Clinton triumph, and after reading Lasch’s remarkable volume The True and Only Heaven: Progress and Its Critics, then just recently published, I found myself on the trail he was making, having, I now see, no idea at all how far it would take me or even where it would lead. Much of the thinking that shaped my biography of Lasch, Hope in a Scattering Time (2010), was worked out in these essays; many of Lasch’s ideas, and I suppose more generally his stance, have in turn molded me in ways I can hardly see, much less describe.

More than ten years after Halstead’s manifesto appeared, I’m not sure of the extent to which his predictions have held up. What I do know is that the problems he identified are ones that many in my generation, as well as many on either side of it, have felt deeply, and have experienced as an aching presence pervading all that we do, whether at church, at school, in the neighborhood, on the job, or in the home. For engaging this world and bringing healing to it, the politics of “left” and “right” are blunt instruments indeed. The judgment with which Lasch in 1991 began The True and Only Heaven has if anything more force today than it did two decades past: the “old political ideologies have exhausted their capacity either to explain events or to inspire men and women to constructive action.” In the face of our dark and difficult moment, these essays, many of them written in a confessional vein, are simply an effort to find light and to give it—the kind of light that, invariably, keeps hope alive.

1.  But did he agree with it? I don’t know. He was a very courteous and generous man.

Used by permission of Wipf and Stock Publishers (www.wipfandstock.com).

Eric Miller is Professor of History at Geneva College and author of Hope in a Scattering Time: A Life of Christopher Lasch.