Front Porch Republic
Home Articles Adam and Eve on the Porch: The Place of Majestic Man 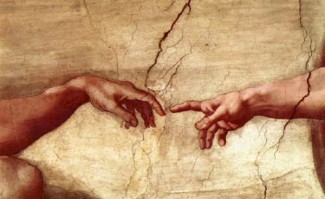 Lately I’ve had the privilege of working through The Lonely Man of Faith (1965) by Joseph Soloveitchik (1903-1993), an influential Orthodox rabbi with deep ties to Yeshiva University and a series of secondary schools in New England and the New York region. Lonely Man of Faith (LMOF) shares Soloveitchik’s “personal dilemma” and “concerns which weigh heavily” in his mind as a man of faith in the modern world.

The dilemma is simply stated—“I am lonely”—although he does not mean this in the sense of lacking friends of relationships. Rather, he is lonely because he “is a man of faith for whom to be means to believe, and who substituted ‘credo’ for ‘cogito’ in the time-honored Cartesian maxim.” He is lonely because he is a modern man, and yet a man of faith.

But in probing Scripture, particularly the distinct accounts of Adam in Genesis 1 and 2, Soloveitchik articulates a vision of the human which is deeply interesting and deeply relevant to modern man, although the tension precedes modernity; it is a tension of the human per se, and a tension intended and established by God.

In the first account of Genesis I, we are told of man’s creation in God’s own image, and a corresponding task to “be fruitful and multiply, and to fill the earth and subdue it, and have dominion.” In the second account, we are given the image of God forming man with His own hands from the dust of the earth, breathing life into the dirt, then placing man in the Garden to “serve it and to keep it.”

As Soloveitchik reads the text, Adam 1 reveals a creative being. “Man’s likeness  to God expresses itself in man’s striving and ability to become a creator,” including “functional and practical aspects … through which man is able to gain control of nature.” Adam 1 is not a philosopher or theologian, he does not asks questions of qualis, but is akin to the modern scientist who “has emerged victorious from … encounter with nature because it has sacrificed qualitative-metaphysical speculation for the sake of a functional duplication of reality.” Asking only “how it works,” Adam 1 does not ask “why it works” or “for what it works.” Adam 1 is motivated by “desire … to better his own position in relation to his environment … to harness and dominate the elemental natural forces and to put them at his disposal.” Adam 1 is majestic, for “the brutes existence is an undignified one because it is a helpless existence,” whereas the human is majestic in reclaiming himself “from coexistence with nature.”

Adam 2 wishes not to control but to understand “the living, ‘given’ world into which he has been cast.” He does not “mathematize phenomena” but “encounters the universe in all its colorfulness … and studies it with the naivete, awe, and admiration of the child.” He is receptive rather than domineering.

In terms of social relationships, Adam 1 was not created alone but is “a social being, gregarious, communicative … blessed with the gift of rhetoric.” Alone, Adam could not “display his dignity and majesty.” Adam 2 is lonely, for creation itself offers to companion with whom to communicate his life of reflection, and so was needed “a new kind of companionship.” Covenant, not just contract, and it is in covenant that Adam 2 finds himself and his purpose.

Key to the reading is that both Adams are intended by God, both Adams are “equally provoked by the mystery of Being,” both want to be human, and both strive to “be what God commanded them to be, namely, man.” To ignore or truncate one would be to ignore and truncate man.

We are, thus, in an intrinsic tension given our created nature, but the loneliness we encounter is “due to a manmade historical situation and is, hence, an unwholesome and frustrating experience.” That is, while in reality Adam 1 cannot attain majesty without the man of faith “contributing his share,” we find Adam 1 now claiming sovereignty not only in the material but also in the spiritual realm. That is, all is reduced to the sovereign power of Adam 1, who has dominated himself by identifying “himself with the total human personality … ignoring completely Adam the second.”

There’s more to this remarkable and rich little book, and especially more to be had on the place and understanding of religion, but for now I’m interested in the question of both. It’s quite easy to see how modernity severs Adam 1 from 2, and easy enough to see how modernity privileges the impulse of Adam 1 at the expense of the second—our economy, our self-understanding, our science, our conception of the good life all seem evidence of this. At the same time, it’s easy to see versions of Adam 2-type resistance and rebellion against Adam 1’s sovereignty—Occupy, some versions of environmentalism, some foodies, “small is beautiful,” some versions of localism. And while some versions of Adam 2-type resistance are more extreme, others less so, if we used this taxonomy it wouldn’t be much of a stretch to see the Porch as a voice of Adam 2.

Of great interest, it seems to me, would be understanding a proper balance between the Adams, of understanding the place due to each. Adam 1 sees the world not as something utterly sacrosanct and to be kept pristine in its mystery, but rather as something that could be improved. (Jonathan Sacks, for instance, claims that this perspective is central to Jewish thought and explains why Judaism is “surprisingly open to new technologies … in the form of genetic engineering, stem-cell research and therapeutic cloning.”)

It seems to me one of the great temptations intrinsic to a certain kind of conservative view (Red Tory, distributivist, Burkean, Porcher—take your pick and add some more, for I’m not trying to exhaust the list or make any argument through the terminology) is to respond to the unscrupulous Adam 1 by over-privileging Adam 2.  What is the role and place of Adam 1 on the Porch?

My own Christian faith leads me to believe that God does not intend humans to keep the garden pristine, or even to recover some prior purity, but rather to mow and rake and bake and cut and build and develop in keeping with an eschatological vision of the garden-city. Not the garden or the farm but the city with parks, that is our end, as I read it. (I can’t find the text just now, but doesn’t Berry shake his head in Unsettling at the environmentalist whose picture of idyllic nature never includes human artifacts?)

What place for Adam 1 amongst us? A good deal of our ability to preserve dignity of creation, human or otherwise, depends upon our ability to fully include our ability to alter, so much depends on us getting this right.