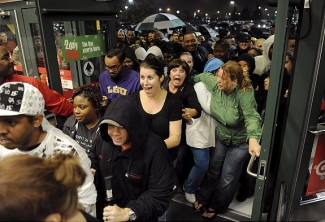 I woke up early last Friday morning, still in a slump from my post-Thanksgiving food-coma. Not too keen on the idea of braving an icy north wind just yet, I proceeded to turn on the local news before heading out for my morning run. My mistake.

The news anchors were dressed in what appeared to be their finest attempt at displaying gaudy, look-at-me-I-can-wear-Christmas-themed-clothing-now outfits. As I took a closer look, I realized they weren’t even reporting from their usual studio; in fact, they were attempting to articulate a newscast from just outside the front doors of a nearby Best Buy. Aha, I only almost forgot . . . Black Friday.

Their “breaking news” came in the form of interviewing a middle-aged woman who was caught leaving the store pushing not one, but two overflowing shopping carts filled with what appeared to be enough electronic hardware to rewire lower Manhattan. It was immediately apparent that she had consumed about 47 too many cups of coffee that morning, but she nonetheless managed a quote: “I love Black Friday. It’s all about supporting the economy!”

By this time, I had digested more than enough ‘news’ for my whole Thanksgiving break, so I decided it was time to brave the now-howling wind and set out for a run. I purposely left my iPod behind, as I’ve come to welcome the pseudo-silence that comes with venturing down a route that takes me past three houses. My mind, however, was anything but silent this morning, as I couldn’t help but attempt to articulate the way I had to come to regard Black Friday: the epitome of everything that is wrong with American culture.

To be honest, I was horrified by the shopper’s depiction of what our economy is, or rather what it has been reduced to. She seemed to be excited to support an economy predicated on private hedonism, something we should all find more than a little concerning. Every year, on the day after Thanksgiving, we embark on a journey to find the most efficient way to exploit the largest number of communities, laborers, and foreign countries possible, all in the pursuit of acquiring more socially-disembodying video games than our neighbors. And no, I don’t think that’s an excessive conceptualization.

This “economy” the shopper was referring to is one that the United States seems to have adopted in stride. We sell products with a single-minded goal, low price, and no labor law, trade agreement, or yet-to-be-determined environmental consequence will stand in our way. I don’t care what the unemployment rate is; this type of economy is not one worth embracing.

Here’s what I did on Black Friday. After lingering over a hearty breakfast, made possible by the chickens I saw out the back window, I hitched a brush chopper to our tractor and drove north about a mile to our neighbors’ Christmas tree farm. They were short on help for the season, we were the neighbors with a (working) tractor, and the objective was completely evident yet unimposing. Our job, clearing brush and grasses through picturesque rows of blue spruce, white pine, and Frasier fir, did not offer me one cent of monetary benefit.

It did, however, offer me a chance to work alongside an extraordinary role model, my father, who first taught me how to drive a tractor when I could barely walk. It offered the image of seeing the immense gratitude displayed on the faces of the family we helped. It gave me yet another opportunity to wear diesel fuel as my cologne. Quite frankly, I wouldn’t trade this for all the flat screen TVs in the world.

Wesley Rieth studies at Hope College in Holland, MI. He will graduate in May with a degree in Political Science and Environmental Studies.