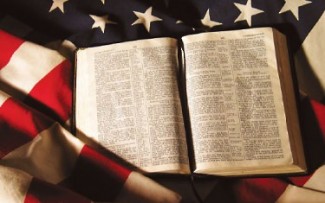 The splendid university where I’ve been privileged to spend the past semester proudly proclaims its commitment to “God, Country, Notre Dame” and means what it says.  If not identical, God’s purposes and America’s purposes are at least compatible and Notre Dame firmly supports both.

Mark me down as skeptical.  The older I get the more I’m inclined to see the melding of God and country as not such a good idea.  God can speak for himself, but I don’t think the merger serves the country’s interests.

My skepticism has nothing to do with Notre Dame, but with my own alma mater, West Point, where a cadet within a few months of graduation recently chose to resign in protest of what he sees as institutionalized religiosity. The First Amendment prohibits the establishment of a state religion. The United States Military Academy is certainly an organ of the state. Cadet Blake Page argues that authorities at West Point are promoting religion (especially evangelical Christianity), thereby violating his constitutional rights.  In a piece published in the Huffington Post and now circulating the web, Page explained the basis for his action.  The short article includes this excerpt from his letter of resignation:

I do not wish to be in any way associated with an institution which willfully disregards the Constitution of the United States of America by enforcing policies which run counter to the same. Examples of these policies include mandatory prayer, … awarding extra passes to Plebes who take part in religious retreats and chapel choirs, as well as informal policies such as the open disrespect of non-religious new cadets and incentivizing participation in religious activities through the chain of command.

Page’s accusations have stirred considerable brouhaha.  Among other things, Page himself has incurred the wrath of other cadets and recent graduates, who charge him with disloyalty.  After all, you’re not supposed to cast aspersions on your own school.  Some of the criticism is juvenile in the extreme.  An example, reprinted here in its entirety:  “Blake, I read your article. It sucked, get a better editor. You clearly don’t want to beat Navy, [signed] Chris, a grad.”

I regret that Cadet Page is resigning and would have advised him not to do so.  He is obviously a young man of integrity and conviction. For acting on principle, he deserves considerable respect.  And with his decision come consequences. Once Page leaves the Corps of Cadets, he’ll either be obliged to reimburse the government for the very considerable cost of his education or he’ll have to serve for several years in the army as an enlisted soldier. (If it’s any consolation, Blake, one of my own classmates made a similar decision even closer to our graduation—the issue was Vietnam rather than God—and eventually he became a very successful Hollywood scriptwriter. So life goes on.)

The case also has attracted the sympathetic attention of my friend Michael L. “Mikey” Weinstein.  Mikey is the founder and principal proprietor of the Military Religious Freedom Foundation.  Devoted to getting the United States military out of the business of religious proselytizing, the MRFF seeks to protect the rights of uniformed personnel (like Blake Page) who are not religious, along with the rights of those who may be religious but don’t cotton to anyone interfering with how they practice their faith.

I am speculating, of course, but Mikey may well be what God had in mind when he referred to the Israelites as a “stiff-necked people.”  I expect that God meant no disrespect to his Chosen People and I certainly intend none to Mikey. Yet he qualifies as one of the feistiest, toughest, and most pugnacious people I have ever met.  It’s impossible to imagine Mikey backing away from a fight that he thinks worth fighting.  Ranking near the top of what’s worth fighting for, in his view, is the Constitution of the United States, not least of all the First Amendment.  So Mikey is squarely in Blake Page’s corner.

Mikey got into this business when evidence surfaced that his alma mater, the United States Air Force Academy, had become a hotbed of Christian evangelicalism, with cadets who hadn’t yet found Jesus being pressured to get with the program.  Mikey was tipped off by an impeccable source—his own son, then a USAFA cadet, who was being pressured to convert, with academy authorities either actively complicit or turning a blind eye.  In getting Mikey riled up, USAFA and the Air Force made a very big mistake.  In what turned out to be the first of many fights, Mikey, who happens to be a very skillful lawyer, went after them hammer and tong.

Since then critics have attacked Mikey for being anti-religion or at least anti-Christian. That’s not my reading. He just wants religion to be a private matter. (I note in passing that the personal attacks against Mikey—typically by gutless cowards speaking from the anonymity of cyberspace—have been vile beyond belief.  I once fancied that anti-Semitism had gone the way of polio in our country. I now know that is not the case. The Jew haters are still out there.)

I differ from Mikey in being less doctrinaire on the issue immediately at hand.  After all, the military community does contain a large number of believers.  Some obligation to minister to the needs of soldier-believers—not all of them Christian, by any means—exists. Without being melodramatic about it, war accentuates those needs and that obligation.

As a believer myself who was once a soldier and who commanded soldiers, I would not want the dividing line between faith and military life to be too sharp. Let me concede that making religion available to soldiers while still respecting the non-establishment clause of the First Amendment poses a bit of a puzzle. So there has to be some sort of line, sufficiently visible for commanders to distinguish between what’s permissible and what’s not. In the past, the line was so blurry as to be indistinct. With some embarrassment, I can recall hosting “prayer breakfasts” at which attendance of subordinates was “expected” and therefore informally coerced.  What was I thinking? That said, we want to don’t chase away the chaplains.

Yet beyond the military realm, the ongoing debate that Mikey is promoting raises questions that call for especially serious reflection. It’s we believers who are not soldiers who ought to reflect. After all, when agents of the state promote religiosity, their primary interest is not necessarily saving souls. Throughout history, states have employed religion to advance their own purposes, which they routinely insist coincide with God’s own. Religion thereby becomes an adjunct of state power. Gott Mit Uns, as it were.

Whenever they have deemed it expedient to do so, U. S. political leaders have adhered to this practice. Especially in times of war or national emergency, they have unhesitatingly appropriated religion, enlisting God on America’s side.  To cite just one recent example, in the wake of 9/11, President George W. Bush, himself a believer, deployed God to provide a moral rationale for his Global War on Terrorism.

More often than not, American church leaders (to include the hierarchy of my own Catholic Church) have endorsed the proposition that America’s purposes align with the Almighty’s. When doing so, they validate the reassuring pairing of “God and Country,” as if implying a partnership of equals.  In fact, what all too often ensues is “Religion Subordinated to State,” an unequal and even exploitive arrangement that serves chiefly to facilitate the exercise of power unconstrained by moral considerations.

Mikey’s chief interest lies in ensuring that people like Blake Page can freely exercise their constitutional rights—a worthy cause. My chief interest differs. My argument is that it’s past time to recognize the problematic implications of this contrived (and to some extent cynical and corrupting) alliance between God and country.

Only by keeping the state at arm’s length can churches enjoy moral autonomy.  Only by guarding that autonomy can they assist citizen-congregants in reaching informed moral judgments on what the state is doing or proposes to do.  For a nation such as ours, where the state wields enormous power pursuant to vast ambitions, those moral judgments are of critical importance. They provide the ultimate check against vanity, arrogance, excess, and self-deception.

The point here is not for Notre Dame to revise its motto. Nor am I suggesting that believers should pit God against country. But they might assign to God a position that allows him to stand apart and speak for himself. Then perhaps we’ll hear him.

Andrew J. Bacevich is a visiting fellow at the Kroc Institute for International Peace Studies at the University of Notre Dame.  He wishes the Fighting Irish well when they play for the national football championship on January 7 and notes with regret that Navy has defeated Army in football every year for the past decade.