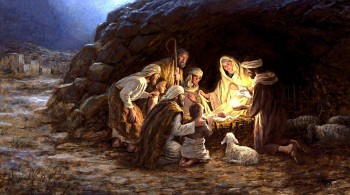 Hidden Springs, VA. In the days following the horrific events in Newtown, a theological debate has arisen, a debate that goes well beyond theoretical musings and gets to the heart of a profound issue: Where was God? It’s a reasonable question. If God is all-powerful and if He is a God of love, then why didn’t he stop Adam Lanza?

Mike Huckabee has weighed in. As has James Dobson. And Joseph Farah at World Net Daily. Huckabee suggested that this sort of thing isn’t surprising since we’ve systematically removed God from the public square, including banning prayer from public schools. Dobson claimed that the event in Newtown was an instance of God’s judgment for abortion and gay marriage. Farah suggested that this is simply the logical consequences of secularism and that we should expect more Sandy Hooks not fewer.

It is quite natural, in the wake of tragedy, to seek explanations. The horrific nature of evil is terrifying, and we seek explanations as a way of keeping it at bay. If we can explain it, we can deal with it, for what could be more intolerable than a world of unharnessed, untamed evil?

One way of coping with evil is to assert, like some have, that the act is a direct consequence of rejecting God or promoting a particular policy that offends Him. There are, of course, good reasons to believe that God, being just, punishes evil. It is, however, a more tenuous leap to claim that any particular event is an instance of God’s judgment.

Furthermore, the slaughter of innocents seems at least an elliptical sort of judgment. If God is going to punish the guilty, surely he could find someone more deserving than children. Were the innocents slaughtered in Bethlehem so many years ago an instance of God’s judgment? Or were they killed because of the fear and insecurity of a wicked king?

Looking for meaning–even if that is divine judgment–in tragedies is not unusual, but such activity carries the distinct possibility of claiming too much, for presuming to know the mind of God is a tenuous endeavor. Furthermore, it is easy to point a finger and say that a tragedy that doesn’t directly touch us is an instance of God’s judgment whereas it is less natural to point to suffering in our own lives and come to the same conclusion. We’re more inclined then to acknowledge that God makes the rain to fall on the just and the unjust. Why are we easier on ourselves?

In either case, however, there is a recognition that evil is somehow an instance of disorder. We know that things shouldn’t be this way. Something has gone wrong, but the remedy eludes us, so we attempt to explain. We pretend to know more than we know.

Yet the question remains: where was God? Why did He turn his back on those little children and their teachers on that horrible December day? This question is not new. One born around this time many years ago implored his father with the same agonizing query. “My God, my God, why have you forsaken me?” This was not a theoretical question, for this man dying a slow and agonizing death. He was being executed on a cross. And when he cried to heaven with the question that invariably comes when suffering is profound, God was silent.

Christ, the incarnate son of God, understands the mystery of suffering from the inside, if you will. He is no stranger to the agony of the human condition. During this Christmas season, when we celebrate the birth of a child even as we mourn the loss of twenty beautiful children and more, let us recall that the manger points to the cross. But the suffering of the cross was not the end of the story, for that tragedy was eclipsed by the miracle of the resurrection.

Immanuel. God with us.

Peace on Earth is our prayer.