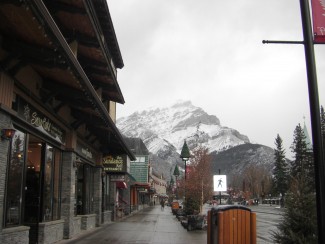 Over a drink with a fellow Canadian ex-pat about a month ago, I rather wistfully (and irresponsibly) indulged in some wishful thinking as I expressed my longing for the solid values of “peace, order, and good government” which had formed my imagination when young. Raised on the prairies, far from the cultural centres of Toronto and Montreal with their cultural upheavals, the (as I saw it then) very British virtues of stoicism, restraint, politeness, and modesty seemed to define the people and shape the human artifacts.

My maternal grandmother exemplified this, even though she was not British but a Swabian, one of those Germans who had fled Soviet persecution to live in sod houses on the Alberta-Saskatchewan border. One of her fellows, the “gallant little Lutheran from the Crimea,” Reynold Rapp, had resolutely opposed changing the flag from the Red Ensign to the Maple Leaf. Britishness was something to be supported by those who had lived under the Hammer and Sickle, he proclaimed.

More than bunting and ribbon, however, was the restraint, the modesty, the sense that your desires and wishes were perhaps not that important, while the needs of your neighbors and the community—both church and town—were paramount. One worked and strived to better oneself, of course, and my grandma once told me she moved from Saskatchewan to my hometown of Carbon, Alberta, because she heard there were prosperous young men there, but that meant not much more than stability, a modest home, a life of toil, and a quiet retirement consisting of gardening, coffee hour, and some road trips in the tent-trailer. Certain old-world trappings of “wealth,” perhaps, such as the purchase of a china set with accompanying crystal glasses, but these were ordered through the Hudson’s Bay catalogue and used frequently with family and friends to serve humble meals of roast beef, mashed potatoes, and home-canned peas. A quiet dignity was maintained, but ever so quiet.

The towns boasted very little. My little village proudly crowed that it had paved streets (!), a major accomplishment. There was also a curling rink, a pool (outdoor), a skating rink (also outdoor, whatever Canadian weather brought), ball fields (no lights, bleachers, or dugouts), and that was about it. Homes were small, unassuming, decorated with handicrafts, and certainly not modeled after Crate and Barrel. Those of the wealthy farmers were larger and better appointed, but the difference was slight, a matter of degree, and within a scale that did not offend or humiliate the less wealthy. That is, neighborliness governed, and the poorer friend could accept hospitality without being overwhelmed by the grandiosity of the McMansion, for the distance was not so great. And recall the smallness of the towns—you could not but associate with those from different economic conditions.

This was fitting given the character of the people. A picture of my paternal great-grandmother housed in the Glenbow Museum archives shows a family without much (she’s on the right), and not expecting much—stoic, dignified, resolved, modest. And while her children and grandchildren had more, they were of the same stuff—or so it seemed to me as a young man, or at least I consciously imagined it this way, whether it was true or not. Not too much should be expected, and certainly not much should be requested or demanded. 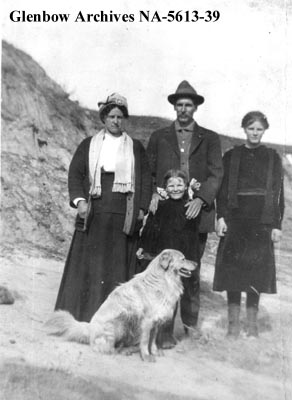 My drinking partner and fellow Canadian reminded me that this Canada no longer existed, if it ever really did; it had been done away by changing conceptions of rights after the Charter of Rights and Freedoms, by Americanization, by Trudeaumania, by the Reform Party, and so on and so forth. Perhaps restraint simply couldn’t withstand the prosperity of the last decades, and the markets did what they did.

I hoped he was wrong, knew he was not.

Having just returned from a two-week visit, I’m struck by the visible demise of modest restraint, particularly in the homes. Driving about the countryside, for this is what one does there, I saw many new homes of a preposterous scale, many thousands of square feet (one even had an outbuilding to house all the mechanicals), with multiple garrets and turrets, all jutting conspicuously from the fields and into my purview. They could not be hidden, nor were they meant to, and on the treeless flatness were visible for great distances.

Right beside them, sometimes just across the road, stood the old farmhouse, diminutive, overshadowed. In the towns, a kind of segregation had taken place, with the older neighborhoods a mix of homes smaller or larger (but of a kind), but new developments on the far side of town housing looming monstrosities dwarfing the older places.

This was not neighborly. This was not modest. This was a thumbing of the nose at those with less, a demand to be noticed, seen.  Roger Scruton writes of the bad manners of much contemporary architecture compared with older patterns, saying:

The principal concern of the architects was to fit in to an existing urban fabric, to achieve local symmetry within the context of a historically given settlement. No greater aesthetic catastrophe has struck our cities—European just as much as American—than the modernist idea that a building should stand out from its surroundings, to become a declaration of its own originality. As much as the home, cities depend upon good manners; and good manners require the modest accommodation to neighbors rather than the arrogant assertion of apartness.

Modesty is not prudishness, it is (1) having a moderate estimate of one’s merits and importance, (2) a freedom from extravagance, (3) a regard for decency or decorum. It is, then, fundamentally opposed to vulgarity and boorishness. And all around I observed (or thought I did) a change in character from modesty to vulgarity, and among Canadians, thought to be among the most mannerly people.

A family member in the construction business told me that when young couples come in to plan the homes, she often tells them to list absolute musts from relative wants, but reports being told several times that “whatever there is, is a need.” Moreover, not just a need, a demand, a right.

At the same time as the palaces multiply, the civic centres collapse. The town halls, source of community life—dances, movies, card parties, club meetings—were unpainted, poorly maintained, and not updated. Schools and churches were closing at rapid pace, businesses shuttered, main streets deserted as the homes became opulent, appointed, odes to entertainment. I’ll admit to some distress at how shabby the towns had become, even as the homes became incredible.

Perhaps new money corrupts even more absolutely than power, but modesty is in retreat and vulgarity extends—and hope remains. One little church I attended eschewed the innovations and the grandiose odes to self, continuing with the liturgy which called all to bow and pray in unison, not standing apart, not claiming merit for oneself beyond the due, not violating the decency of humility before the One. Perhaps that is enough.