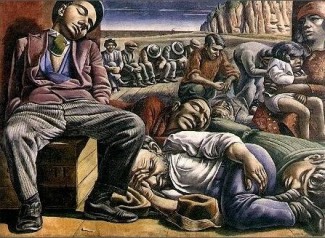 Marbledale, Ct. I was travelling back from a meeting in the Hudson Valley when the news of the Newtown Rampage reached me. The shell-shocked radio disc jockey tearfully announced the terrible news that several children had been murdered at a local elementary school and that surrounding schools were in lockdown and police were on the scene. Sandy Hook School is about a twenty-minute ride over hills and across the legendary Housatonic River from my home. Although my own kids have grown up, my town’s schools were on lock down and I was concerned for friends. These folks are my neighbors. A bloody terror was afoot in these old woods.

Newtown, Connecticut is a lovely town of wooded rolling hills whose proudest monument is a gigantic flagpole with a huge Old Glory flying aloft at its principle crossroads. A white-spired Congregational Church stands near the flagpole and the classic architecture of other denominations adorns nearby plots. Historic homes from across the eras adorn the Main Street. The Town Hall, a short turn right from the flagpole and next to a General Store possesses a fine theatre playing movies for families at a discount. A long-preserved “Sheep Fold” meadow lies along a left turn from the flagpole, a testament to the current people’s appreciation of their farming forebears. This is a quietly proud Yankee Town of people living their lives under their own control and of their own volition, vouchsafed in this effort by everlastingly supportive neighbors. Families make this town what it is, an embrace of love within the comfort of community. It is an evocation of that social contract so often hypothesized yet so little lived by people who have not had the good fortune of residing in either Newtown or her brethren across the small town landscape of New England, or any other small town in America for that matter.

Academics often speak of the virtues of small town America, but these people of New England live it without ever having to think about what it is because they simply do not have to classify it. It is their life, unadorned. This is a region of familiarity and immediacy, the corrugated hills tend to reinforce the notion that we live within a larger world but that the world at the foot of our enveloping hills is the most important treasure we possess. To be a resident of New England, you are a resident of your town first and foremost, then perhaps your county, an ephemera of abstract lines at best and then your State, a nettlesome yet cheerfully accepted obligation. We tolerate the Federal Edifice because we helped to whelp it and the notion of a “Shining City on the Hill” was born here. Home Rule and Town Meetings are our finest political attribute. There is nothing like the special thrill of a few hundred town residents assembling at a Town Meeting to tell the State it will get bupkis and having this voice or hand vote sanctified by law. Even though we export more Federal tax money than we receive by a significant amount,often times going to precisely those states who moan the loudest about Federal control, we are of the foundational colonies and proudly so.There is a sturdy security in this presumption. This is bedrock country.We’ll get over the fact that it took this Congress and Executive too many months to come to our aid after Hurricane Sandy. We abide. Our rocky landscape imbues fortitude. We take care of our own.

However, on the morning of December 14, 2012, the wretched calamity of a vicious madness breached this calm satisfaction. Evil paid a wretchedly murderous visit. The most innocent were the first to pay the price.

My first thoughts were for Newtown friends and associates although against this concern was a deeply penetrating concern about what kind of culture places its children in the secure and nurturing environment of a school only to surrender them to the whims of a mad man.

At times like these, we must finally admit that we live within a profoundly confusing era of self-destruction, violence, heedless avarice and worst of all, profound insecurity buttressed by an interminable indifference. All the advance of civilization, all of the vaunted security of law and human decency cannot protect our most innocent citizens. Babies, sitting at school desks can be machine-gunned on a tortured whim. If this is not bottom, I do not know what bottom might be.

A profound and prevailing horror and gloom descended upon these Berkshire foothills not unlike those ancient days when Deerfield, Massachusetts was attacked and her people carried off as war booty or tomahawked in the snow. The circle of violence is sturdily unbroken. Tragedy appears to be the glue that unites the ages.

And then, from our civilized precincts, Le Grand Guignol began. But this was no mere naturalist theatre. By nightfall on the day of the mass murder, every media conglomerate in the country had laid a heavy footprint down at the tiny crossroads of Sandy Hook, by the mills a mile or so from the Flagpole. Klieg Lights, cameras, reporters and all of the assorted accouterments of the modern media spectacle descended upon Newtown and we engaged in a programmed interlude of mass empathy, spiced by the piquant issue of gun control.

About a week into what had become a media spectacle, I took care of business in a neighboring town and then followed back roads into the heart of the tragedy, drawn inexorably into the spectacle. It was no problem getting there over less travelled  roads but upon arriving, all bets were off. License plates from across the northeast were all around, Pennsylvania, New York, New Jersey, Massachusetts, Maine…..their headlights and tail-lights illuminated the tracery of gridlocked roads in all directions like a kind of Christmas lights. The illuminated tumult of media glared, monuments of donated Christmas trees and stuffed animals adorned every intersection. We were all aghast as well we should be. People wanted to touch the scene of horror to actually convince them that while this kind of madness is our culture’s spawn, better spirits will prevail. While paying respects, people wanted to rub shoulders with others who know this horror is not right. But then, about a week into it, the charms of National Communalism wore off for the besieged residents of Newtown. The spectacle, as it always does in modernity, began to subsume the realities of life and the people most aggrieved by the tragedy were abused by a long distance orgy of denatured empathy. The fact that we talk about violence will not make it go away.

Twenty 5-7 year old children, six educators, only one older than forty, the shooter’s mother and the confused shooter himself, twenty seven people dead in a path of wanton destruction. This destruction was blazed across the madness of a culture which has turned away from love because the absence of it pays better.

Meanwhile, the political-media burlesque begins to report newspapers publishing gun-owners addresses on the one hand or gun clubs threatening to publish newspaper editor’s addresses on the other. We arrogantly pretend to debate the meaning of the Second Amendment over the bodies of twenty bright-faced babies and their brave teachers. Every political hack within a wide sniff of the Washington Beltway slacks their thirst on this abominable tragedy for their own benefit and still, no one questions the profound rot that lies at the base of our gnawing culture of want against a backdrop of reduced opportunity.

Personally, I’d swallow a spirited defense of the second amendment if this whipsawed regime of twittering imbeciles was a culture worth saving. The Security apparatus entrenching itself and the very notion of Federally mandated security drones aloft over domestic skies arouses suspicions behind the gun control debate. To add insult, the maneuverings of the Fiscal Cliff debate coupled with the unrepentantly preening behavior of Washington in general sickens me. Our culture’s violence has come home to roost.The surest route to riches is engaging one’s self in something prohibited or enriched by loopholes in the law. Ethics obviously went out with the Fiscal Crisis. We look, finally to not be able to hold onto the Republic as Ben Franklin suggested. No amount of legislation will stave off the eventual destruction of a culture that has forsaken love because simpler entertainments are easier.

This is my tribute to the beautiful babies of Newtown. My America is an America of Love. It is time to make Love stronger than hate because hate seems now to be winning. For Emilie Parker, whose Father bravely counseled forgiveness, for the jazzman’s little treat Ana M. Marquez-Greene, for all the little urchins of Sandy Hook school and their brave young teachers who protected their charges, it is time we begin to pursue Love with the strength and vigor of urges we now so blithely surrender to hate and inchoate want. This is not a debate about the lack of gun control as much as it is a debate about the absence of love within a culture that continues to witness the slaughtering of innocents as though it were some kind of remote reality show.

Unfortunately, it will be business as usual in Foggy Bottom, collateral damages seem to be simply a line item in its deficit spending budget of special interests. Gun control legislation might likely result in but another perversion reprising Prohibition, enriching precisely those who we find most repugnant.

To the Sandy Hook 27, I profess Love and Love only, I will not sunder your memory with legislative opportunity. Love, and love alone is the only effective ammunition firing back against the madness visited upon us.

The people of Newtown, in their grief, hold this in abundance.Your giant flagpole, at half-mast is our touchstone.