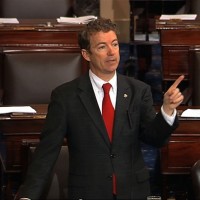 Senator Rand Paul’s filibuster of the nomination of John Brennan to be head of the CIA–something that he did in order to “draw attention to deep concern on both sides of the political aisle about the administration’s use of unmanned aerial drones in its fight against terrorists and whether the government would ever use them in the United States”–came to an end just after midnight on Thursday. I disagree with probably over 3/4’s of everything Paul claims to believe: I think his libertarian ideology is fundamentally flawed, I think this reading of American Constitutional history his deeply misinformed, and I think his distrust of the federal government is grounded more in paranoia and (whether he realizes it or not) a fetishization of property and states rights than anything chastened or wise. All that being said, Paul was the wise person in the U.S. Senate last night, and as someone who ends up (while often holding his nose) voting for far more Democrats that Republicans, I found it outright embarrassing that, aside from a couple of brief supporting comments from Democratic Senators Ron Wyden and Dick Durbin, Paul’s only allies all yesterday afternoon and evening were on the Republican side of the aisle, and rather marginal and dim Republicans at that (seriously…Mike Lee?). So many strong Democrats that were attentive to and tried to protest against the civil rights abuses inherent in the Patriot Act and the Bush administration’s expansion of the government’s war-making powers sat on their hands. Supporting one’s own President (or America’s quasi-imperial foreign policy agenda) trumps all, I guess.

But I suppose that isn’t actually surprising, because supporting the nominees of one’s President, and trusting in the technological and legal enabling of our expansive War-on-Terror global apparatus is just business as usual for both Republican and Democratic members of the political class, is it not? The Senate is a ridiculously dysfunctional institution, one which regularly defaults in favor of the business-friendly establishment, but when all is said and done it knows what it wants, and the whole reason Paul went through with this old-school, grand-standing filibuster (which basically never happens any more) was in part because the “majority seemed unfazed by giving up the day to Paul’s filibuster“; Brennan’s nomination, in other words, like the administration’s continued reliance upon drones, is basically already in the bag. And much of the news coming out of Afghanistan is moderately positive these days; isn’t it likely that a good deal of that increase in security is the result of the Obama administration’s aggressive waging of a nearly cost-free (for American soldiers, that is), drone war–made possible thanks to highly invasive, high-tech intelligence operations, of course–in the mountains of Pakistan? Who wants to get in the way of a war which is, at long last, both winding down and coming up with defensible results? And besides, isn’t it simply a given that the President of the United States ought to be able to wield these kind of powers? The Constitution explicitly gives the president broad power defend the United States in the face of all sorts of “insurrections” and “conspiracies,” doesn’t it? (Well, actually, maybe that was the Insurrection Act which does that…or maybe it was the 2007 amendments to the Act…of course those amendments were later repealed…and anyway, there’s the strict guidelines of the War Powers Resolution over there, the actual law of the land, but drones are perhaps not actually “armed forces,” as specified in the law, so we can probably just continue to ignore it, as every president, both Democrat and Republican, has since it was passed over Nixon’s veto.)

In the end, no doubt Senator Lindsey Graham spoke correctly–the only people who are worried about Obama’s use of drone warfare and terrorist-assassination, which is clearly only an extension of Bush’s prior building up of the president’s war-making power, are libertarians and the left. Well, actually, no, let’s that amend statement a bit–localists are opposed to it too. But we know who aren’t: liberals.

By liberals, I’m not talking about the Democratic party, or any particular subset of it. I’m not talking about those often referred to as “progressives,” since their concerns about civil liberties and economic justice are ones I’m often in sympathy with. No, I’m talking about all the folks who, because they prioritize individual rights in the usual juridical way, basically are primarily concerned about making sure that the economic-freedom-and-equal-rights-protecting modern liberal technological order keeps operating smoothly. As was famously noted by Alasdair MacIntyre, “contemporary debates within modern political systems are almost exclusively between conservative liberals, liberal liberals, and radical liberals.” Democrats and Republicans alike–indeed, pretty much the entire mainstream of political opinion in the United States, it sometimes seems–fits under this label. Some want more money spent here, some want less money taxed there, but they all are basically in agreement upon the same project: a powerful and opportunity-guaranteeing and well-defended state, which will pragmatically take care of all the messy business of maintaining one’s wealth and position in a diverse and dangerous world…without bothering too much with requiring the citizens themselves to take charge. This utilitarianism, and its consequent reliance upon technology and the marketplace and bureaucracy, has been part of the American order from the beginning, despite the dissident voices ranging from the Anti-Federalists in the 18th century, the Populists in the 19th, and the New Left in the 20th. By this standard of measurement, the demand which Senator Paul was making of President Obama and Attorney General Eric Holder–that they put in writing their commitment to never make use of the immense and deadly power which drone technology makes available to the President either against an American citizen or U.S. soil, at least not with the formal due process of law–was really a bridge to far. Drone warfare is working, after all! Don’t you want the liberal (and by now, quasi-imperial) American project to work?

Well, I can speak for the left, sort of: no, not necessarily, not any more than we automatically want any state project to work, not when it is as susceptible as America’s has been to the un-equalizing economic forces of globalized capital and the corporate marketplace. Drone warfare is just one more element in a depersonalizing and thus profoundly undemocratic process, which takes more and more equalizing authority away from the people or their representatives and puts it in the hands of those in power–and, thus, those economic agents who profit most from writing the rules of the democratic game so as to keep them there. I can, perhaps, speak for localists too, though there my cred is probably somewhat less: no, again not necessarily, not at least if the project in question is implicitly a centralizing and cosmopolitan one, making use of political authority to wage wars (and greater or lesser cost, in both lives and money) in distant lands for ideological (or corporate-driven economic) causes, obliging the economies and the family patterns and the social norms of communities to be subservient to priorities which they had no real part in choosing.

And the libertarians? I confess my suspicions there. There are, to be sure, many thoughtful people who associate themselves with that label, and do so in ways which focus on exactly the sort community-destroying, democracy-undermining government and business collaboration and centralization which localists and leftists generally oppose. But I look at Senator Paul, and it seems to me that, on the basis of what he’s gone on the record saying before, that his is the unfortunately too-common neo-Confederate style of libertarianism, where the central issue is not so much democracy or even civil liberties but rather my rights–that is, keeping other people away from my stuff, my rights, my property, at all costs. That’s no way to organize a decent society, in my opinion. Part of me suspects that Rand Paul-style libertarianism might be perfectly okay with drone warfare, even he was assured that the only folks that would ever be taken out by the president would be Hugo-Chavez-style strongmen who threaten America’s influence over oil markets.

But that’s probably unfair. The fact of the matter is, whatever the true nature(s) of the Tea Party movement which help put him in the Senate, Rand Paul yesterday stood up for a principle that I think needs standing up for–and if the libertarian argument motivated him to say something which any good leftist reader of The Nation or any good localist reader of Front Porch Republic would agree with, good for him. Drone technology, like nearly any technology–as thinkers from Wendell Berry to George Grant to Martin Heidegger have taught us–has the ability to distract us, to mask the real world from us, to everything (even human lives) into tools and checkboxes on a list. Philosophical liberals, generally speaking, just don’t see this, because their notion of individuality depends, to a great extent, on just always making maximum use of the best, most cost-effective, most efficient, least demanding tools possible. That’s a sad reality, and not one easy to change (especially since most us, working on our laptops and living lives in which terrorist cells and the mountains of Pakistan are fortunately just abstract notions, really kind of like tools which enable us to not bother with such things). Senator Paul didn’t change any of that yesterday, but he made it clear that he was someone–whether he realized it or not (my guess is he doesn’t, at least not fully)–who was willing to contemplate, via putting down some absolute limits on the president, some real change in the way things are supposed work in the liberal order to day. May his tribe (well, actually, not really, but still: the tribe of differently-thinking people who agree with him on this crucial point) increase.

Walker Percy and the Recovery of Place