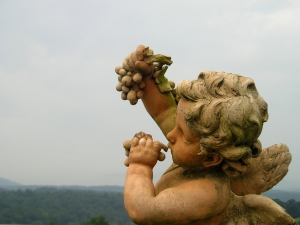 Hillsdale, Michigan. Perhaps it is a function of having been reared by two alums of Bob Jones University — where, let’s be clear, I did NOT go — but I continue to be amazed by the modern West’s nonchalance about sex. The Mrs. and I recently watched a pretty awful Australian movie, Love Serenade (1996) in which a disk jockey, who moves to an Australian backwater, proceeds to philander the two single women living next door (who happen to be sisters), and ends with the women getting revenge by arranging for the DJ’s death and the disposal of the body. (If I spoiled the movie, consider yourself blessed.) Maybe other movies have a little more romance, character development, and better plots, but casual sex is pretty much par for the course. No worries about sexual performance (though radio advertisements on sports stations suggest enough men suffer from dysfunction for physicians to specialize in performance issues). Also, these movies show almost no concern with STDs (only Whit Stilman’s Last Days of Disco (1998) comes to mind as the exception that proves the rule). Some of my bewilderment may stem from a resentment that during my youth finding outlets for raging hormones was not as easy as Hollywood says. Still, the casual way in which our culture portrays sex is at least odd if not a tad disproportionate for one of the most intimate, vulnerable, and procreative aspects of human existence.

The acceptance of liberationist sex (libertarianism of an older variety is better than this) is so widespread that we protect a woman’s right to choose in the consequences of sex but refuse the same woman the right to govern her body when she chooses to smoke in public spaces. In other words, we have gone a little crazy about sex and the results are not pretty.

For instance, the possibility of sex outside marriage and without offspring has created the phenomenon that Judith Shulevitz wrote about for the New Republic relatively recently. A first-time mother at the age of 37 thanks to the assistance of fertility physicians and technology, Shulevitz saw a side of American society that she and most of us have not considered:

My baby boy seemed perfect. When he was three, though, the pediatrician told me that he had a fine-motor delay; I was skeptical, but after a while began to notice him struggling to grasp pencils and tie his shoes. An investigator from the local board of education confirmed that my son needed occupational therapy. This, I discovered, was another little culture, with its own mystifying vocabulary. My son was diagnosed with a mild case of “sensory-integration disorder,” a condition with symptoms that overlapped with less medical terms like “excitable” and “sensitive.”

Sitting on child-sized chairs outside the little gyms in which he exercised an upper body deemed to have poor muscle tone, I realized that here was a subculture of a subculture: that of mothers who spend hours a week getting services for developmentally challenged children. It seemed to me that an unusually large proportion of these women were older, although I didn’t know whether to make anything of that or dismiss it as the effect of living just outside a city—New York—where many women establish themselves in their professions before they have children.

I also spent those 50-minute sessions wondering: What if my son’s individual experience, meaningless from a statistical point of view, hinted at a collective problem? As my children grew and, happily, thrived (I managed to have my daughter by natural means), I kept meeting children of friends and acquaintances, all roughly my age, who had Asperger’s, autism, obsessive-compulsive disorder, attention-deficit disorder, sensory-integration disorder. Curious as to whether there were more developmental disabilities than there used to be, I looked it up and found that, according to the Centers for Disease Control, learning problems, attention-deficit disorders, autism and related disorders, and developmental delays increased about 17 percent between 1997 and 2008. One in six American children was reported as having a developmental disability between 2006 and 2008. That’s about 1.8 million more children than a decade earlier.

Soon, I learned that medical researchers, sociologists, and demographers were more worried about the proliferation of older parents than my friends and I were. They talked to me at length about a vicious cycle of declining fertility, especially in the industrialized world, and also about the damage caused by assisted-reproductive technologies (ART) that are commonly used on people past their peak childbearing years. This past May, an article in the New England Journal of Medicine found that 8.3 percent of children born with the help of ART had defects, whereas, of those born without it, only 5.8 percent had defects.

On the other side of the spectrum are those mothers who don’t want to be. Another story in the New Republic describes the plight of a woman, Jennie Linn McCormack, facing charges for a Do-It-Yourself abortion thanks to the wonders of drugs such as Cytotec and Mifeprex. Ada Calhoun, the reporter, is generally trying to show the dangers of restricting abortions in places like Idaho. But she also does a pretty good job of showing a dark side of sex when she describes the actual circumstances confronting a 17-year old who desires to be rid of an unwanted pregnancy (hide the women and children):

McCormack knew that an abortion would cost $400 to $2,000, depending on how far along she was. Utah has a mandatory waiting period of 72 hours, which meant she would either need to stay in a hotel for that time, or make the six-hour round trip twice over the course of several days. She couldn’t come up with that kind of money. So she called her older sister, who owned a computer, and asked her to order abortion pills for her on the Internet. The pills cost $200, and McCormack says the logistics of arranging it all took about two months.

By the time the medication arrived in an unmarked envelope on December 23, she was in her second trimester—at, she thought, week 14. Following the instructions, she took the first pill right away and the others some hours later. That night, she started having cramps. The next morning, Christmas Eve, she delivered a dead fetus alone in her bathroom, along with the placenta and a great deal of blood.

The fetus was much bigger than she had expected. It was about a foot long, clearly female, with identifiable features and hair. McCormack wrapped the remains in a bag with the placenta. Then she put it in a box and hid it under her bed. That evening, she attended Christmas Eve dinner at her father’s place and dropped her daughter off with her ex-husband for an overnight visit. She wrapped the children’s presents, including new clothes she’d bought on layaway for her fashion-conscious daughter, and put them under the tree. She told no one about the abortion apart from her sister.

After about a week, the box began to emit an odor. McCormack wrapped it up in more bags and put it out on the back porch, on the shelf of a covered barbecue. It didn’t feel right to her to throw it away. A week or so later, unable to figure out what to do, she finally confided in a friend. He called his sister, and his sister called the police.

On the afternoon of January 9, 2011, two officers arrived at McCormack’s house. She led them to the back porch and told them, according to reports, “My baby is in the box.” When an officer opened the parcel, he discovered the fetal remains, partially decomposed and frozen. One officer took McCormack to the police station, where she described the abortion. An autopsy would later determine that she had actually been between 19 and 23 weeks—around five months—pregnant.

Say what you will about the sanctity of human life and the plight of mother’s who have unwanted pregnancies, the world of Jennie McCormack cannot be one that pro-choice advocates promote as wholesome and decent. If pro-lifers need to face up conceivably to a world where women might need to resort to back-alley abortions, it would be worthwhile for pro-choicers to acknowledge the world that they have helped create. And yet, nowhere do we see restraint, modesty, and chastity as plausible responses to our society’s infatuation with sex.

Nor do we see much attention to the kind of social obligations that have historically come with sex and reproduction. Though we do see it occasionally. Christopher Shannon recently conducted a lively debate at the U.S. Intellectual History blog over Robert O. Self’s book, All In the Family: The Realignment of American Democracy Since the 1960s. I would encourage FroPo’s to take a look at Chris’ posts as well as his thorough responses to a host of interlocutors, all carried on in a remarkably civil manner. But one of Chris’ points is well worth repeating here:

As late as 1972 or so, Ted Kennedy opposed abortion because he thought it betrayed the social justice concerns of the Democratic Party. Now, a significant portion of our population, probably a slim majority, no longer longer see as an obligation a basic human activity once viewed as natural and obligatory: carrying an unborn child to term. I am arguing that this represents a historical thinning out of our sense of obligations and duties to each other. Self is shocked by this thinning out when it comes in the guise of right-wing libertarians rejecting the welfare state, but gives it a free ride when it comes to sex. Libertarians do not think that the poor have the rights and command the obligations that supporters of the welfare state believe they do. I think these two political positions have fed off each other and combined to create a political culture with a weakened sense of social obligation. This ideological conjuncture on freedom from obligation seems to me to explain the past forty years better than Self’s Manichean struggle of progressives vs. reactionaries.

Watching these discussions play out in a context of debates about gun control has been doubly odd because many of the same people who rightly see the folly of certain gun laws fail to notice that open access to procreation may be as socially dangerous as a similar availability to guns (please, no puns about shooting blanks). After the shootings in Newtown, the editor of the local paper in our old Philadelphia neighborhood wrote, “semi-automatic weapons really have no place in a safe and civilized society.” I’m all for safety and civilization. I simply wish that we could put sex in the calculation of what makes for a safe and civilized society. It may not mean doing background checks on people before they obtain a license to engage in sex. But is ignoring the side effects of promiscuity any better than the National Rifle Association’s often wooden defense of the Second Amendment?

One Lawyer, No Money, Plenty of Guns