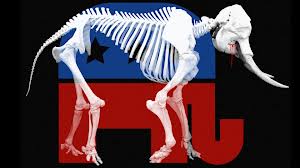 Hidden Springs Lane. It is clear that the GOP is in disarray. The recent CPAC conference only served to highlight that the Republicans are bereft of ideas. Railing against “big government” and championing a bellicose foreign policy have proven both ineffective and contradictory and for good reason: small government at home and an empire abroad are mutually exclusive. The insistence that party leaders toe a strict line of orthodoxy or risk being ostracized (witness the Chuck Hagel confirmation) suggests a level of brittleness that is disheartening. Why anyone still listens to John McCain, Lindsey Graham, Grover Norquist, or Bill Kristol is a mystery.

Demographically the party caters to an aging population. The fact that entry into the party leadership requires one to genuflect at the altar of Ronald Reagan indicates a complete failure of political imagination. Reagan was elected more than thirty years ago. While his name still warms the heart of cold warriors, he means little to anyone under thirty-five. Reagan himself would surely look askance at this reverence and suggest that political leaders today need to consider how 2013 is different than 1980 and creatively seek to apply conservative principles to new and continually changing circumstances.

A question that is rarely asked but should be painfully obvious is this: why do self-identified conservatives seem so uninterested in conserving ? To ask the question is to put a finger on a tender spot right at the heart of the problem.

To be sure, some conservatives might point out that they are interested in conserving traditional marriage or American hegemony or perhaps some abstract notion of freedom. But even when these things are named, the language and the disposition is less about conserving and more about fighting. “We’re going to fight for family values” is not the same as doing the hard work to cultivate good things so they can be preserved.

In short, the language of conserving—of stewardship—is foreign to many conservatives. Thus, we have a significant group of people who call themselves conservatives but who have lost the inclination (as well as the practice) of conserving. Recovering this disposition is a key component to revitalizing American conservatism. Here are several specific suggestions.

1. Reclaim the language of stewardship. Years ago the right ceded concern for the environment to the left and anyone who expressed serious  concern for preserving the natural world was deemed suspicious. Conservatives should be leaders in conserving natural resources, natural places, and the flora and fauna therein. Chanting “drill, baby, drill” suggests an appalling disregard for the natural world and a petulant demand for a way of life that is not sustainable.

2. Stewardship must extend beyond the environment to include the preservation of culture, communities, and institutions. We have inherited many good things from prior generations who sacrificed much on our behalf. Part of stewarding an inheritance is to pass it on intact, and perhaps even improved, to the next generation. Stewardship, then, requires attentiveness to the past even as it conscientiously prepares for the future. Stewards think in terms of generations yet unborn even as they care for things handed down from people long dead. In this light, our national debt represents a colossal failure of stewardship, for it is literally taking resources from our descendants to satisfy our current desires.

3. Effective stewardship of a place or an institution requires that we learn to speak in terms of proper scale, for individual actions as well as policies are effective only to the extent that we can properly comprehend problems in concrete terms. In this light, it is no surprise that railing against the abstraction of “big government” has proven ineffective. Reagan was wrong. Government, per se, is not the problem. The trouble is institutions that have exceeded a scale that is suited to human flourishing. To be sure, a bloated, centralized government is a problem, but so too is the centralization of economic power. Conservatives need to see how the two pathologies are connected and deal with both simultaneously. If they do not, their efforts will continue to be futile.

4. Politically, conservatives must champion a recovery of federalism, which has been so badly damaged in recent decades. Socially and culturally, conservatives should explicitly reorient themselves toward local communities. In recent years there has been a renewed interest in local culture, local food, local democracy, and local economies. However, these sensibilities have found far more traction on the left than the right. In fact, many so-called conservatives denigrate these things as crunchy, hippie, lefty nonsense. This represents a serious failure to grasp how conservatism is necessarily tied to the local and that the resurgence of localism presents conservatives with a tremendous opportunity.

If self-professed conservatives learn to speak and act in terms of stewardship and human scale, they will find a constituency that is young, vibrant, and profoundly conservative.

George F. Will and the Decline of the Tory