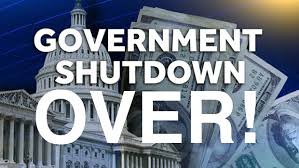 Hidden Springs Lane. The great shutdown charade (less than 50% of workers furloughed) is over for now. However, though our leaders are patting themselves on the back for ending the stalemate and avoiding the uncertainty of default, they have only kicked the problem down the road a few months. How’s that for wise leadership? I fear that we can’t expect much more. It seems we have entered into a strange new phase in our political history where governing by crisis is the new normal and the looming threat of financial ruin is never far away. We shouldn’t be surprised. The sheer size of our problems is quickly moving beyond the capacity of our leaders to fix.

First, James Madison understood that power naturally tends to expand. Power, he said, is of an acquisitive nature. Power that is not growing is power that is actively checked by another power. The natural course of power is to attempt to eradicate competitors and consolidate all prerogatives to itself. In recognition of this reality, Madison argued that the separation of the three departments of the national government would serve to keep power from consolidating. Each department would have the incentive and the means to resist the inevitable attempts at encroachment by the others.

Unfortunately, this mechanism has not been impervious to the natural tendency of power. Where Madison imagined the powers delegated by the Constitution as static—that the pie was of a limited and specific size—we have seen that over the years the pie itself has grown dramatically: the Congress, the Executive, and the Supreme Court have all substantially increased their powers. So, too, has the power of the national government grown relative to the states. In many instances this has occurred through the funding mechanism of the national government whereby states have been required to conform to federal mandates in order to keep the money flowing. The temptation has proven too great and the states have relinquished their duty to stand guard against the encroachment of federal power.

In short, power has predictably done what power naturally does, and today we see the effects of more than two centuries of centralization.

Second, our Founders debated at length on the appropriate size of a republic. Anti-federalists, following “the celebrated Montesquieu,” argued that a republic must be small and that the thirteen American colonies with three million citizens was simply too large. You could have a small republic or a large empire, but a large republic was simply impossible. In reply, Madison argued that an extended republic would inhibit the formation of majority factions that could destroy the republic. One wonders if Madison, himself, would have thought that a republic stretching from Atlantic to Pacific and containing over three-hundred million would have exceeded the upper limits.

The question of scale is one that is rarely asked today, but it may be the essential neglected political issue of our time. It is clear that the problem of power and the problem of scale blend into each other in important ways. As the natural tendency of power worked itself toward greater consolidation and as the nation grew in both land and population, a corollary was the growing demand for government to do more. Power naturally fills any social vacuums and even helps to create them. The growth in the size of the republic and the growth in the power of the state led to a national government with constantly proliferating agencies, obligations, and duties. (We even have a number of “czars”, a term that would send a chill through any of the founding generation). These agencies have, through administrative law, become largely independent purveyors of regulations imposed upon the population. Due to the incredible size and complexity of the national government, the jurisdictions of many of these agencies overlap and their goals run at odds with each other (for example).

We hear calls for government reform aimed at making the federal government more efficient or less redundant, but it is so large now and so complex and beholden to so many special interests that there is virtually no possibility that matters can be scaled back intelligently for the simple reason that no one is intelligent enough to master the complexities of this behemoth.

Every rational person knows that our sixteen trillion dollar debt is not going to be repaid. And Congress has agreed to raise the ceiling on this national shame allowing us to continue spending more than we have. But this cannot continue forever. The future liabilities  associated with Social Security and Medicare dwarf our current debt and no one knows what to do except rail about the crisis and then raise the debt limit at the last minute. This crisis is a two-headed hydra, for defaulting on the debt would be serious, but waiting for the whole house of cards to collapse might be even worse. And our public servants appear bereft of ideas and simply resigned to riding the wave of debt as long as possible.

It seems clear that a decentralized, human scaled polity is our future, but we may have to learn some hard lessons before we get there: some people still see centralization and giantism as solutions rather than the problems. The significant matter that remains in our control is whether we start working to bring this future into focus through modest, piecemeal attempts at reform (the states can play an important role here) or whether we are compelled by our own collective hubris to this same future. While both paths will be painful, the latter will surely hurt worse than the former. Citizens should not expect much of Congress or the President. We can, however, begin now to form local communities and ways of living that can weather the transition to the smaller future that is on the way.