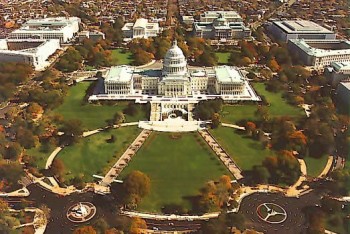 What words best describe present-day Washington politics?  The commonplace answer, endlessly repeated by politicians themselves and media observers alike, is this:  dysfunction, gridlock, partisanship, and incivility.  Yet here’s a far more accurate term:  tacit consensus.  Where Republicans and Democrats disagree, however loudly, matters less than where their views align.  Differences entertain.  Yet like-mindedness, even if unacknowledged, determines both action and inaction.

In the Bill W. Obama era, a neoliberal consensus defines American politics.  In his classic text The American Political Tradition, the historian Richard Hofstadter identified the parameters of that consensus.  It emphasizes, he wrote, “the rights of property, the philosophy of economic individualism, [and] the value of competition.”  It assumes “the natural evolution of self-interest and self-assertion … into a beneficent social order. ”  Grab and get ultimately works for the larger benefit of all.  That, at least, is the idea.

Of course, when Hofstadter published these observations way back in 1948, his subject was not the neoliberalism of our day but an earlier variant — the progressivism that had shaped the American political agenda during the first decades of the twentieth century.  During the era bookended by the two Roosevelts, Theodore and Franklin, progressives had sought – successfully — to preserve corporate capitalism by curbing its excesses.  Attacked by their critics as radicals, TR and FDR were in fact anything but.

By 1948, Hofstadter was worried that progressivism had become a spent force, leaving Americans “bereft of a coherent and plausible body of beliefs.”  In fact, a revised, more assertive brand of liberalism was already gathering strength.  While this new Cold War liberalism differed from pre-World War II progressivism in some respects, protecting the “free enterprise” system remained a top priority.  With perceived threats to that system now coming primarily from abroad, exercising global leadership, backed by ample military muscle, now became one of liberalism’s abiding signatures.  This modified consensus, superseding progressivism, dominated the American political scene for several decades during the latter half of the twentieth century.

Although the Cold War has long since ended, this emphasis on an expansive, militarized foreign policy persists.  If there’s a fresh element in today’s neoliberal consensus, it’s found in the realm of culture.  As neoliberals see it, received norms related to family, gender, and sexuality ought to be optional.  What Hofstadter in his time described as a “democracy in cupidity rather than a democracy of fraternity” has become in our day a democracy combining cupidity with individual autonomy at the expense of fraternity and self-restraint, all backed by the world’s most powerful, widely deployed, and busily employed military establishment.

Are the troops in Afghanistan fighting for our freedom?  If so, the package of things they fight for includes the prerogative of dispatching U. S. forces to wherever it pleases Washington to send them, along with no-fault divorce, abortion on demand, gay marriage, and an economic system that manifestly privileges the interests of the affluent at the expense of those hard-pressed to make ends meet.  To pretend otherwise, indulging in some sanitized or cliché-laced definition of freedom, is to engage in willful self-deception.

To imply that all Americans subscribe to this neoliberal consensus would be misleading, of course.  A loosely-organized antiwar movement objects, however ineffectually, to Washington’s penchant for military adventurism.  Moral traditionalists protest against the casting off of social conventions, again without discernible impact on policy.  Risking the charge of engaging in class warfare, groups such as the Occupy Wall Street movement raise a ruckus about the yawning gap between the rich and everyone else.  Again, the effects of their efforts appear negligible.

As far as their practical impact is concerned, these dissenters might as well be locked in a soundproof booth.  They shout, but are not heard.  Hofstadter had anticipated their predicament.  “The range of ideas … which practical politicians can conveniently believe in,” he observed, “is normally limited by the climate of opinion that sustains their culture.”

Here we come to the heart of the matter:  the climate of opinion.  Only politicians who possess an aptitude for interpreting the prevailing climate will succeed in gaining and holding high office.  In the political sphere, ideas at variance with that climate are by definition inconvenient.  Expedience dictates that they should be ignored.

Whether the precepts informing basic U. S. policy today actually work as advertised – whether the neoliberal consensus keeps us safe, liberates us from archaic and repressive attitudes, and creates conditions conducive to broad prosperity or whether they foster needless wars, moral confusion, and social injustice is an interesting question.  That the question deserves more attention than it presently receives is undoubtedly the case.  What cannot be argued, however, is that those precepts depart in any significant way from what the prevailing climate of opinion demands.

Andrew J. Bacevich is professor of history and international relations at Boston University.