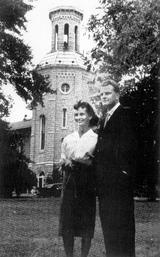 The responses to Conn provided one glimpse of what makes evangelical colleges tick. Defenders responded that evangelical colleges provided the kind of academic freedom that secular or public universities could not, namely, places where scholars were free to consider their own disciplines in the light of Christian teaching and practice.

Later this summer another window opened on the evangelical academy. Gordon College president, Michael Lindsay, co-signed a letter with other evangelical leaders (do I need to add “servant”) to ask the Obama administration for an exemption from an executive order forbiding federal contractors from discriminating against gays, bi-sexuals, and transgender persons. I was not sure how many federal contracts a school like Gordon might have. But in the era of faith-based initiatives, you never know.

This incident turned out to be revealing because of the way the letter to Obama stressed the service that evangelical institutions provide for the common good:

Our identity as individuals is based first and foremost in our faith, and religious beliefs are at the foundation of some of America’s greatest charities and service organizations that do incredible good for our nation and for the world. In fact, serving the common good is one of the highest expressions of one’s religious liberty outside of worship. The hiring policies of these organizations—Christians, Jewish, Muslim and others—extend from their religious beliefs and values: the same values that motivate them to serve their neighbors in the first place.

For those familiar with the long history of Roman Catholic objections to American public schools, this is an arresting twist. Roman Catholics used to argue that parochial schools served the common good by educating students in the same subjects that public schools provided except that they did it under the auspices of the church and its teachings. Protestants were unmoved and viewed parochial schools as sectarian. Protestant insistence on the separation of church and state, in fact, was the kind of logic that eventually led the Supreme Court to disentangle not only any public support to parochial schools for buses or school books but also to rule prayer and Bible reading in public schools as unconstitutional. In contending that Wheaton College should not be accredited, Peter Conn may have merely been echoing a view of religiously informed education that Protestants and the Courts had well established.

Whether Protestants wound up shooting themselves in the foot by construing church-state relations in such a potentially damaging way, the curious aspect of this letter is that evangelicals now find themselves having to justify their institutions in ways that Roman Catholic bishops in the United States used to employ — we are religious but this is the basis for serving the common good.

Now put this together with some other recent estimates of the evangelical academy. One comes from Robert Tracy McKenzie at Wheaton College who describes the work of a Christian scholar in — let’s be frank — a rather parochial way. He quotes former Wheaton president, Duane Litfin:

I am highly motivated to be about the business of cultivating our minds and our learning, but it seems to me that our first motives must be intrinsic rather than instrumental. In other words, we must learn to love God with our minds, to use our artistic gifts for Christ, to embody him in serving our neighbor and our society. But our primary motive for doing so must not be the transformation of our culture. Our prime motive must be obedience to Jesus Christ. Then, if the living Christ graciously chooses to use our efforts to mold our culture into more of what he wants it to be, we will be grateful. On the other hand, if he does not so choose–and let us be clear about it, he does not always so choose–and the culture remains resistant, even hostile, to our Christian influence, we must not be cast down. Our motivation is not dependent on the acceptance and approval of our culture; in the end we care preeminently about the approval of Jesus Christ. Our goal is to love God with our minds, whether the culture comes to appreciate our efforts or not.

To be clear, I am not singling McKenzie out. This is standard fare in the halls of the evangelical academy, the idea that all learning — the integration of faith and learning no less — is teaming with implications for Christian faculty and their students. That may be, but then how common a mission does this give the evangelical historian, for instance? If I as an evangelical college professor am trying to figure out God’s designs for planet earth in the U.S. 1828 presidential election, how am I sharing a common enterprise with the gal who teaches Jacksonian America across town at Prairie State University? One could possibly say that both scholars are covering the same material and that the Christian scholar simply adds Christian value to the subject — maybe at the end of class, perhaps at the conclusion of the semester. But if evangelical colleges are going to say that the Christian faith affects everything — as born-again Protestants are fond of saying about everything from aerobics to urban planning — then how much do they share in common with other educators?

Richard Mouw, the former president of Fuller Seminary, felt precisely this tension and decided favorably that evangelical academics are now even more self-consciously Christian than those at Jesuit universities. In response to a question about why evangelicals can’t employ some non-evangelicals at their seminaries or colleges, Mouw replied:

Just before I finished my studies at the University of Chicago to join the Philosophy faculty at Calvin College, I received a letter from a veteran professor at Calvin, an accomplished scholar in “middle English” literature. Welcoming me to the Calvin faculty, he also wrote that I was making an important commitment in this assignment. “Many of us can be at other places, at excellent secular schools,” he said. “But we are at Calvin because we have taken special vows—it is sort of like becoming a monk”—but he added, “without the celibacy!” He went on: “To teach at this school is to respond to a special calling—to take this community, this theological tradition, with utmost seriousness, and working to make it a healthy tradition by a shared commitment to creative teaching and scholarship.”

That was immensely important counsel for me then, and it still influences the way I see academic institutions that claim an evangelical identity. We are something like a religious order. And our “special vows” compel us to organize our academic life-together in certain ways, which—like the Jesuits—establishes some boundaries to the beliefs and practices that will shape the patterns of our communal callings.

That may be a good way of accounting for the mission of evangelical colleges, but again it doesn’t exactly fit the rhetoric of common ground. It’s like saying “we’re special but ordinary.” Folks like Peter Conn may not know the “all of life” rhetoric that pervades the evangelical ideal of liberal arts colleges or seminaries. He may simply have been replaying the tired trope of church dogma vs. intellectual freedom. But whatever Conn understands, I wonder if evangelical scholars and administrators understand that they are sending mixed messages.

I for one think the recent discussions have clarified why a Christian institution may be valuable. I used to wonder about them because I didn’t think that you needed faith or conversion in order to teach history or physics. Since I learned plenty of truth from non-believing historians and physicians, the idea of housing a group of Christians who could provide a liberal arts education did not not necessarily make sense. In the subject of Bible or theology, the religious commitment of a scholar could certainly be decisive. And so hiring only evangelicals to teach in a Bible or theology department at an evangelical college made perfect sense. But math? Or only hiring evangelical janitors?

The problem of hiring non-believing academics at a Christian institution, however, may be even more glaring than the gauzy ideals that cloud evangelical higher education. And this is one that Mouw addressed in the case of Jesuit universities. Why a Jewish biologist or an evangelical historian or a Mormon English professor is “on mission” with Roman Catholic higher education may be above my Protestant pay grade. But it is hardly clear that a non-Roman Catholic can support the aims of a Roman Catholic university unless that institution has lost some of its religious identity (thus provoking the rise of schools like Christendom or Thomas More).

So perhaps the best reason for an evangelical or Roman Catholic school is not the quality of the education. If you have to limit your pool of candidates to those only who can affirm a certain set of doctrines or even be “on mission” with a diosecan or religious order university, you are not necessarily getting the best professors. But if you are providing a wholesome environment for persons who are at a crucial period in their lives, when they are trying to figure out some kind of personal identity and autonomy, and may even be meeting a spouse, but they want to do so at a place where all of their previous associations will not be in jeopardy, then a college or univerity in which students are surrounded by supportive and relatively like-minded faculty, staff, and administrators makes a lot of sense. That’s not exactly going to be an institution that hires scholars who can win the Pulitzer Prize. In fact, it sounds a lot like the kind of Protestant and Roman Catholic colleges that were available to the Greatest Generation. But even if parochial and inferior academically, it provides quite a valuable service.

Accreditation to the Rescue (for real?)