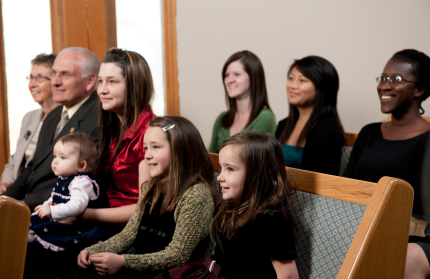 Recently, in a posting entitled “A Culture of Millstones,” Katharine Dalton has lamented the too-colorful language her children are exposed to in church – words like whore, prostitute, pole-dance, and sleeping around.  Apparently some pastors, four in particular that she cited, think church is a good place to offer commentary on current sexual mores, but Ms. Dalton does not appreciate the back-wash when asked by her children to explain the pastor’s unfamiliar language.

Sooner or later most parents get caught unprepared for a child’s questions about something “adult.” It is uncomfortable, not because we think children will never discover the matters they query, but only because we did not think they would ask about them so soon. These moments are inevitable, unless we prefer to be so disconnected from children that they are embarrassed to ask. In the final analysis it is better that they ask than not, and it is better that they ask us than someone else. On this point Ms. Dalton and I firmly agree.

It seems that Ms. Dalton is distressed that the ministers have chosen to speak so freely about adult matters in church.  And that raises another important question. Does the presence of children set the standard for what gets spoken of in church? In a time not long ago, the culture at large was configured differently than it is today.  Life was oriented around adult activities, and children were included only if invited and then on adult terms. That was also true in church.

Today kids rule. For example, families take children to restaurants and turn the table into a noisy feeding trough. The family departs, leaving the detritus of crumbled crackers, half-chewed bread, and French fries in various states of squish, littering the table and the floor. The server clears the trashed table, wipes down the seats, and sweeps up the garbage from under the  table, while others in the restaurant pretend not to notice because it would be déclassé to appear offended by the presence of children. In the interests of full disclosure I must admit that sometimes I am in the messy party. It’s fun, but I cannot get past the awkwardness of leaving food under the table. I crank about it, but it does not stop me from going to restaurants with children.

My point is this: times have changed. There are no longer many adult spaces in which children are not included. Children have rights. Woe to the maitre d’ who turns them away at the door. Yelp will hear about it. Woe to the adult who asks a child to leave the room because what is being broadcast on television is unsuitable. Consider the dramatic unfettering of television and movies over the last five decades. The Newlywed game popularized the expression “making whoopy” because it was not appropriate to talk openly about a sex act. Today those shows are boring. They have no edge. To hold an audience shows must push boundaries.

While network television is still hobbled by the old list of words that may not be used in prime time, there are few children anymore who have not already heard them either on cable television, at school, or at home when Dad hits his finger with a hammer or Mom spills her nail polish on the carpet. The “other” world with which adults may have entertained themselves in private in the past is now publicly available everywhere. It is not limited to sex or “potty-mouth.” It includes murder, mayhem, monsters, vampires, and terrorism. If it can be imagined, it will be portrayed. And kids will watch. Children as well as adults play violent video games. The dark side is available to kids on the internet because children are often more deft with computers than the adults in their households who try to put parental controls in place.

If parents really want to protect children from talk about sex, brutality, or other distressing matters, they will have to withdraw them from school after fifth grade and never ever let them ride the school bus. It is probably from their peers more than anywhere else that children first become acquainted with the vocabulary that can make parents wince. The divide between the world of children and the world of adults has eroded to the point that it is nearly gone.

With regard to Ms. Dalton’s complaint about the language of pastors that is too adult for the children in church, it is worth considering that the church is far tamer than the rest of the world children inhabit. Children are going to be exposed to sex and violence, and we will have to adult-up and be ready to talk with them about anything they drag home and ask about.  Let’s just hope they ask.

It is still worth considering why pastors are breaking the barriers of censorship with the language they use in their sermons. There are two possibilities. No doubt some pastors have bought into the idea that to hold onto young hearts you have to be cool.  That means knowing about their music, their movies, their sports, their TV programs, and the ways they talk about sex. It also means avoiding any portrayal of the church as old-fashioned, intolerant, or (worst of all) too serious. As a result of these pressures some mainline churches have revamped their mission so that Sunday morning is a gathering place for children and youth to which adults are cordially invited and at which they are often sadly out of place. It is a dramatic reversal of what church was once when it was a place for adults to gather and to which children, supervised by adults, were welcomed.

Ironically, even in hip churches adults still vastly outnumber the young. Even when the music, activities, and message are pitched to the young crowd, the youth are sadly absent. Maybe they are embarrassed by adults who try to act like kids. Maybe they see through the posturing that is intended to draw them in. If pastors are using edgy language in order to be cool so they can curry the favor of the young, then shame on them. It is working neither to attract the young nor to edify the adults who still want to come to church because they are looking for something meaningful.

There may be a second reason pastors use words like ‘prostitute” or “pole-dancing.” It may be a way of resisting the trend toward “juvenilizing” the church while preserving the church as a place where adults can talk about adult matters. If church is not always about the kids, they will survive. Imagine what it would model for children and youth if the Church were a place where adults honestly and candidly pause to reflect on the moments in life during which they stumble and create damage. Imagine if the church were a safe place to first admit the blunders and then consider if there is a way to go forward despite the damage?

Church is not kid stuff.  Nonetheless it might be a valuable counter for kids who watch TV and movies where they see adults shooting each other, seducing each other, and violating rules of decency and civility with abandon. Could it really harm children to be exposed to these same matters in church with adults who bravely assert that violence is not entertaining because real violence destroys people? Would children be offered a model of a different sort if they are allowed to be present while adults admit that sometimes infidelity is tempting but that in the long run loyalty is the better way? Might it be a relief for children to hear adults admitting that incivility is entertaining sometimes, but that it is trumped by civility because it is one of the simple everyday ways that allows people to get along?.

So back to Ms. Dalton’s complaint. I do understand that she is seriously concerned for her children growing up in a world that is often edgy and in which they will encounter things from which she wishes she could protect them. But the world – the real world in which they live – is not one that she will be able to modify to shield them from ugliness. The other alternative is to invite them into an adult world where these same matters are dealt with in a thoughtful and honest way. Rather than protecting children (because there is no way) we might consider that inviting children to be the audience to adult conversations that occur in church may be one of the last and best ways to empower children.