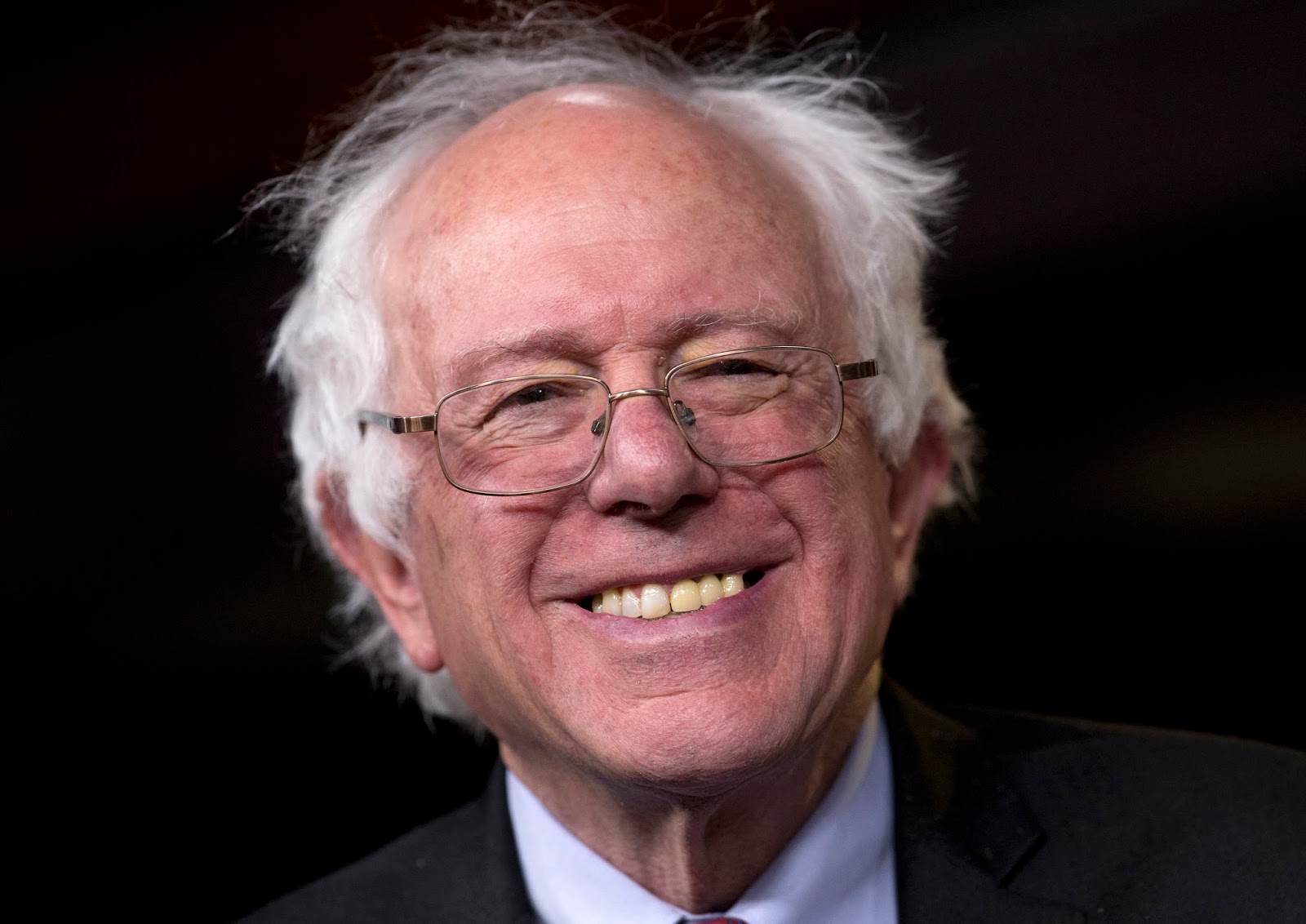 This October, Front Porch Republic will host its annual conference in Geneseo, NY, just a short day’s drive from Burlington, Vermont, the home current presidential candidate, Bernie Sanders. Senator Sanders will not, I am confident, make an appearance. But if he did (and who knows? this is a self-identifying democratic socialist who has accepted an invitation to speak at the conservative evangelical school Liberty University, after all) I wonder if both he and those attending the conference wouldn’t be surprised to recognize all the small yet important convictions they have in common.

Obviously, there are some pretty large obstacles in the way of any FPR-Bernie Sanders rapprochement, the fact that Sanders in an aggressive and unapologetic defender of abortion rights being just one of them. But if you can look beyond those hot-burning cultural issues, one can see (as I’ve pointed out before) that Sanders’s almost-certainly-quixotic-but-nonetheless-still-valuable crusade to force the Democratic party to wrestle more seriously with economic and political inequality in this country potentially has important localist, small-d democratic, and even conservative (properly understood) aspects to it. His opposition to America’s military-industrial complex, his defense of unions, his suspicion of fast-track trade agreements, his firm support for environmental sustainability, his displeasure with a theory of capitalism premised upon every-expanding consumerism, his push for maternity leave policies, even his advocacy of single-payer health insurance system: all can be understood as approaches that can aid in keeping families, neighborhoods, communities, and our physical environments intact and strong. Many might reject that particular kind of populist, Jeffersonian democratic localism–and, of course, a lot of folks will quite reasonably ask why it even matters, since fighting over our nation’s top political prize will do little to affect real, local cultural change. On that final point, I pretty much completely agree: what happens in our school districts and city councils and state legislatures is almost certainly far more important than who happens to occupy the top slot in our dysfunctional national government. But at the same time, one of the great things about having an actual democratic socialist–or at least someone who isn’t afraid to make use of the label–on the national stage is because it can help clarify things–particularly, just where one’s priorities are, and that’s the sort of thing which really can matter locally.

So, consider the one of the latest in a series of reasons why Bernie Sanders–supposedly the most left-leaning serious presidential candidate to be found anywhere in the land–sometimes seems oddly (and, for some progressive liberals, off-puttingly) “conservative.” No, not the complicated case advanced by some activists that Sanders’s focus on social and economic justice implicitly makes him dismissive of racial issues (an accusation that more than a few Republicans have picked up and ran with). Rather, consider a recent interview in which Sanders was pressed to embrace the “international” perspective presumably baked into his own quasi-socialist views, and instead shocked his interview by making it clear that he believes the whole idea of an “open border” world, wherein immigration and global movement of persons could take place without much (or perhaps even any) regard to citizenship and sovereignty, is basically an idea that only those on the side of powerful corporations who benefit from cheap labor could love.

It was hard for his liberal interviewer to wrap his head around the idea that someone who supported the equal treatment of persons would structure that support in terms of defined community: in this case, in terms of the American nation-state. Sanders’s own words make it clear he’s no xenophobe (“I think what we need to be doing as a global economy is making sure that people in poor countries have decent-paying jobs, have education, have health care, have nutrition for their people…that is a moral responsibility”), but in failing to properly burnish his globalist bona fides, it wasn’t long before libertarians and the business-capital-friendly factions of the Republican party figured they had Sanders’s number. Turns out he’s a “tribalist,” a “nationalist” (and quite possibly a Nazi to boot), a “fascist,” and a “plutocrat who hates the [global] poor.” Even allowing for the hysterical and often at least partly tongue-in-cheek accusations which social media today invariably encourages, it is genuinely striking just how much disbelief and invective can be generated when someone on the national stage unapologetically argues that allowing the economic benefits of international capital to tumble forth upon all individuals in the aggregate might not, actually, be the best possible recipe for either a just society or a healthy democratic community.

I will happily grant that it is no more obviously an economic good to focus on the jobs and wages of a defined community than it is to explode those definitions so as to enabled goods and persons to travel everywhere that global capital calls them. The economics of immigration are complicated–and they aren’t done any favors when defenders of Sanders trot out statements like this one by Richard Eskow which include multiple easily disputable claims. Eskow’s piece isn’t nearly as bad as some online commentators suggest, but it does make some pretty egregious groaners, such as comparing the open borders concept to exploitative guest worker programs, which isn’t so much a case of comparing apples and oranges as one of comparing apples and barbed wire. Still, it’s not as though the attacks on Sanders’s priorities always make that much sense either; in this piece by Daniel Bier, the strict economic prioritarianism is so blinding that the man doesn’t need any cultural filters; he obviously can’t see the cultural variables and consequences at work in his open borders thought experiment even though they directly involve some of the most broadly and hotly discussed sociological realities in the world today.

(I’m thinking here specifically of Bier’s dismissal of the protectionist claim made on behalf of Sanders’s caution regarding the consequences of flooding a specific market with workers; Bier simply asserts that, since “the economy is a dynamic, organic system that creates jobs in response to supply and demand,” the market will always effectively handle any changes: after all, he snarks, “the dramatic increase in women’s participation in the labor force over the last 60 years did not drive men out of the job market.” Now, that’s technically true…if, that is, one looks at raw numbers and basically nothing else. However, even briefly perusing this or this or this or a hundred other studies which chart the gender-specific consequences of America’s movement towards a more egalitarian, post-industrial economy over the past two generations, makes it clear that, far from seamless adaptation, there have been huge externalities to this change. Please note: I am absolutely not suggesting a general reversal of those changes–there are far too many social benefits and historical factors involved for anyone who isn’t a determined reactionary to even pretend to such a posture, I think. By the same token, Bernie Sanders, even if he isn’t a complete enthusiast for unlimited immigration, absolutely recognizes the moral as well as economic need to be conscious of the global changes and pressures always ongoing around us. It’s just that he clearly feels a need to be responsible to other, cultural and communal priorities as well, and strives to strike balances accordingly.)

Insisting that cultural goods both should be and frankly are inseparably entwined with economic calculations is–for presumably pretty basic philosophical reasons–often simply infuriating to many liberal individualists. Poor people are starving, less-poor people are willing to pay them to mow their lawns, the poor people can get food money from those transactions, after which they won’t starve: QED! Therefore, allowing one’s culture to create obstacles to poor people getting to where the life-saving contracts can be found can only be labeled a tyrannical horror. And if human beings really did live at 35,000 feet, surveying the patterns which emerge below (“look, cultural disruption here, followed by a new local synthesis over there!”), I suppose I might agree that making policy judgments solely a matter of calculating aggregates is all that would be necessary.

But this is where the Front Porch comes in–we humans (most of us, most of the time, anyway) aren’t actually moral surveyors, but rather embedded creatures, whose affections and attachments and identities put limits upon our priorities and valuations: limits that need to be acknowledged for the meaningful phenomena they are. Cultures aren’t something that only “natives” have; we all contribute to and are shaped by such social patterns, and to treat such embeddedness as always and easily trumped by the suffering which exists in the world (especially given that our understanding of suffering is itself a culturally formed understanding!) is, I think, highly simplistic. Does that mean I agree it is always defensible to express cultural limits in terms of, say, national borders that have less than an absolute openness to all others who wish to immigrate to their country? Not in the least, because to refuse to acknowledge the ways that nationalism can become unjustly exclusionary is both stupid and immoral. Which is something Senator Sanders knows, a knowledge that is reflected in both his support for the DREAM Act but also his opposition to many de facto guest worker programs pushed, in his view, primarily by large corporations. You can dispute the effectiveness or morality of that particular balancing act, but at least its an acknowledgement of the necessary–even, in some way, the enriching–limitations on what it takes to build democratically expressed principles into the structures of society. Harold Meyerson defends this conservative insight from a social democratic perspective; the fact that it finds very little historical or theoretical defense from those who speak from a strongly neoliberal/capitalist or libertarian perspective (which are, of course, pretty influential strands amongst the mainstream of both the Republican and Democratic parties) is exactly the reason why Porchers, and others, may appreciate the clarity that Bernie Sanders’s crusade is forcing into our political discourse.

Not that I, or anyone who pays attention to such things, ought to expect Sanders’s campaign to actually change much about American political discourse (no more than we ought to expect that Sanders might actually, you know, win). Such radical changes in the direction of left conservative insights can only emerge from long, hard, patient, everyday work amongst ones neighbors and communities and friends. But for now, this particular localist-populist-egalitarian is happy we have a democratic socialist generating conversations–and not just about immigration. The more all this news coverage even just accidentally induces sproductive rethinking about both the social importance and the moral limits of communities (include national ones), the better. If nothing else, it may make the local and cultural arguments which need to happen that much easier to start.