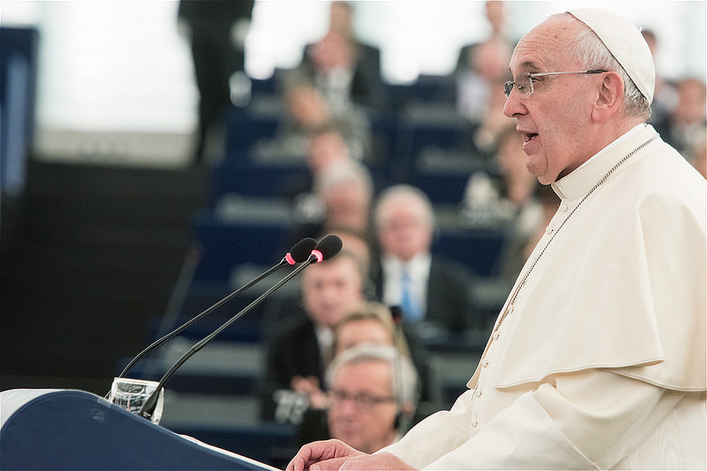 For many, this summer was long, hot, and awful — at least politically; no one particularly recalls the weather. Why so rotten? Laudato si’, Obergefell, Planned Parenthood, and Trump.

The less said about Trump the better, a judgment many people also have made about Laudato si’, Pope Francis’s encyclical on the environment. After some initial eye-rolling and murmurs about competence on scientific matters, the document was largely ignored, replaced as a topic of conversation by gay marriage and the booming trade in fetal organs.

This is a mistake. For however flabby Laudato si’ seems at first glance, the document, as I read it, is a gift from the Holy Spirit at just the right time. In the divine pedagogy, its May release was a rebuke to the June errors of Obergefell and the horrors of Planned Parenthood in July and August.

Of course I am not referring to the encyclical’s statements about climate change, which, as rooted in scientific understanding are entirely revisable, even reversible (although they may also be true). But given all the sound and fury on global warming, too few have given adequate attention to the abiding and non-revisable theological teachings forming the encyclical’s core, and which are beautifully and powerfully articulated.

And which preemptively refuted Obergefell and condemned Planned Parenthood and all the other collaborators in the culture of death.

In its central sections, Laudato articulates a theology of creation, one of the most neglected doctrines of our time. As Francis reminds us, creation says more than nature, for while nature is “usually seen as a system which can be studied, understood and controlled,” creation “can only be understood as a gift from the outstretched hand of the Father of all.” Understood as a gift, the world is not reduced to simply being there for us to use or dominate. Moreover, when we think of the world as a formless and undifferentiated resource awaiting our will and use, we simultaneously misunderstand our own being, thinking ourselves lords and masters rather than stewards called to till and keep the world on God’s behalf.

God has no real need for us to do anything, but “in some way sought to limit himself” so as to “draw us into the act of cooperation with the Creator.” God makes the world open to the contributions of our own intelligent labor so that we could be co-laborers and co-redeemers with God. Consequently, “the best way to restore men and women to their rightful place” — the best way to understand and safeguard our own rightful status and way of being — is to put an end to any “claim to absolute dominion over the earth” by speaking “once more of the figure of a Father who creates and who along owns the world.” Without the Fatherhood of God, “human beings will always try to impose their own laws and interests on reality.”

And not imposed only on the external reality of the natural world — Francis is not speaking solely about trees and water, but about us. If we forget the meaning of creation, what Francis terms the “technocratic paradigm” flourishes, with its disordered vision of “possession, mastery, and transformation.” Rather than a friendly universe which “meant being in tune with and respecting the possibilities offered by the things themselves,” we are now “the ones to lay our hands on things.” Humans become yet more resource to master, to dominate, and to own.

Fundamentally, in viewing the world from the standpoint of domination, we disorder and harm ourselves, for in rebelling against the fatherhood of God and the gift of creation we rebel against our own proper being as creature and co-redeemer. So deformed in thought, we should hardly be surprised to find perversions of law and action. In our patricide, we seize “hold of the naked elements of both nature and human nature.” That is, we view all being, even that of our own selves, as something to dominate.

In the end, Obergefell and Planned Parenthood are not simply mistakes about liberty and human rights but reveal a deep disgust and repugnance at the created order. Presented with a gift from the divine Father, the technocratic mind see only an occasion to exercise liberty as they see fit, without thought for order, limits, gift, and the logic of love.

In Acedia and its Discontents, I recount the character of Judge Holden from the novel Blood Meriden by Cormac McCarthy. The judge is almost satanic in his hatred of life, his disgust at reality. In one memorable scene, he explains why he sketches birds and artifacts in his notebook before killing, maiming, and destroying what he’s just drawn: “Whatever in creation exists without my knowledge exists without my consent … . Only nature can enslave man and only when the existence of each last entity is routed out and made to stand naked before him will he be properly suzerain of the earth.”

A suzerain, he says, is a ruler who can countermand the judgment of all other rulers — even God’s judgments. On this view, the human can be free only when superior to God.

In this feverish summer of revolt, a sane Pope spoke truth, and no one listened.

R. J. Snell is professor of philosophy at Eastern University in St Davids, PA and director of the Agora Institute for Civic Virtue and the Common Good. His most recent book is Acedia and its Discontents: Metaphysical Boredom in an Empire of Desire.