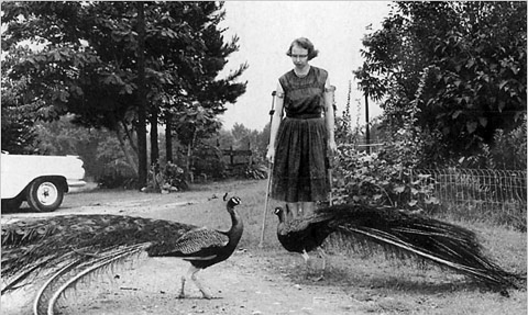 This Lent I have been reading the Letters of Flannery O’Connor: The Habit of Being. They may not seem like proper Lenten reading. The letters are not a spiritual manual or even particularly concerned with spiritual improvement. But when O’Connor does give spiritual advice it is of intense focus and reading the letters with the knowledge that O’Connor was dying of Lupus makes the advice even more poignant.

I’d like to focus on one letter in particular and how it gives Catholics, who find themselves troubled, even scandalized, by Francis’s pontificate a framework to make sense of and come to terms with the bitterness they feel. The letter I will focus on is to the writer and playwright, Cecil Dawkins.

It appears — we can only see O’Connor’s reply to Dawkins — that Dawkins wrote to O’Connor to express her displeasure regarding the state of the Church at the time (1958). In particular, Dawkins appears to have been concerned about the “vulgarity, the lack of scholarship, [and the] lack of intellectual honesty” found in the Church.

I’ve been highly critical of Pope Francis, but even more than that I have allowed myself to be scandalized by his actions and inactions. In allowing myself to be scandalized I have indulged in a sort of childish fearmongering that could lead to scandalizing others, and at the very least is damaging to my own faith and how I relate to the Church. I have allowed myself the indulgence of being a “little one.”

I’ll point out quickly here that Pope Francis is not beyond reproach and that viewing his actions critically is without a doubt worthwhile at times. But among traditionalist Catholics (myself included) there has been a distressing tendency to view almost every aspect of this pontificate through a narrative of irreversible decline. And this has led to bitterness among many traditionalists in how they relate to the Church.

Why is this? To answer this question I will return to O’Connor and her advice to Dawkins along with a quick overview of how many traditionalists viewed Pope Benedict XVI. O’Connor advises Dawkins that “to expect too much is to have a sentimental view of life and that is a softness that leads to bitterness.”

Many Catholics viewed Pope Benedict as an intellectual giant, one of the last great men of Europe. They saw in him an ally in their fight for liturgical beauty and a man of philosophical brilliance. He is undeniably all of those things, but along the way in some quarters that admiration gave way to a sentimentalist hero worship. As O’Connor wrote, sentimentalism is a softness that leads to bitterness.

Many Catholics were stricken when Pope Benedict abdicated but they believed or stridently hoped that an even more tradition-friendly Pope would be elected and when Francis was elected they were confused, and as Pope Francis’s pontificate has gone on this confusion has turned to bitterness.

This bitterness is the result of viewing the papacy through a lens of sentimentality. Taking a sentimental view of life is immature and spiritually damaging and when the sentimentalist is inevitably scandalized by human nature he will likely spread his scandal to others. When you read the laments of, especially traditionalist Catholics, about Pope Francis with this in mind, you will immediately see that often these are not people suffering for their steadfast refusal to turn away from the ugly truth but instead these are people suffering from an excess of sentimentality.

O’Connor goes on to advise Dawkins that “the Church is founded on Peter who denied Christ three times and couldn’t walk on water by himself. You are expecting his successors to walk on water.” It is often assumed that the bitterness of traditionalist Catholics comes from being realistic and un-sentimental, but just as often, it’s the opposite. Think of how disappointing it can be for an adolescent who grew up idolizing a baseball player to find out that his hero is actually a cretin. This is not a perfect analogy, but it does get to what O’Connor means by being a “little one.”  We must work hard to have a grown up faith that doesn’t indulge in sure-to-be-disappointed papolatry or the false realism that leads to cynicism.

My purpose, and I believe O’Connor’s, is not to counsel stoicism or quietism in the face of distressing trends, but to argue for a mature response to them. We must resist the childish urge to luxuriate in bitterness and scandal about Pope Francis. Many conservative and traditionalist Catholics have replaced their spiritual life of prayer and hope with bitterness. They’re not always aware of it though because they believe they have earned their bitterness. Indeed, most have fooled themselves into believing that it is concern, and not bitterness. A mature response, as O’Connor says in the same letter is “to try to change the external faults of the Church” for the better, but she ends by saying that just as often we do this “by suffering on account of it.”

Catholics who find themselves bitter over what they perceive to be the new direction of the Church would do well to keep O’Connor’s advice to Dawkins in mind. I tend to find myself on the same side as those who are dissatisfied, but the main lesson I take from reading O’Connor’s letters is that that suffering must be borne in a spiritually mature way. O’Connor was no stranger to suffering as we see in her own struggle with Lupus and also when we encounter the grotesque renderings of human disfigurement (both physical and spiritual) in her stories.

O’Connor began her letter to Dawkins by saying that “Glibness is the great danger in answering people’s questions about religion.” She’s right. It has also been a great danger whenever people write about “trads” or “neocon Catholics,” or “Novus Ordo Catholics.” I hope I have avoided this danger in this piece. This Lent we should all pray that we are like the “little ones” Christ called to Himself rather than the childish “little ones” that O’Connor describes as we make our way toward Easter.